At the start of November FinFeed highlighted the importance of Latin Resources’ (ASX: LRS) success in having exploration rights granted in relation to 7 mining tenements totalling more than 70,000 hectares.

Furthermore, there was the potential for further upside should the company be successful in its application for additional exploration tenements totalling more than 7000 hectares, the outcome of which was expected in a matter of weeks.

News released by the company yesterday indicating that the final two exploration tenements had been granted for exploration rights by the Mining Authority of the Catamarca province in Argentina was well received.

As highlighted by management this now brings the total area of exploration concessions granted to 76,700 hectares. Investors were quick to pick up on the good news as the company’s shares rallied 17% from 1.2 cents on the previous day to close at 1.4 cents.

It should be noted that this is an early stage play and share trading patterns should not be used as the basis for an investment as they may or may not be replicated. Those considering this stock should seek independent financial advice.

The two exploration tenements just granted cover the Vilisman and Ancasti project areas. Importantly, each has a history of lithium mining activity, together hosting more than 20 lithium bearing pegmatite deposits documented by various authors in publications made over the last 50 years. 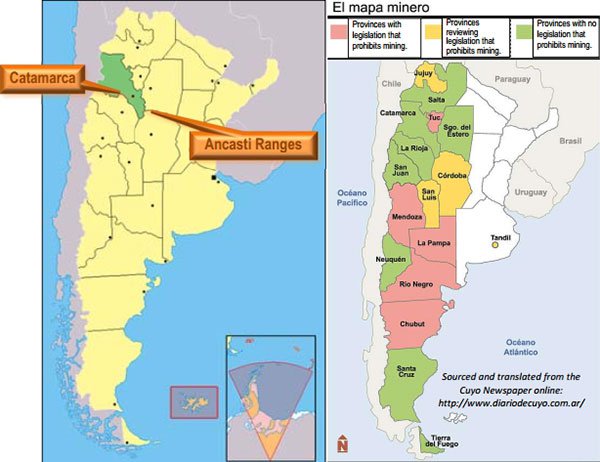 Management noted that combined estimates of spodumene content within 15 metres of surface of 12 of the deposits within the final two tenements now granted are in excess of 120,000 tonnes (Acosta et al 1988, Balmaceda & Kaniefsy 1982 and other non-JORC foreign publications).

Consequently, that is one of the tasks now facing LRS, and the necessary drilling and exploration work should commence once the company has received its Environmental Impact Report (EIR).

On reflection though, some of the data has been extremely impressive with analysis of three samples collected by Latin geologists from old mine workings into pegmatite deposits within the final two tenements now granted reporting grades of 7.1%, 6.3% and 4.9% lithium dioxide.

Summing up these developments and the current state of play, LRS’s Managing Director Chris Gale said, “The granting of the final two concessions allows Latin Resources to commence drilling once the approval of the permit occurs with the added bonus of not only having lithium rich pegmatites in our concession package, but existing historical lithium mines to drill, an incredibly encouraging position for our exploration team”.

With the EIR and drill permits expected to be approved in coming weeks, management has flagged December as a likely commencement date for drilling.

This suggests 2017 will be an exciting year for the company as exploration results come to hand and mineral resource estimates are prepared.