While treatments for pain management per se may not receive as much attention as those related to cures for chronic diseases, every day there is a large universe of people who attempt to treat but mismanage agonising and debilitating conditions in trying to control the uncontrollable.

In the US alone, 2018 data from the Disease Control/National Centre for Health Statistics indicated that 128 people died each day after overdosing on opioids.

The Centres for Disease Control and Prevention estimates that prescription opioid misuse alone costs the US economy US$78.5 billion a year, including the costs of healthcare, lost productivity, treatment for addiction and crime.

Opioids do not treat inflammation which is often the primary cause of pain, as they merely block pain signals.

Furthermore, opioids may not be useful for treating chronic pain over the long term because the body becomes tolerant to the drugs.

The field of pain treatment needs alternatives and regenerative medicine is one of the options being recognised by big pharma, corporate enterprises and global health organisations.

There is reason for this: the global market for osteoarthritis is expected to grow to US$3.5 billion by 2026 with the Japanese market making up 10 per cent of this at $350 million. The potential osteoarthritis patient population is 25.6 million in Japan with 1.25 million people receiving treatment, and this number rises each year.

Japan is an important market for regenerative medicine company Regeneus Ltd (ASX:RGS), which has just signed a collaboration and licence agreement with Kyocera Corporation (Kyocera, TYO:6971) to develop and commercialise Progenza for Knee Osteoarthritis (Progenza OA) in Japan.

This provides Kyocera with an exclusive licence in Japan to develop and commercialise Regeneus’ lead mesenchymal stem cell (MSC) and secretome technology Progenza, for the treatment of Knee Osteoarthritis (Knee OA).

Importantly, Regeneus retains the rights to negotiate licence agreements with other parties for regions outside of Japan for Progenza OA and all regions for Sygenus, their secondary platform.

Under the terms of the agreement, which is a major milestone for Regeneus as it moves its lead technology Progenza to commercialisation stage, the company will receive upfront and milestone payments of AU$27 million from Kyocera.

Payments consist of AU$13 million upfront, of which A$2 million was part of a MOU signed in March.

There will be a further AU$14 million in regulatory and development milestone payments.

Importantly, the terms of the agreement will see Kyocera fund all development, regulatory activities and commercialisation costs for Progenza OA in Japan.

The benefits of a significant upfront payment can’t be understated as they provide Regeneus with a cash runway until the commercial launch in Japan. 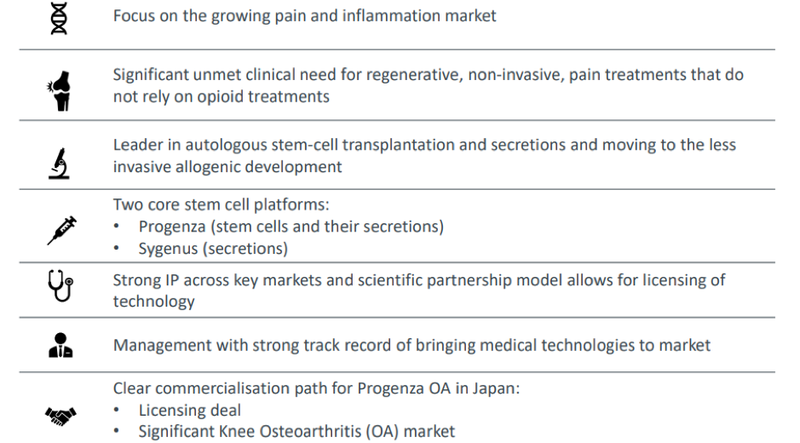 Japan appears to be leading the way in adopting stem cell technology, and more recently two other ASX-listed companies have also drawn the attention large players in the medical development sector.

Mesoblast (ASX: MSB) and Cynata Therapeutics (ASX: CYP) are two other companies in the stem cell space that have also done deals with Japanese companies.

This development triggered an upfront fee of US$3 million from Fujifilm.

As recently as the June quarter, Mesoblast, a prominent player in developing allogeneic cellular medicines received royalty payments from JCR Pharmaceuticals of Japan for the sales of its TEMCELL HS product used for the treatment of aGVHD.

These deals could bode well for what is ahead for Regeneus.

Osteoarthritis is the most common form of arthritis, and is often referred to as the ‘wear and tear’ around the tissue of joints, characterised by pain and inflammation.

While it can damage any joint, it commonly affects joints in the knees, hands and hips.

With Progenza addressing a large unmet patient need for knee OA ahead of invasive surgery by treating pain and modifying the disease, Regeneus can potentially snare a significant share of the lucrative $350 million Japanese market, if not the broader $3.5 billion market. 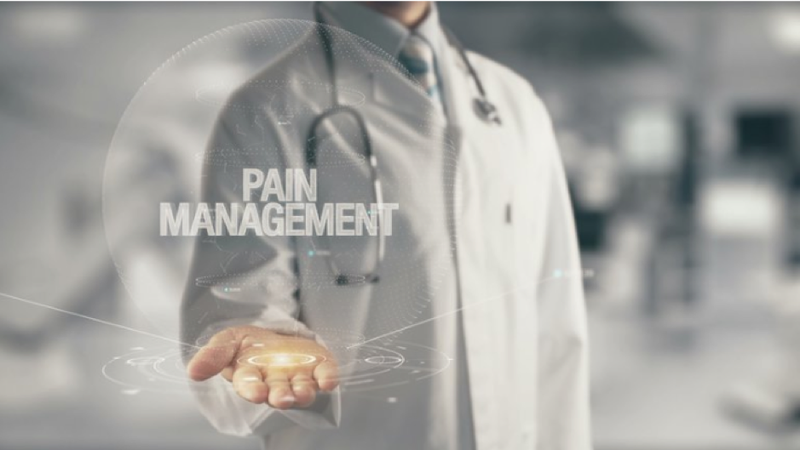 Progenza OA (osteoarthritis) has already completed a Phase I study which met all safety and efficacy endpoints.

The study demonstrated that a single injection of Progenza OA into the knee was safe, tolerable and showed significant, rapid and sustained reductions in knee pain for osteoarthritis patients.

The Phase I study of Progenza in OA patients demonstrated significant treatment-related reductions in pain for up to 12 months, as well as stabilisation of cartilage volume in the target dose group.

In turn, this down-regulates pain-causing signals and repairs damaged tissues, such as cartilage tissue, commonly found in joints such as knees and elbows.

Relationship follows prior agreements and due diligence

The commercial licence agreement follows Regeneus and Kyocera signing a Memorandum of Understanding (MOU) in March 2020, and Kyocera completing detailed due diligence on Progenza OA.

Throughout this period, Regeneus also received two upfront payments from Kyocera of JPY200 million (approximately A$3 million) with the first payment made on the basis that Kyocera receive exclusive negotiation rights to the Progenza platform technology.

The upfront payment from Kyocera of AU$27 million will provide balance sheet strength until the commercial launch of Progenza OA in Japan. 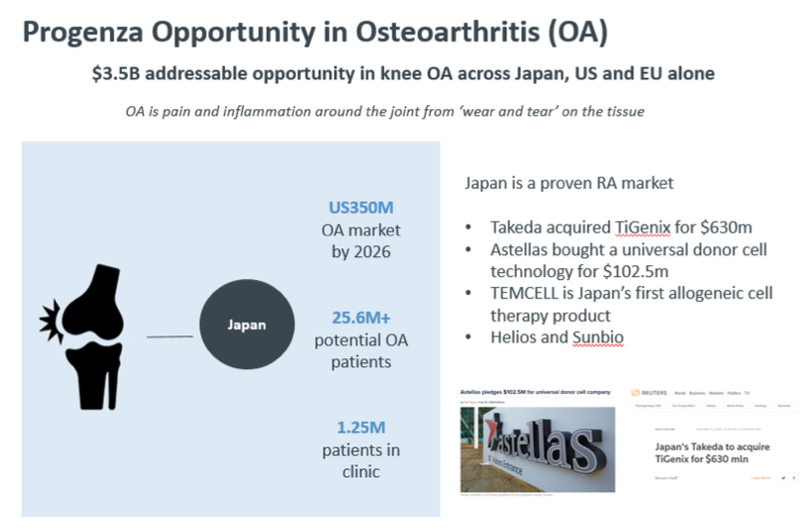 Commenting on the multiple benefits of these events, Regeneus chief executive Leo Lee said, “This agreement with Kyocera is an exciting development for Regeneus and is an endorsement of our Progenza platform technology.

“It provides a clear commercialisation pathway for Progenza and is a significant market given osteoarthritis potentially affects more than 25.6 million people in Japan alone.

“We look forward to working with Kyocera to take Progenza OA through the commercialisation process.”

Japan has a favourable regulatory environment for regenerative medicine and there is potential to fast track approval for Progenza as products can be approved for sale under specific conditions once safety and efficacy are confirmed.

Progenza met all safety and efficacy endpoints in a Phase I study in 2018.

Kyocera will work towards marketing approval for Progenza OA pending completion of a Phase II study. 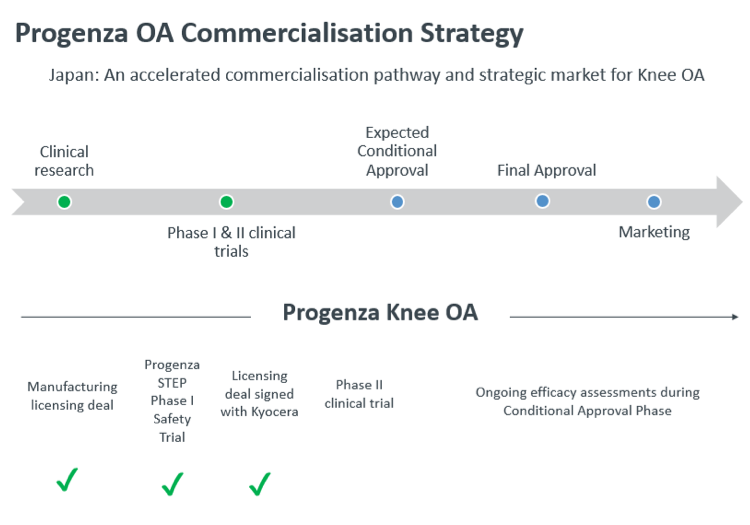