The news is a major re-rating for the company as moves towards commercialising its lead stem cell platform technology, Progenza, in Japan. As part of the MOU, Regeneus receives approx. $1.4 million up front.

This news was also well received by the market, reflected in the 19% increase in Regeneus' share price in a day when the broader market was down around 3% at midday.

Kyocera’s life sciences business is prominent and they are a major Japanese producer of medical and dental products, including artificial joints for the knee and hip. The company is listed on the Tokyo Stock Exchange, and it has a market capitalisation of approximately 2.5 trillion Japanese yen (AU$35.6 billion) - almost triple the size of Cochlear.

As a regenerative medicine group using stem cell technologies to develop a portfolio of novel cell-based therapies, Regeneus has plenty to offer Kyocera.

More specifically, the company’s regenerative therapies seek to address unmet medical needs in the pain market with a focus on neuropathic pain, including osteoarthritis and various skin conditions, with its platform technologies Progenza and Sygenus, with the former being of particular interest to Kyocera. 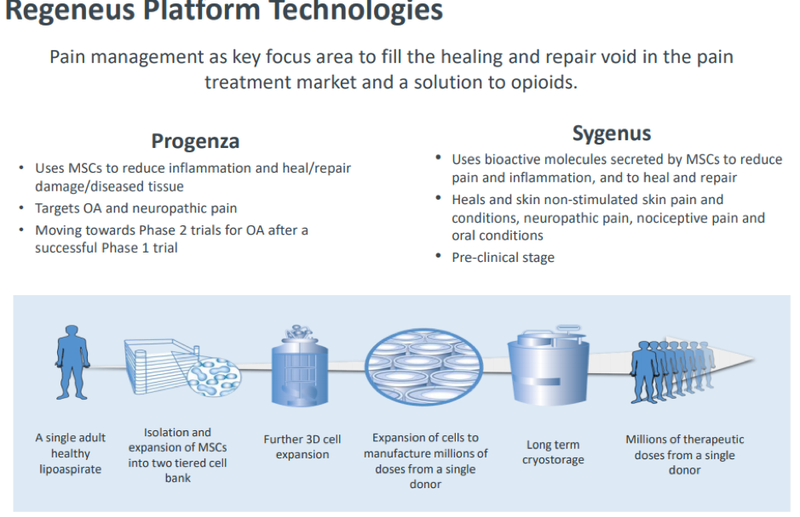 As part of the MOU, Kyocera will provide an upfront payment of 100 million Japanese yen (~$1.4 million) to Regeneus for the rights to a subset of research knowhow for Progenza. This is a demonstration that Kyocera recognises the potential of Regeneus’ technology platform.

Kyocera will also conduct comprehensive due diligence related to Progenza before progressing to a conditional commercial agreement for the company’s lead technology.

At the conclusion of due diligence, Kyocera will provide an additional 100 million Japanese yen upon meeting the criteria outlined in the agreement, which is refundable if an agreement is not executed.

The upfront payment from Kyocera helps Regeneus expand its pipeline and fund its innovative technology to commercialisation.

Considering osteoarthritis is a $9.5 billion addressable opportunity and Japan alone has more than 30 million patients with osteoarthritis, Regeneus is well positioned to capture the market with this latest announcement. 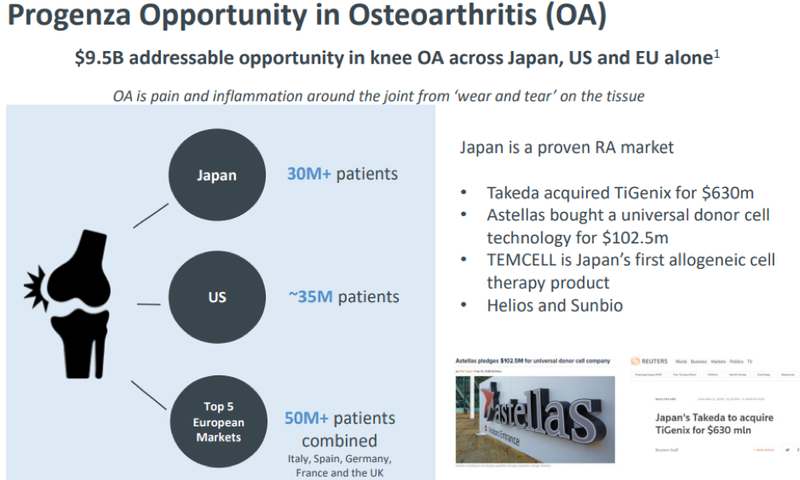 Regeneus’ announcement is the latest in a string of successful deals Australian regenerative medicine companies have made with ‘big pharma’ and overseas conglomerates.

For example, Cynata’s 2017 partnership agreement with FujiFilm (like Kyocera, another Japanese giant) for their stem cell therapy product targeting graft versus host disease included a 9 per cent equity and potential future milestone payments. In the time since the announcement, Cynata’s share price has risen almost 19 percent and is now a company worth ~$100M.

Similarly, Mesoblast’s strategic partnership with Grünenthal announced last year to develop an allogenic therapy for low back pain was well received by the market, and the company’s share price has since risen 28 per percent with the company now worth more than $1.2 billion dollars.

Of course, each of these regenerative medicine companies is further along their commercialisation journey. However, it is clear that at just 6 cents, Regeneus is currently under-appreciated by the market despite the significant addressable opportunity for Progenza OA.

As outlined by management in November 2019, the following was the state of play at that stage, indicating that the company has been quick to deliver on its strategy. 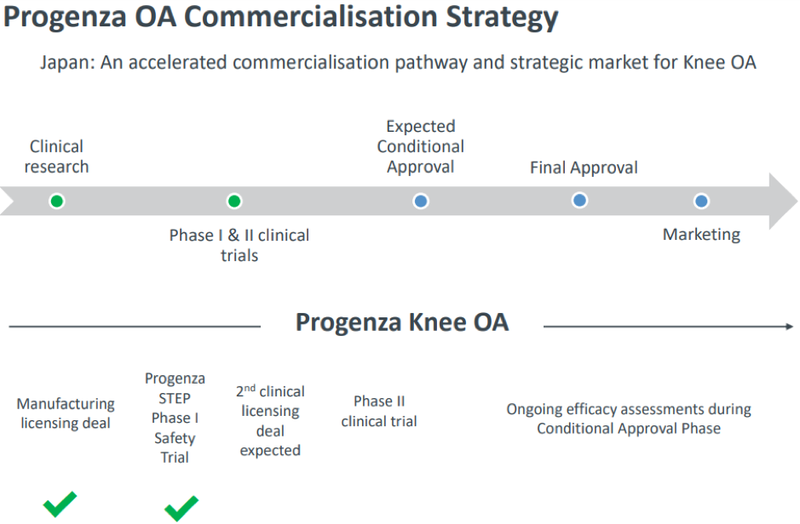