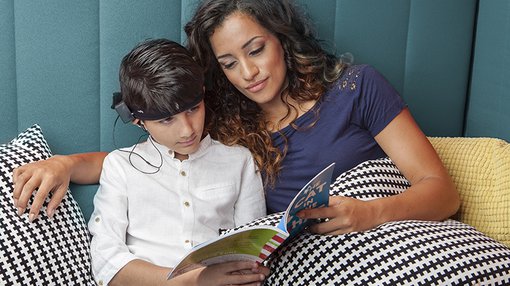 Neurotech International Limited (ASX:NTI), developer of medical solutions improving the lives of children with autism, has received promising results from the US clinical trial of its Mente Autism device.

Furthermore, these have been recognised by leading medical journal Frontiers in Neurology.

The study, administered by Carrick Institute, was a randomised-controlled, double-blind investigation that compared Mente Autism with a Control (or sham) device over a 12-week period.

The trial was designed to ascertain the consequences of the Mente Autism neurofeedback treatment, with a variety of outcome measurements examined to assess the effectiveness of the device including analysis of brain activity, balance and behaviour.

Evaluations were conducted at enrolment and again after the conclusion of the 12-week home-based therapy.

The results showed significant positive changes, post therapy, in the Active group across all three areas of brain activity, balance and behaviour.

Crucially, similar changes were not observed in the Control group.

Autism can present in a variety of ways and impact areas such as balance, behaviour, social skills and the ability to communicate.

There was a significant reduction in brainwave frequency bands of interest which are typically abnormally high in children with autism.

Participants in the Active group demonstrated improved balance with their eyes open rather than closed, the opposite to what is generally experienced by autistic children.

There will be further results to come from these studies as the trial continues, so interested investors should seek professional financial advice for more information.

The participants ranged from ages 5 to 17, and during the course of the trial no problems were encountered with tolerance, and this was reflected in the zero dropout rate.

Given the limitations of traditional neurofeedback, including considerable cost, time and effort from parents and their children to attend sessions in clinical environments, the outcomes of the study suggest Mente Autism is uniquely placed to target autism as a home-based neurofeedback tool.

To have the parents of the autistic children say their social interaction and communication has improved post therapy, and have this supported by the science, are key outcomes we have targeted with Mente Autism from day one.”

Shares in NTI rerated strongly on Monday morning following release of the news.

Paves the way to progress to FDA submission

Storf said that the results provided the company with a strong basis to move toward an FDA submission, as well as progressing a sales program for Mente Autism, which will be made available through its distributors.

It is targeted for the third quarter of calendar year 2018 with Neurotech expecting to market Mente Autism as a Class II regulated device in the US, supported by this clinical data.

In parallel, manufacturing for the next batch of Mente devices is well underway, with the first devices expected to be ready by the end of July, and initial shipments recommencing in August.

Home use a substantial benefit

These developments are expected to raise awareness about neurofeedback as one of the non-invasive and non-drug induced tools to help parents of children with autism.

Mente Autism takes this one step further, by not only allowing neurofeedback to be readily accessed at home, but also reducing the costs and strain on parents, children and health systems, in what can be particularly challenging situations.

While the emotional and financial benefits are material for parents of children suffering from autism, from a clinical perspective, the fact that this device could potentially reduce strain on government health systems should be viewed favourably by the medical community.

This was reinforced by Professor Frederick Carrick, lead author of the Frontiers in Neurology publication in saying, “When we first designed the study, Mente Autism was of interest as it is a novel tool that takes clinical neurofeedback, an established non-invasive biofeedback approach for the treatment of autism, and makes this really accessible as a treatment option for parents of children with autism.

Carrick noted the positive feedback and gratitude received from parents in the Active group, who noticed improvements in communication and social skills in their child, indicating Mente Autism’s potential to be considered as a complementary therapy for autistic children.

Neurotech expands exclusive license to include all neurological disorders