Look beyond the gold price part 3: Finding value in the high-flying gold sector

As we have spent the week working through some of the ways to cherry-pick the best gold stocks at a time when share prices are surging, the price of the precious metal has continued to make new all-time highs.

In part one I discussed the importance of production costs in evaluating good value gold stocks, and yesterday I highlighted the benefits of targeting gold-copper stocks because the credits from the sale of copper production effectively drive down production costs (AISC).

While we have provided examples of some of the big players such as Newcrest Mining (ASX:NCM), Oz Minerals (ASX:OZL) and Saracen Mineral Holdings (ASX: SAR), it was obvious that the share prices of those companies had already run strongly.

The next big things in the gold-copper space

Today will be examining companies with projects being progressed by emerging players in highly prospective gold-copper regions of Australia, South America and Alaska with a number of those located in close proximity to projects being run by blue-chip miners.

By focusing on smaller companies, we will be looking to uncover stocks that have similar exposure to the same dynamics that are driving the market, but because of their size their share prices are at a stage where there is scope for significant upside.

That said, as you will see, such is the quality of the locations and exploration results as well as the calibre of management teams, a number of the companies have already received strong share price support, but I expect more of the same throughout 2020 and beyond.

The beauty of targeting companies in the exploration phase is that there is usually a constant flow of news with the likes of exploration results, resource upgrades and studies often triggering significant share price re-ratings.

I have identified a six-pack of emerging companies that could muscle their way into the gold-copper space in the not too distant future, three of which we discuss today and three of which we will feature next week.

Ausquest is a prime example of investors piling into a stock in the expectation that drilling results could be market moving.

The company informed the market on 16 July that drilling had been approved for its Gunanya project in the Paterson region of Western Australia, followed by a drilling update on 21 July, with the latter outlining the highly prospective nature of the region where Rio Tinto and Newcrest have both had success.

Ausquest’s shares subsequently spiked 80% in just over a week without the drill bit even hitting the dirt.

It is worth noting that blue-chip mining group South32 (ASX: S32) is funding exploration work at Gunanya

The Gunanya Gold-Copper Project is located about 250 kilometres north-east of Newman within the Paterson Province of Western Australia.

It consists of one Exploration Licence covering an area of 450 square kilometres.

These recent exploration breakthroughs have significantly enhanced the gold and copper pedigree of the Paterson Province, which already hosts the large gold and copper deposits at Telfer (Newcrest) and Nifty (ASX: MLX), and is widely regarded as one of Australia’s current exploration “hot spots” with activity levels continuing to ramp up.

The following map shows the location of Gunanya relative to Winu, Havieron, Telfer and Nifty. 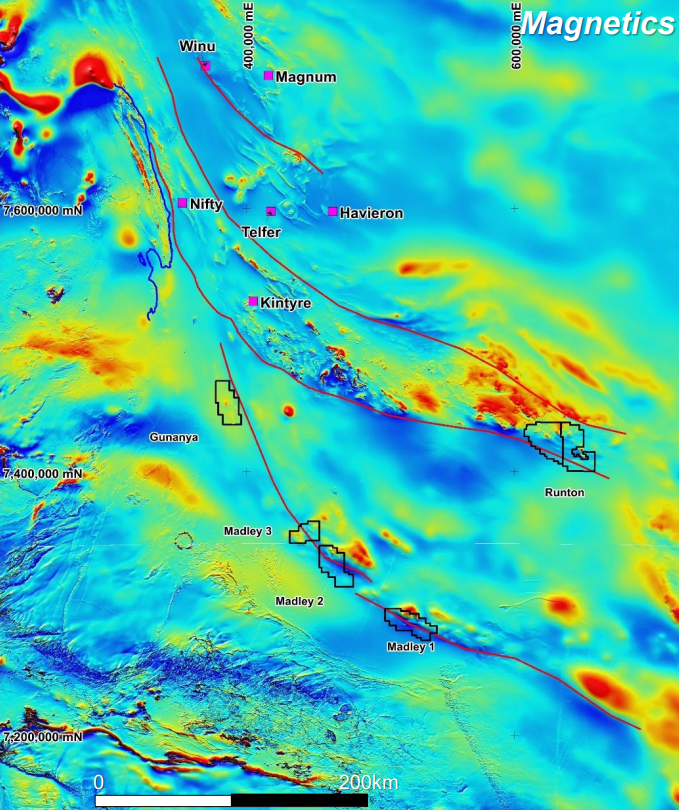 Adding further flavour to the Ausquest story is its Hamilton Copper-Gold Project situated south of large producing mines in Cannington (silver-zinc), but more importantly from a gold/copper perspective, the Ernest Henry mine, a prolific low-cost long-life copper-gold project.

Exploration is targeting Iron Oxide Copper-Gold (IOCG) mineralisation beneath the extensive cover in the region.

Limited historical drilling designed to test magnetic and gravity targets has provided evidence for “near-miss” situations that will be the focus of the company’s exploration program being funded by South32. 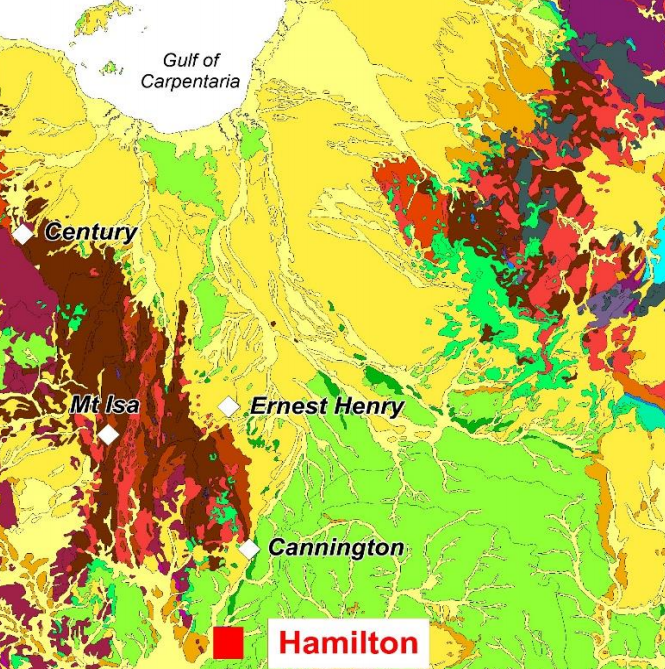 Peru is one of the world’s most prominent destinations for international copper exploration and is considered to be a prime location for world-class exploration opportunities.

Cerro de Fierro is one of the projects, and it is located at the southern end of a recognised Iron-Oxide Copper-Gold (IOCG) metallogenic belt in southern Peru. 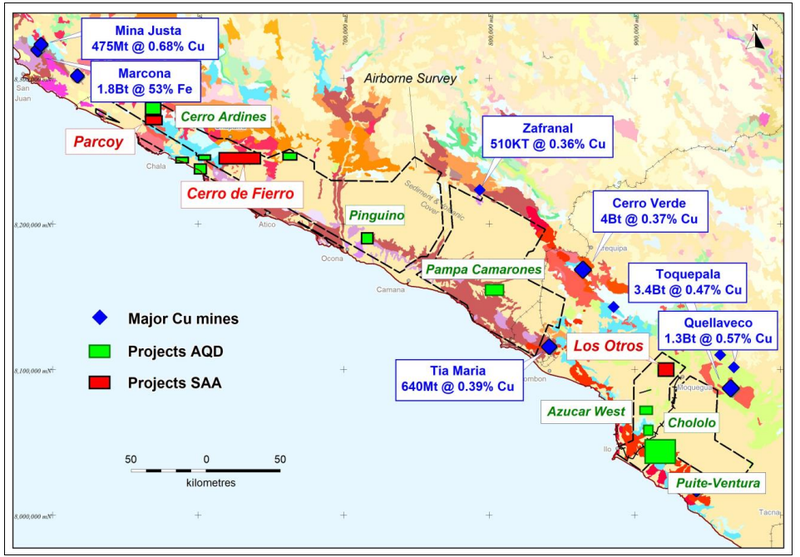 It lies within about 150 kilometres of the Mina Justa deposit (475 million tonnes at 0.68% copper), which is being developed by Peruvian mining company Minsur S.A. It is subject to an agreement with South32, which can earn a 70% interest in the project by spending a total of US$4.0 million.

Ausquest’s other gold/copper interest in the area is the Parcoy Project which is only 100 kilometres from the Mina Justa deposit, and it is also subject to an agreement with South32.

Titan Minerals Limited is another company with gold-copper assets in South America.

The company is shaping up as an impressive news-driven story with the potential for more upside with its shares having increased four-fold since March.

Having raised $14.5 million through a heavily oversubscribed placement and share purchase plan, Titan is well funded to commence exploration activity at its flagship Dynasty Gold Project and the nearby highly prospective Copper Duke Gold-Copper Porphyry Project in Ecuador. 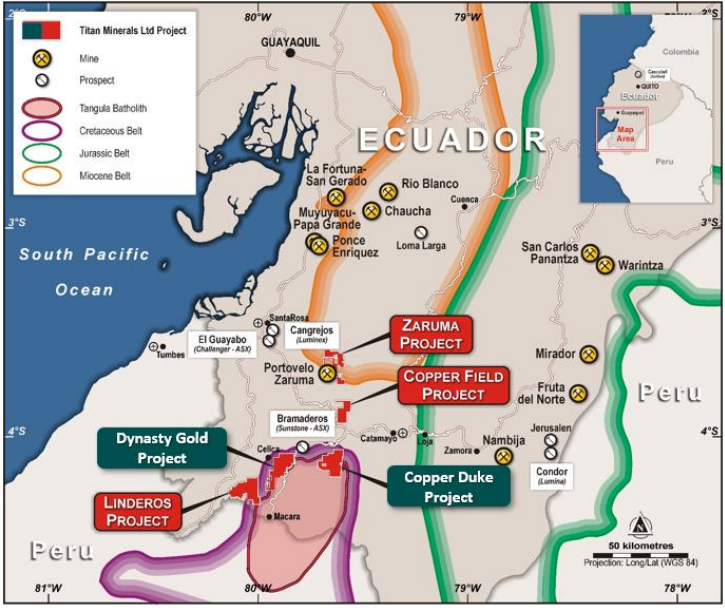 Titan’s strategy is to conduct a drilling campaign across Dynasty, converting the NI 43-101 resource to a formal JORC resource during the December quarter of 2020.

The drill-ready project is comprised of five concessions totalling 139 square kilometres, including three concessions that received Environmental Authorisation in early 2016, leaving them fully permitted for exploration and small-scale mining.

Additionally, Titan is the operator of a gold treatment business in a well-established mining region of Southern Peru.

Copper Duke is an early-stage exploration project located in the Loja province of southern Ecuador, 18 kilometres from the Dynasty Gold Project.

The focus of initial exploration programs is anticipated to generate a ranking of numerous porphyry and epithermal gold style zones of mineralisation based on a scale of system for potential economic viability, leading towards maiden drill testing following the Dynasty program.

Taking a longitudinal leap to the Northern Hemisphere, PolarX is focused on the exploration and development of its Alaska Range Project which contains the Caribou Dome Project and the Stellar Project.

With JORC resources at Caribou Dome and Zackly as indicated in the following map, they form a high-grade copper and copper-gold portfolio with demonstrated endowment and clear upside potential for resource extensions and larger porphyry copper-gold discoveries. 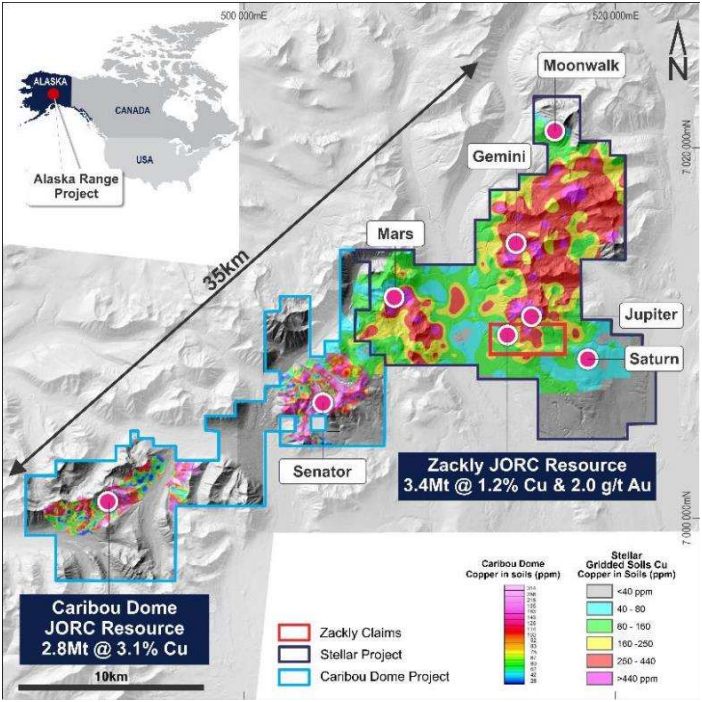 Once again, PolarX could well be a news-driven story given the extensive 2020 drilling program that has just commenced.

It appears that investors may have been getting themselves set ahead of upcoming news with the company’s shares increasing 200% in the last three months.

The Zackly East Skarn occurs just 800 metres from the Zackly Main Skarn deposit where PolarX has outlined an Inferred Resource of 41,000 tonnes of copper, 213,000 ounces of gold and 1.5 million ounces silver from surface.

This resource occurs over a strike length of 1,050 metres.

Geological mapping and trenching will be conducted to evaluate the potential 600 metre strike-length of the Zackly East skarn as the company focuses on increasing the mineral resource inventory.

An initial program of approximately 3000 metres of drilling, comprising 15 to 20 drill holes has been planned to evaluate a 500 to 600 metre strike length of the structure as shown below.

Step out cross-sections will be drilled on 50 metre and 100 metre centres with precise details to be finalised on a hole by hole basis using information gleaned from the previous drill holes.

Look out on Monday for the final three stocks to watch in this series.