There have been some stellar performances by our junior tech stocks over the last three months as they shook themselves off after heavy falls between October and December on the back of the global equities markets meltdown and a plunge in the tech-heavy NASDAQ index.

It was only last week that FinFeed highlighted the strong recent performance of software licencer, rhipe (ASX:RHP) after we featured it in November last year.

rhipe shares hit an all-time high of $1.74 earlier this month, up nearly 30% since our November coverage, and judging from its strong first half performance and management’s upbeat second half guidance there appears to be further upside.

Some other strong performances by tech stocks covered in the last few months included Audinate Group Ltd (ASX:AD8) which was featured in November. Its shares have rallied 45% since then, buoyed by its recent strong interim result.

It was only a month ago that 5G Networks (ASX:5GN) was our stock of the week. It has since has fared well, also benefiting from a strong interim result, and its shares are up 50% in February. The company’s core business is improving connectivity and speed of service for more efficient internet use and cloud applications.

Infomedia (ASX:IFM) was our stock of the week at the start of November and the company delivered its traditionally consistent performance when management announced the interim result yesterday.

Because of its particularly strong recurring income, the group is always one to have on the watchlist when broader market conditions weigh on its share price, and the 30% rally since we last featured the stock came as no surprise.

Always on the lookout for next big thing, Trifecta figured it was time to trawl through the interim results released by tech stocks over the last month and we came up with three that have delivered the goods in the six months to December 31, 2018, but more importantly appear to have the potential to continue their solid momentum into the second half of fiscal 2019.

It was only six months ago that CSG Ltd’s (ASX:CSV) management set the business on a path of transformation after a series of challenges from its print and display business.

While this area of its operations, which includes the sale of print equipment is still functioning, management is focusing on developing its higher margin, recurring income technology as a subscription business.

To simplify CSG’s business model and to return the business to growth, management has realigned the SME (small to medium enterprise) segment to a product-led, go-to-market model with three distinct operating businesses – Technology, Print & Display, and Finance.

The technology business has a clear focus on the SME segment, continuing to cross-sell Technology-as-a-Subscription bundles to the company’s existing customer base and target new SME customers.

The key sales drivers within the print and display business have become the responsibility of the print-only sales force, incentivised to add new customers while maintaining the existing customer base and working with key partners to drive new customer acquisitions.

Within finance, the main focus has been on growing the lease book through new customers and equipment sales.

In addition, a major restructure of the Australian and New Zealand businesses within sales, service and operations, is being undertaken.

CSG has also been simplifying the group’s operational structure and distribution costs, and realising cost synergies through the integration of recent acquisitions.

Management estimates that these restructuring and cost-out initiatives will lead to $7.7 million of cost savings in fiscal 2019, and $10.0 million in 2020.

The group noted in its interim result that it was on track to meet these goals within the stated timeframe.

Importantly, management also reaffirmed full-year EBITDA guidance which is in a range between $17 million and $20 million.

While this news resulted in the company’s shares increasing 16% from 15 cents to 17.5 cents, there could be more upside to come as the 12 month consensus price target is 23 cents.

CSG chief executive, Julie-Ann Kerin summed up the company’s performance for the first half in saying, “The quality of our revenue continues to improve as momentum builds with our Technology and Display offerings.

“In September, we undertook a capital raising of $18 million which was supported by our key shareholders.

“This significantly strengthened our balance sheet, de-risked the business, and has allowed us to embark on a number of strategic initiatives that will support our growth over the medium to long term.”

This is a snapshot of the group’s key strategic initiatives in fiscal 2019 and beyond.

An important development during the half was the establishment of a strategic partnership with Alibaba’s cloud offering.

This has already led to some important wins with major corporations and institutions, and with the potential to gain further traction in the second half, the onboarding of new clients may be a share price catalyst.

Dreamscape Networks Ltd (ASX:DN8) delivered a strong first half profit result last Friday, with positive contributions from Southeast Asia and above market growth in the underlying business in Australia.

Management is looking to establish a model that delivers sustainable profit growth over the long term, and to this end it is building a robust Southeast Asian business by investing in personnel, infrastructure and marketing.

Crazy Domains assumed the industry leading position in 2010 after an aggressive marketing campaign.

Since then, it has grown its market share in Australia from 20% to approximately 30%, but the real kicker in the medium term is likely to be Southeast Asia.

There has been exponential growth in Internet users over the last 10 years with a significant acceleration in numbers between 2016 and 2018. 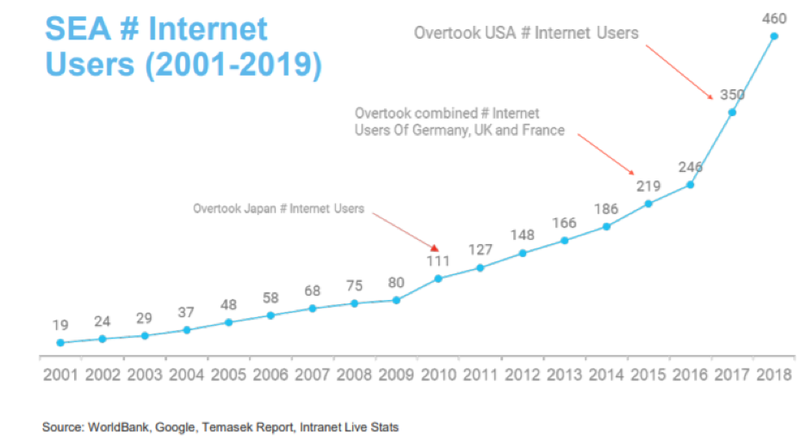 It is also worth noting that an estimated $10 billion will be raised in private tech funding by the end of 2019.

Not surprisingly, the growth of Southeast Asia’s e-commerce market reflects a similar trajectory. 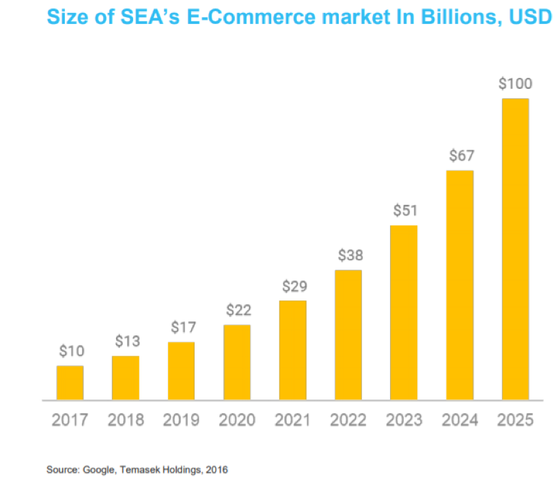 These metrics bode well for Dreamscape which is looking to grow its presence by expanding its established business and making acquisitions in that region.

The company has invested significant capital in preparing for its push into that market, and the returns on investment should be clearly evident in the near to medium-term.

Consequently, while the group delivered a strong fiscal 2018 result which prompted Bell Potter’s tech analyst, Alex Maclean to substantially upgrade earnings forecasts for the coming three years, it would appear that the best is yet to come.

He is forecasting Dreamscape to deliver a net profit of $4.3 million in 2019, increasing to $5.9 million in 2020, representing earnings per share (EPS) of 1.5 cents and reflecting year-on-year EPS growth of 36%.

While Monday’s closing price of 9.3 cents represents a gain of 15% over the last week, it could be argued that the company is undervalued, trading on a fiscal 2020 PE multiple of 6.2.

Maclean has set his price target at 15 cents, implying a fiscal 2020 multiple of 10.

This appears to be more appropriate, and one could argue conservative, for a company that is forecast to generate compound annual earnings per share growth of approximately 30% between 2019 and 2021 inclusive.

RXP cashes in on drive to digital

Underlying EBITDA of $8.4 million was in line with guidance, and well ahead of the previous year’s first half profit of $7.6 million.

However, there was only nominal growth in revenue which only serves to highlight the higher margins being generated from the company’s transformation to a digital service offering.

One of the most impressive takeaways was the operating cash flow which was up 56% to $7.3 million with cash flow conversion representing 95% of EBITDA.

These margins are particularly strong for a sub-$100 million market cap company, and it was this aspect of the group that appealed to Finfeed when we selected it as one of our top 10 stocks in a cooling market as reporting season was about to commence.

At that stage RXP’s share price was 51 cents, but on the back of the result released last week they climbed nearly 10%, increasing from 50 cents to 54.5 cents.

While some profit-taking occurred on Monday, it was under low volumes, particularly compared with the record volumes traded when the result was announced.

One of the appealing aspects of the company from a defensive perspective is its diversification by industry as indicated below.

RXP is less reliant on the banking and telco sectors than has been the case in the past, and taking into account recent client wins this trend looks set to continue. 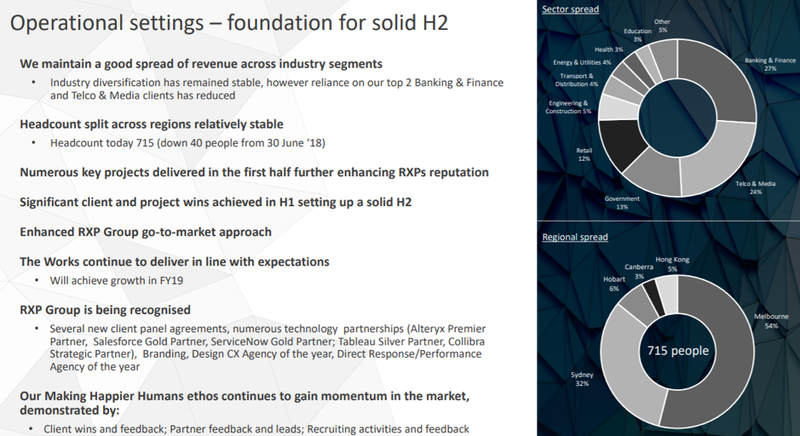 As well as delivering a good result, the company’s strong balance sheet allowed it to reward shareholders with a handsome dividend of 1.75 cents per share.

Should it match this in the second half, which appears to be on the cards given management has indicated the company is poised for a quality second half performance, that would equate to a full year dividend of 3.5 cents, ahead of the pre-result consensus estimate of 3.0 cents per share.

A 3.5 cent dividend implies a yield of 7%, relative to a share price of 50 cents, suggesting that a retracement below that level seems unlikely.

Discussing the company’s strategic focus and its impact on margins, chief executive Ross Fielding said, “RXP’s results were characterised by the continued shift to digital work, with sales in digital transformation related work up 36% over the half, led by our human-centred design, analytics, and platforms work.

“This shift is improving the quality of our revenue, growing gross margins, and offsetting the squeeze we previously felt across some of our traditional consulting work.

“The breadth of our digital services offering, strengthened significantly by The Works acquisition, is allowing us to continue to win new clients and to broaden our services within many of our existing clients.”

Indeed, the company has had some big client wins, including government departments such as Health and Human Services (DHHS), not-for-profit organisations such as the Smith Family, tourism group Sydney Bridge Climb, and major corporates including Subaru, Peugeot and H&R Block.

Fielding reaffirmed previously stated fiscal 2019 guidance of ‘double-digit earnings growth’, another metric that tends to suggest a higher forward PE multiple than that implied by the current share price is warranted. 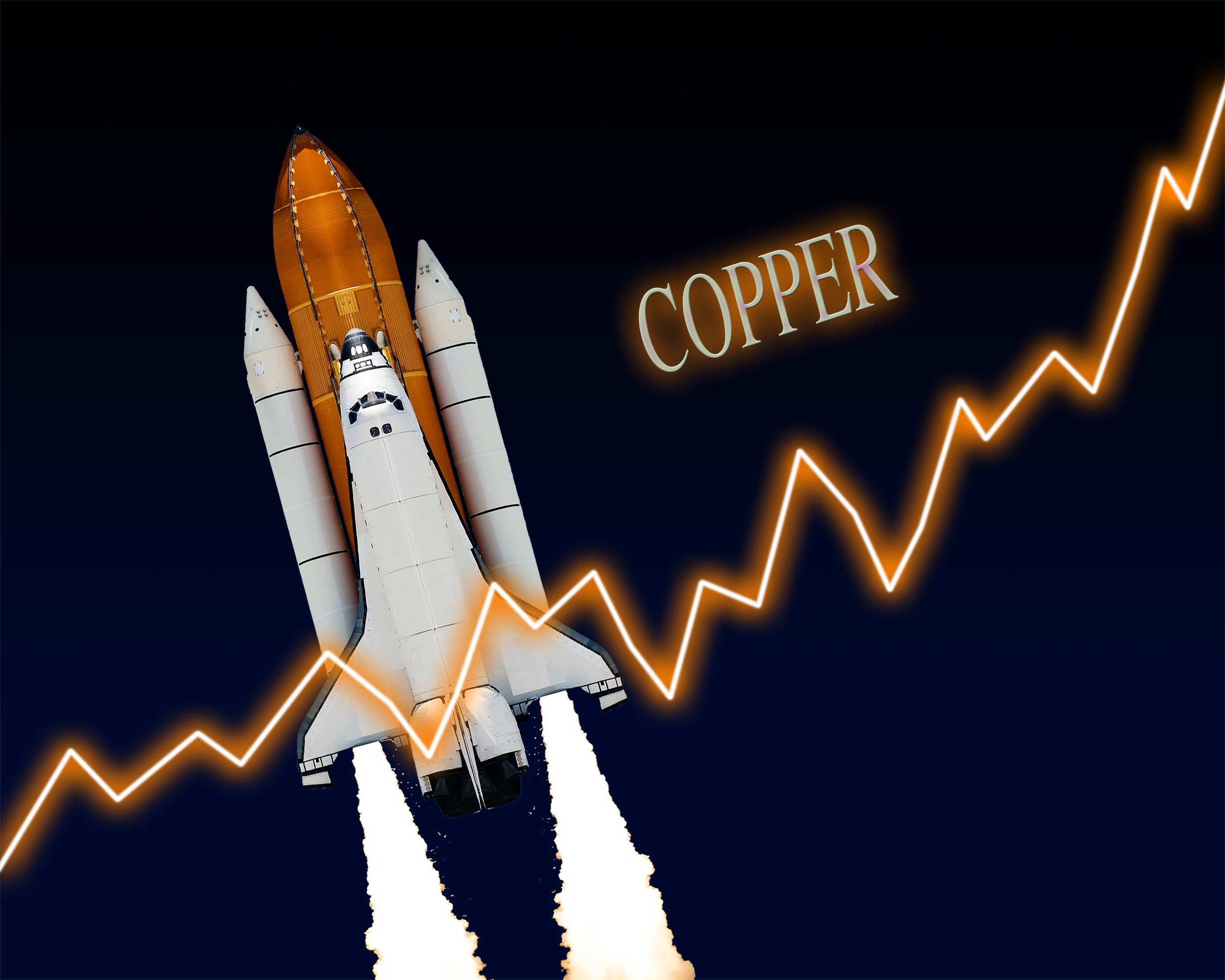 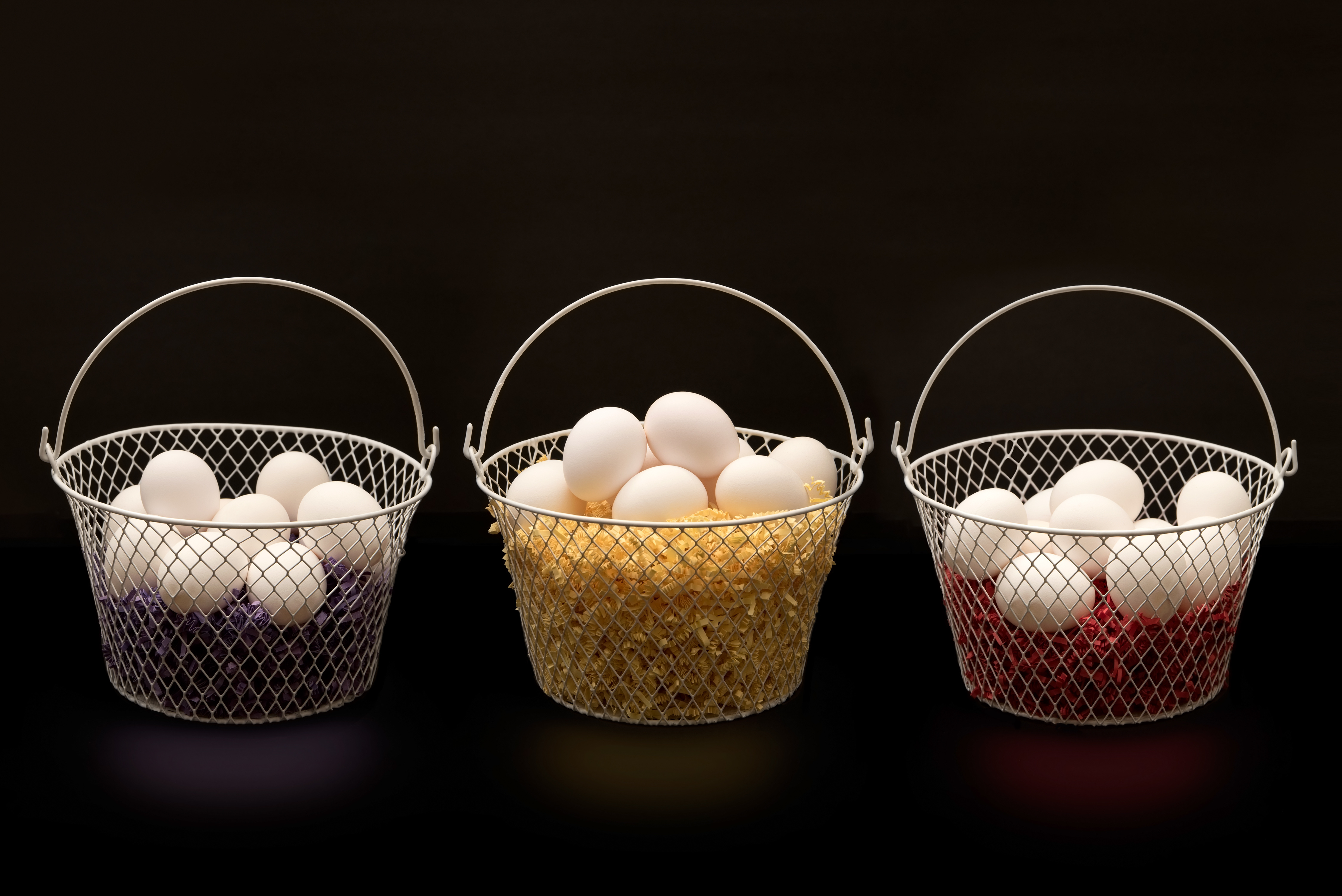 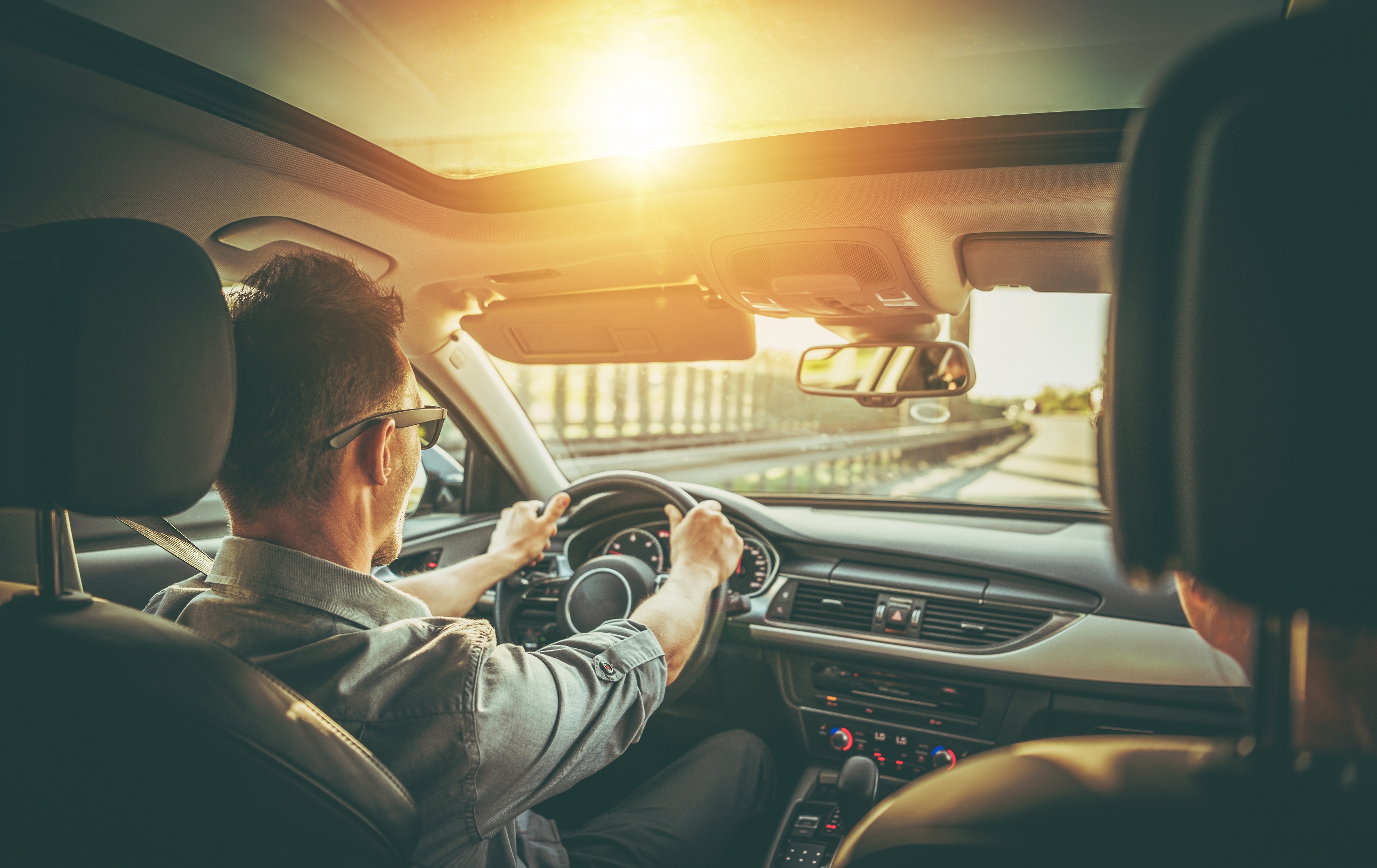 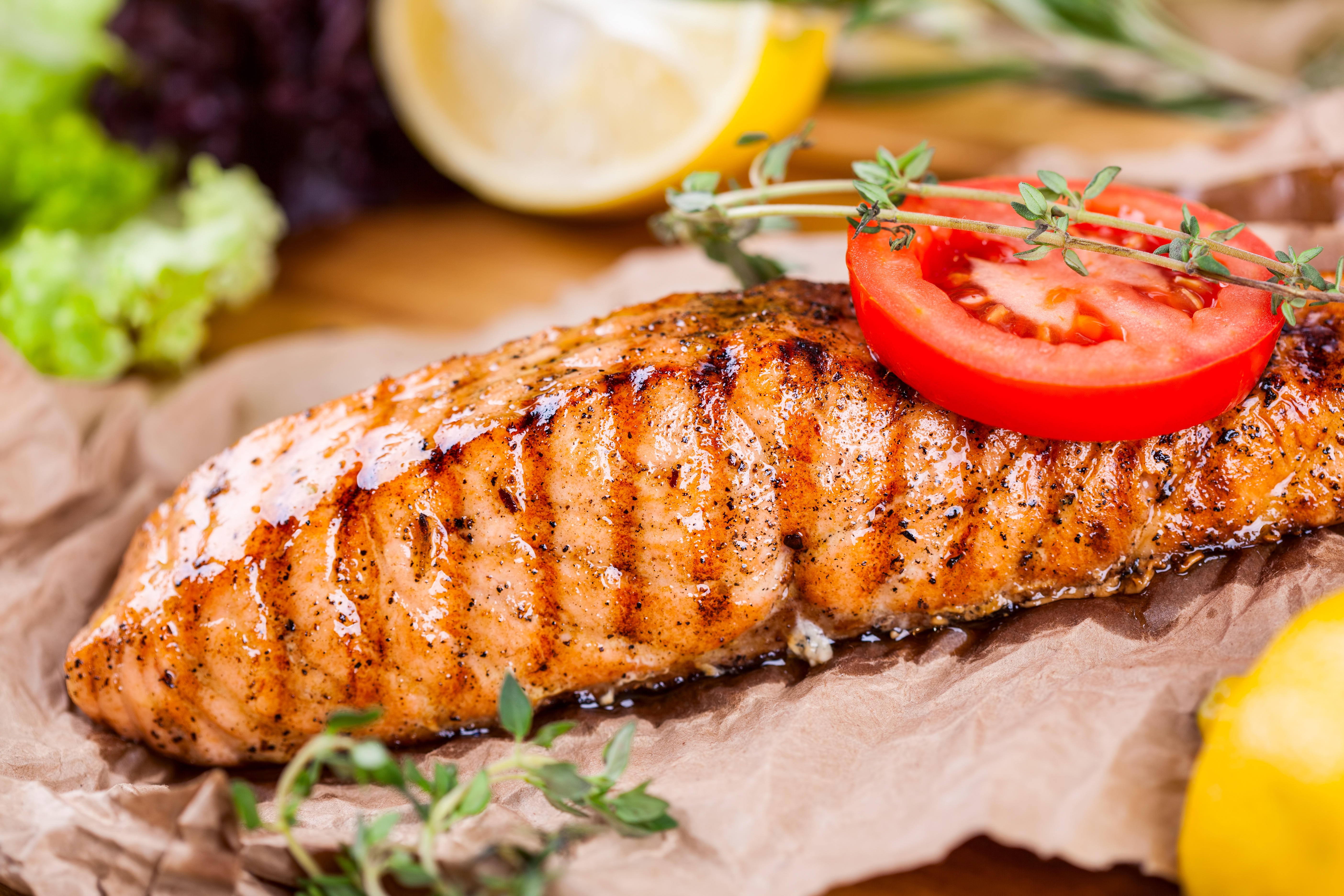 ASX Catch of the Day