Gold continues to glitter in 2019

Given the turbulence that has rocked markets since October, Trifecta decided it was time to highlight companies that have defied the negative conditions — strangely enough, there have been some stunning performances over the last three months.

Even more surprising is the fact that these have come from companies with modest market capitalisations of between approximately $100 million and $200 million.

We are highlighting three gold stocks that appear to have plenty of room for further upside, based on their buoyant operational outlooks and the fact that two are still trading at a discount to consensus forecasts.

These companies have benefited from ideal macroeconomic conditions — specifically, the depreciation of the Australian dollar against the US dollar and strength in the gold price.

Coinciding with this rally was a decline in the Australian dollar relative to the US dollar (green line) from approximately US$0.72 to US$0.70, with a substantial decline occurring in December as it plunged from levels of around US$0.74.

This provided substantial momentum for Australian gold stocks, a number of which we covered last month as this scenario began to unfold.

Background on the 12 stocks we covered can be found in the articles, ‘Australian gold producers on the comeback trail’ and ‘The price is right: A definitive guide to Aussie gold stocks to watch (part 1)’.

One of the most prominent performers was Dacian Gold (ASX:DCN) as its share price increased from approximately $2.00 in mid-December to hit a high of $2.82 on January 4.

In today's article, we run the ruler across three stocks not covered in the course of those articles: Bellevue Gold Ltd (ASX:BGL), Red 5 Ltd (ASX:RED) and Echo Resources Ltd (ASX:EAR).

Between the start of October and January 4, 2019 the share prices of these companies increased by 91%, 50% and 35% respectively.

It is worth noting that these companies are either in the early stages of production or working towards maiden production, suggesting that news flow in 2019 regarding their progress in making the transition from explorers to producers and/or substantially increasing production could provide further share price momentum.

While the last three months featured a stunning share price spike, the foundations for Bellevue’s progress have been consistently enhanced since acquiring the Bellevue Project in fiscal 2017 with the company having significant exploration success.

In October 2016 the company acquired the Bellevue Gold Project, which is approximately 160 kilometres north-west of Laverton in Western Australia.

This is a world-class mineral province with significant new mine infrastructure already in place.

In relatively close proximity are mines operated by other producers and explorers, including big players such as Northern Star (ASX:NST), Saracen Mineral Holdings (ASX:SAR) and Gold Fields Ltd (NYSE:GFI), as well as Red Five and Echo Resources, which we will be examining later.

The Bellevue Project has a rich history, having produced 800,000 ounces of gold at an impressive grade of 15 grams per tonne.

However, production ceased in 1997, and management sees the prospect of returning the mine to substantial production through the implementation of modern exploration techniques.

In August, management declared a Maiden JORC Resource of 1.9 million tonnes at 8.2 grams per tonne gold for 500,000 ounces.

Importantly, 90% of the resource is from the surface down to approximately 450 metres where it is adjacent to existing historical underground workings where there is significant scope for rapid expansion.

Early stage metallurgical test work has returned excellent gold recoveries of nearly 99%, and given that the mining licence is close to the necessary infrastructure, a relatively smooth transition to production is likely.

Step-out and infill drilling in this area defined further high-grade mineralisation, providing management with confidence that the two discoveries in such rapid succession indicate that it has only scratched the surface of a large gold system. 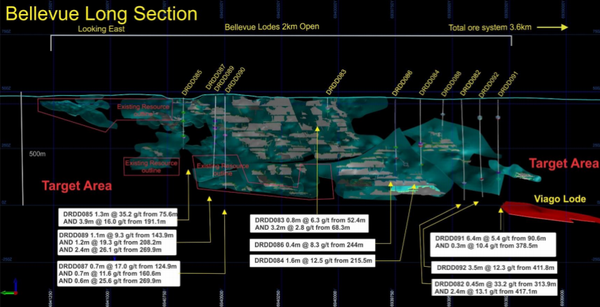 The company delivered a Maiden Inferred Resource Estimate at the Viago Lode of 800,000 tonnes at 22 grams per tonne gold for 550,000 ounces.

Consequently, the Bellevue Project now has a global Inferred Resource Estimate of 2.6 million tonnes at 12.3 grams per tonne gold for just over 1.04 million ounces.

This makes the company one of only a handful of high-grade gold deposits globally, with resources in excess of 1 million ounces.

Following further exploration success at Bellevue and Viago, management has fast-tracked its resource upgrade to early 2019.

This could be a further share price catalyst, particularly if the Australian dollar gold price remains around current levels.

From an exploration perspective, management intends to advance all of its targets simultaneously during the remainder of the year, substantially growing the resource as it provides a platform for production.

In the last 18 months, Red 5 has been extremely active on the exploration front, cementing its position as an Australian gold producer, while at the same time taking some important steps towards unlocking the broader potential of its newly-acquired WA gold assets.

In 2017, the company completed the dual acquisition of the Darlot and King of the Hills gold mines in WA.

In the ensuing months, management moved quickly to integrate the Darlot operation and workforce into the Red 5 group, followed by the commencement of underground mining and ramping up of production at King of the Hills as a source of satellite ore, while embarking on a multi-pronged exploration program at both mines.

This enabled the company to deliver gold production of just over 48,000 ounces from the Darlot mine, a strong performance since its acquisition in October 2017.

Management’s swift progress since the acquisition is summed up below. 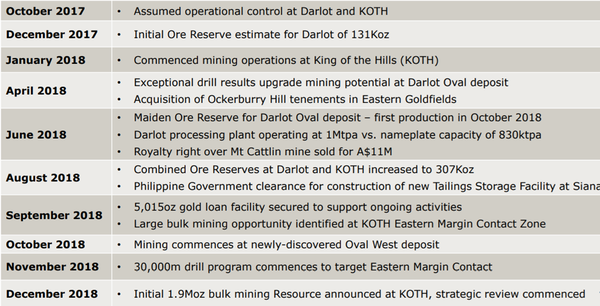 Management’s primary focus during the year has been to maintain the Darlot processing plant at full production capacity with ore from these two sources, while pursuing opportunities to grow mine life and production through resource conversion, new discoveries and potential bolt-on acquisitions.

Red 5 is now well-established as an Australian gold miner, having produced 68,500 ounces in its first four operational quarters, implemented a successful new flexible mining strategy at Darlot, ramped up production at King of the Hills, and delivered an updated JORC Mineral Resource and Ore Reserve across both mines.

Analysts at Hartleys ran the ruler across the stock in December, forecasting fiscal 2019 production of 104,000 ounces which it expects will generate operating cash flow of approximately $23 million.

Importantly, the broker expects AISC to plateau at the bottom end of management’s anticipated fiscal 2019 guidance range from 2020 onwards.

Hartleys is forecasting production to remain above the 100,000 ounce per annum mark at least until 2021, with the potential for exploration success to drive production higher in future years.

Analyst John Macdonald noted that there are very few opportunities to access ore in excess of 2 million ounces at such shallow depths in WA.

His early opinion is that the company’s new objectives at the King of the Hills project "could blossom with step-out exploration, and by late 2019 the company could be trumpeting a sensible mine plan covering 2 million ounces".

On this note, the company has recently made an important breakthrough at King of the Hills with the identification of a new bulk mining opportunity at the Eastern Margin Contact Zone which, subject to the success of ongoing exploration programs, could well end up reshaping Red 5.

A Mineral Resource Estimate was completed in December for the newly identified Eastern Margin Contact at the King of the Hills gold mine, which is adjacent to existing mining areas.

The Indicated and Inferred Resource of 28.7 million tonnes at 2 grams per tonne gold for 1.9 million ounces of contained gold, is based on underground drilling completed by Red 5 to date, together with historical drilling data, covering 2200 metres of the strike of the Eastern Margin Contact to a depth below pit of 130 metres in the south and 300 metres in the north.

The mineralisation remains open both down-dip and along strike in both directions.

Hartleys has a share price target of 10.4 cents on the stock, but this was prior to recent exploration success — a factor that could see the broker revise its numbers.

Drilling at Mt Joel is part of Echo’s strategy to add incremental, near surface ounces to further enhance a planned restart of the Bronzewing processing facility in 2019.

A new resource estimate for Mt Joel is due this quarter, providing potential share price upside.

Another important milestone will be the updated bankable feasibility study (BFS) for the project which is also expected to be finalised this quarter. 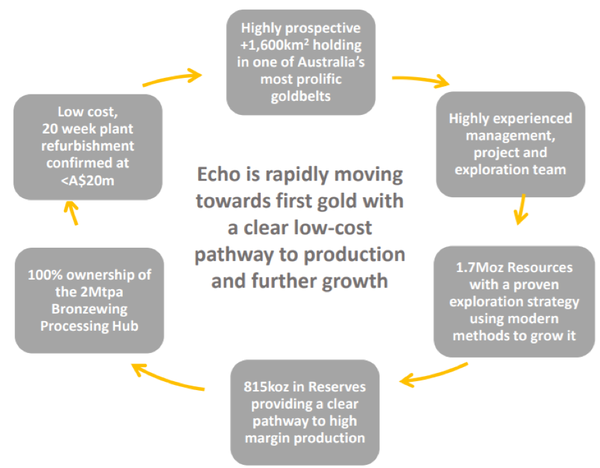 Management expects exploration to continue to strengthen the already robust initial four-year mine plan as the company pushes towards first production this year.

The Yandal Gold Belt is a world class mining and exploration region and the historical work at Mt Joel has only been conducted in the top 100 metres.

With an exploration budget to be funded by production, the company is well-placed to expand the resource through step out or deeper drilling.

Echo controls the central Yandal greenstone belt through 100% ownership of over 1600 square kilometres of highly prospective tenement holdings, as well as the 2 million tonnes per annum Bronzewing processing facility.

The company has embarked on exploration in two districts – Bronzewing to the south and Empire district in the north – both of which are within trucking distance of the processing facility.

The Bronzewing district encompasses the southern part of the Echo tenure and includes the Bronzewing, Orelia and Lotus open pits, the Mt Joel District and numerous highly prospective targets.

With production expected to commence in 2019 and brokers forecasting that the company will be earnings positive in fiscal 2020, the price target appears realistic.