During the period, the company grew revenues by 30%, as well as making strong advances in terms of expanding the business through acquisitions, product development and building on its proven established product areas.

While Vonex’s shares were up about 7.5% in early morning trading, it could be argued that there may be more upside to come, and perhaps a more significant rerating would have occurred if not for depressed market conditions.

As well as achieving strong revenue growth, it is important to note that Vonex is accelerating its recurring revenue streams as the company develops, delivers and licenses its own advanced communications technology, a factor that provides investors with earnings predictability.

The following chart highlights the significant increase in annual recurring revenues during the 12 months to 30 September, 2019. 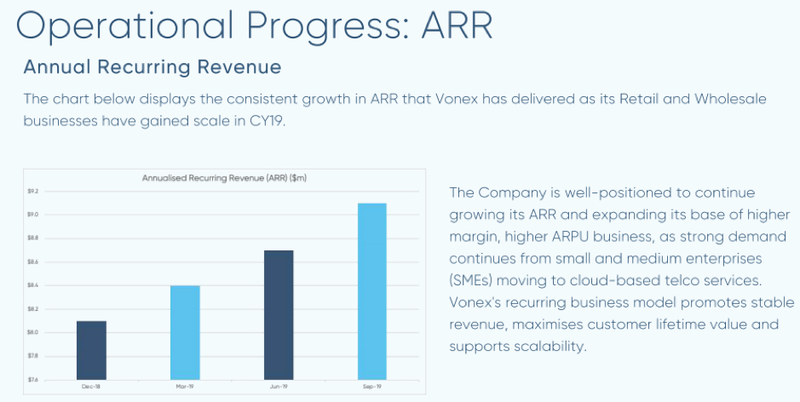 It is worth noting that management confirmed the completion of the acquisition of the 2SG wholesale business on Monday morning, another positive development for the group.

2SG Wholesale is a telecommunications and data wholesaler based in Brisbane, Queensland which provides Australian Managed Service Providers, ISPs and System Integrators with access to the latest in hardware and connectivity solutions from leading brands. 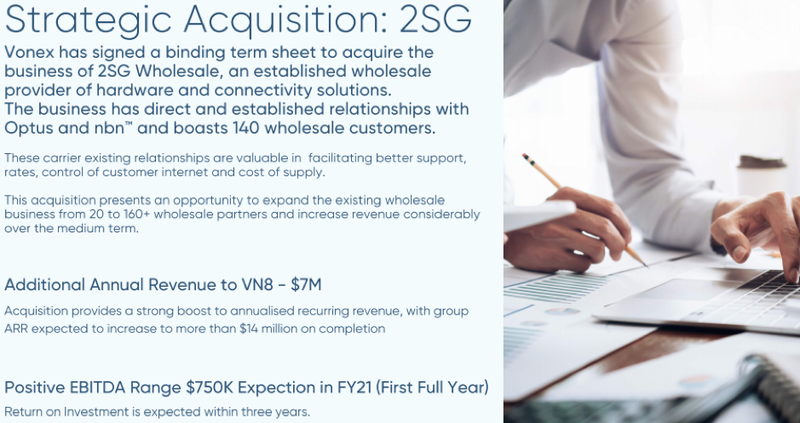 In fiscal 2019, 2SG Wholesale achieved revenue of circa $7 million, with income from mobile broadband a key growth driver.

To highlight the financial significance of the acquisition, Vonex generated revenues of $5.6 million in the December half, equating to annualised revenues of $11.2 million.

Consequently, 2SG provides a revenue boost of some 60% on a base case scenario, but bear in mind the group’s current income generating capacity could be higher.

One needs to also take into account the synergies between the two businesses.

Retail revenues up by more than 15%

Running the ruler across the operational achievements in the December half, Vonex continued to develop and grow its established cloud hosted PBX system and retail customer base with revenues increasing by 15.7%.

The retail division under the Vonex Telecom brand has continued to grow its sales revenues base achieved via the sale of IP hardware, full suite of telecommunication services, including the provision of data, internet, voice (including IP voice) and billing services within Australia.

The Sign On Glass technology, developed internally, has continued to aid the retail divisions new customer sign-up through automation and efficiency.

As well as generating a 15% increase in sales revenues, the retail division has delivered a 14% net increase in customer accounts across the 12-month period ending 31 December 2019.

This compares favourably with the prior year growth 10%, and the continued strong performance can be attributed to greater brand exposure and recognition achieved through a range of marketing and partnership initiatives.

The wholesale division has also continued to grow its sales revenues achieved via the offering of wholesale “white-label” hosted PBX services under license to Internet Service Providers (ISPs), telcos and cloud vendors within Australia and internationally.

The reporting period has seen the wholesale division achieve a 22% increase in its direct sales revenue, along with a 39% increase in the user numbers hosted with Vonex across the 12-month period ending 31 December 2019.

Registered users of these PBX connections are a key indicator of business development progress as Vonex penetrates the multi-billion dollar Australian market for telco services to Small to Medium Enterprises (SMEs).

Achieving this milestone reflects the company’s strong first half of fiscal 2020, signing Total Contract Value (TCV) of new customer sales worth more than $3 million, an increase of 63% compared to the December half sales in fiscal 2019.

TCV of provisioned customers is calculated using the minimum monthly commitment multiplied by the contract length and is typically realised over a period of between two and three years.

The following graph shows the consistent growth achieved by the company over the past two years. 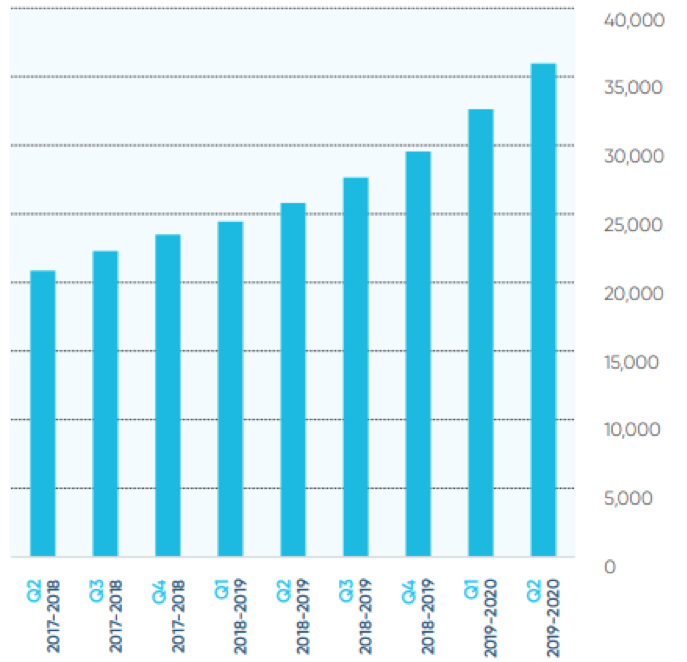 While the rollout of the group’s in-house developed Oper8tor communications platform has taken longer than originally expected, management has adopted the right approach in taking the extra time to make sure it is state-of-the-art and fully compatible.

To this end, the company has completed a rebuild of the Skype connector, while also including SMS capability on a single thread. 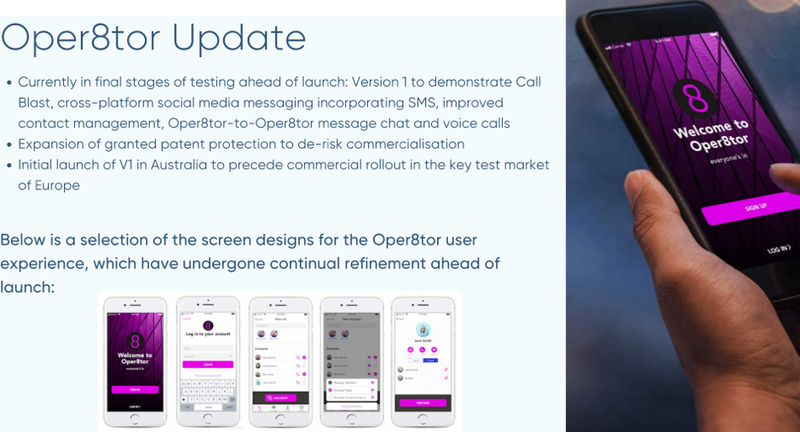 The company expects to move Oper8tor’s development into a phase of polishing and ensuring stability at scale in the current quarter with a closed user group to verify third party testing results.

Once this phase commences, Vonex intends to release Oper8tor Version 1 to a wider community and plans to invite investors to participate in the company’s controlled launch.

On release, Version 1 of Oper8tor will provide a voice and messaging app with connections between two social media messaging platforms, SMS integration and voice call blast functionality to mobile and landline numbers.