The Taro license has a JORC Resource Estimation of 2.27 Mt contained Lithium Carbonate Equivalent (LCE) at a grade of 181 mg/l Li (Indicated and Inferred) out of the total 15.85 Mt LCE at 181 mg/l Li across the Vulcan Project. 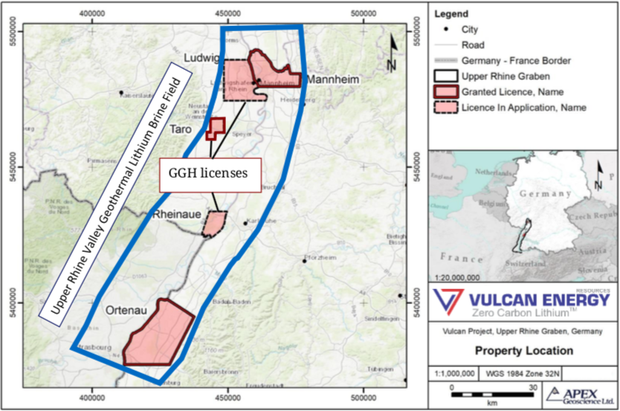 Vulcan has earned a 51% interest in the Taro license and has a right to earn up to 80% with GGH holding the balance.

Additionally, GGH also holds other exploration license applications in the Upper Rhine Valley region which are subject to the Vulcan joint venture.

This acquisition consolidates Vulcan’s major strategic holding in the Upper Rhine Valley, as part of the plan to rapidly advance the Zero Carbon Lithium® project towards production.

Vulcan Managing Director, Dr. Francis Wedin, commented, “By acquiring 100% of GGH, we are consolidating ownership of the Taro and other exploration licences, which simplifies financing and development of our large strategic position in the Upper Rhine Valley.

"This consolidation is an important part of our strategy to become a major supplier of our unique Zero Carbon Lithium® hydroxide to the European battery electric vehicle market."

In November 2020, Vulcan announced a JORC Resource Estimation of 2.27 Mt contained Lithium Carbonate Equivalent (LCE) at a grade of 181 mg/l Li (Indicated and Inferred) in the Taro license.

The Taro Resource was then integrated into Vulcan’s positive Pre- Feasibility Study (PFS) as the first planned phase of project development.

Acquiring 100% of GGH will simplify and consolidate Vulcan’s holding, as part of its strategy to advance its Zero Carbon Lithium® project towards production.

The agreement involves entirely share-based payments, 90% of which are based on project development milestones.