Tempus completes drilling at Elizabeth, assays due in 2021

Tempus Resources Ltd (ASX:TMR) has provided an update on exploration activities at the Elizabeth sector of its Blackdome-Elizabeth Gold Project, located in British Columbia, Canada.

This is an interesting part of the resource as the South-west Vein particularly hosts the majority of the historical NI43-101 Mineral Resource, comprising 522,843 tonnes grading 12.26 g/t gold for 206,139 ounces of contained gold.

The company’s goal was to focus on verifying and expanding the historical high-grade Mineral Resource at the project by drilling extensions to existing mineralisation and other high priority targets within the 350 square kilometre licence area that remains relatively unexplored.

Given the presence of gold and silver mineralisation identified during previous exploration, this was shaping up as a highly anticipated drilling program, particularly at a time when the gold price was close to its record high and the silver price remained buoyant.

It is worth noting that these metals are both trading well above long-term averages, and with gold putting on 1.3% or US$24 per ounce last night to close at US$1856 per ounce companies exposed to the precious metal could finish the year on a strong note.

Diamond drilling at the high-grade Elizabeth sector of the project has now been completed for the 2020 field season.

A total of 12 diamond drill holes as shown below were completed totalling 2,006 metres. 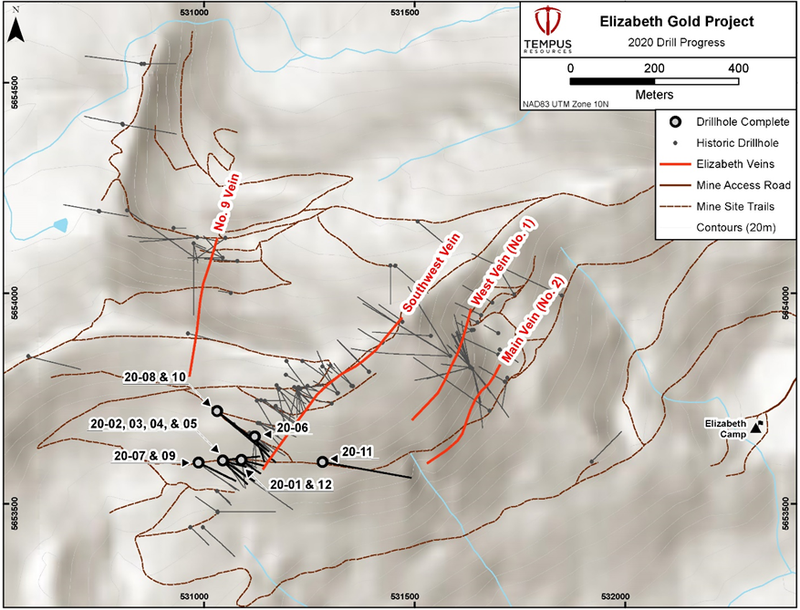 The remainder of the planned 6,000 metres of drilling will commence in the Canadian spring of 2021.

The first four drill holes are now undergoing analysis, and assay results are expected early in 2021.

In the interim, management has provided the following data. 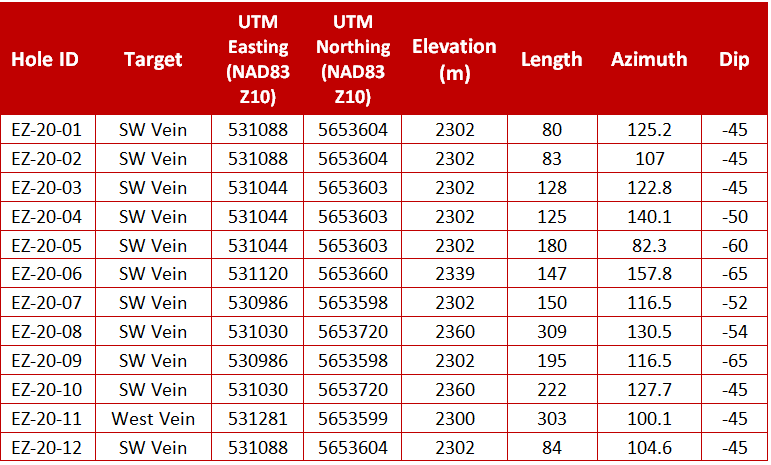 Visually, the drilling has been very encouraging with management noting that infill hole EZ-20-06 intersected the SW Vein from 116.00 metres to 121.5 metres downhole with visible gold observed over approximately two metres of core length within the quartz vein interval.

Tempus has made significant ground since starting the drilling campaign in the second half of 2020.

In tandem with this, the group also raised $4 million and its shares gained considerable momentum as its plans unfolded.

While there has been a recent retracement in the group’s share price, this appears to be mainly related to a slight shift away from gold and a move back into equities markets as COVID concerns dissipated.

However, Tempus remains leveraged to a metal that is still very much in favour, and with a number of catalysts on the horizon in 2021 its current trading range may represent a useful entry point.

Assay results are a potential share price driver in 2021, but it could be the release of an updated resource estimate that should be to hand by March 2021 that triggers the most interest.

This will be a significant milestone for Tempus as it will allow peer comparisons to be made with other companies that have an established JORC 2012 resource.

ASSAYS DUE IN 2021 VISIBLE GOLD GOLD AND SILVER EXPLORATION DRILLING