Shares in PolarX (ASX:PXX) traded as high as 5.6 cents on Tuesday morning, representing an increase of more than 70% on the previous day’s close.

This was triggered by highly promising sampling returns from the Humboldt Range Project in Nevada where PolarX paid US$35,000 to secure an option over the project.

The company can exercise the option by paying a further US$175,000 (in stages) and issuing 5 million shares to the vendor and paying the owner a 2.5% NSR (smelter royalty) upon production with US$10,000 monthly advance royalty payments from September 2022.

Legal due diligence is on track for completion in the March quarter with fieldwork scheduled to start in April.

What has excited the market is the presence of extremely high grades of gold and silver at several sites within the project area.

Sampling was undertaken by PolarX as part of its current option to acquire a mining lease agreement over the project, and the receipt of highly promising assay results in due diligence sampling suggests the company has struck a winner.

Sampling by PolarX at several sites confirmed the presence of high grades of gold and silver in outcropping veins and historic mine dumps, with peak values of up to 37.7 g/t gold and 18 g/t silver at Black Canyon and up to 31.2 g/t gold and up to 1,590 g/t silver at Fourth of July.

As indicated below, these samples have been taken from areas in relatively close proximity to the 5 million ounce Florida Canyon mine. 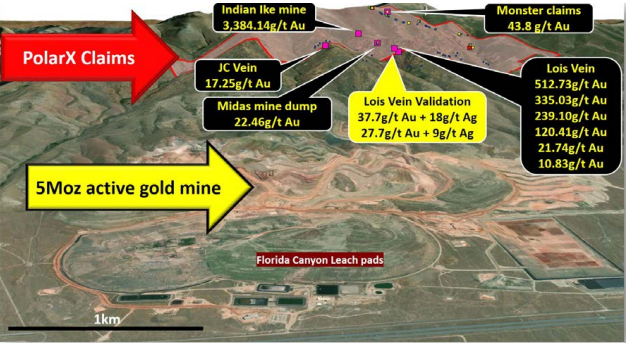 PolarX will benefit from ready access to interstate highways that lie just 15 kilometres to the west.

Immediate evaluation of length and continuity of veins

Widespread narrow vein mineralisation with visible gold occurs in the claims and was historically mined via numerous adits and underground workings between 1865 and 1927.

Mineralisation occurs in high-grade epithermal quartz veins of varying thickness (reported from 1 centimetre to 3 metres), either as isolated veins or as zones of sheeted/anastomosing veins within zones of intensely altered and mineralised host rocks.

PolarX intends to immediately commence an evaluation of the length and continuity of the vein sets to determine whether high-grade mineable widths and tonnages are present, along with an evaluation of whether the altered rock between the veins contains economically viable grades of gold and silver amenable to bulk mining.

From a broader perspective, the Humboldt Range Project will complement PolarX’s Alaska Range Project, providing a longer field season (April-December) for another high-quality asset in a Tier-1 jurisdiction which can be serviced by the company’s existing consultants.

It is worth noting that PolarX has commenced staking approximately 100 additional lode claims in the Fourth of July area to consolidate the landholdings, and particularly on the back of today’s news, the successful expansion of the group’s tenement area could well be a share price catalyst.

The following map clearly shows the heavily compressed clusters of high-grade gold and silver, suggesting that similar grades of mineralisation could well exist in areas adjacent to the current claims.

Due diligence assays are depicted in black text on a yellow background. 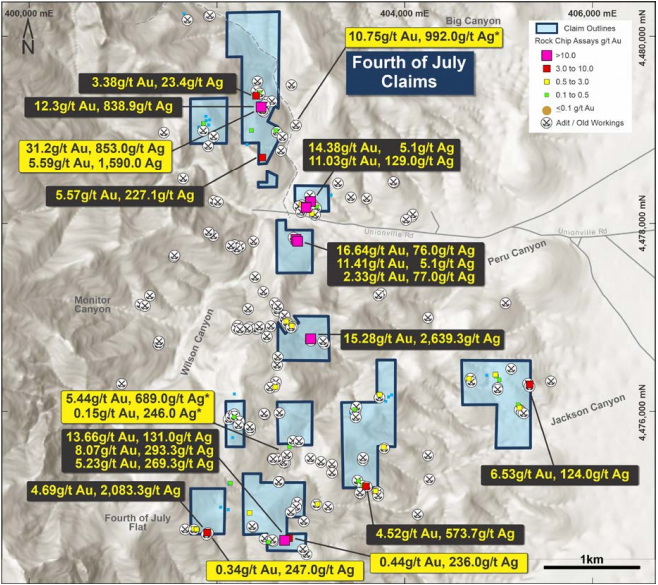