The company has made the decision to extend the first hole of the Chuscal gold target drilling program beyond the planned 350m final depth, given it remains in a breccia system that has strong mineralisation potential.

Metminco’s managing director, Mr Jason Stirbinskis explained, “This is the first drill hole into the Chuscal project, and we have elected to continue to drill hole CHDDH001 past the original planned depth as we remain in this encouraging breccia sequence. We will keep the market informed about the program as it evolves.”

“The target was the northern contact of the Guyacanes diorite, veining associated with the Guyacanes tunnel and investigation of a magnetic low in the north. At the contact zone between the diorite and monzonite country rock we have been overwhelmed by the extent of hydrothermal alteration, particularly along the NE contact where we have intersected over 168m of breccias containing sulphides and overprinted by ISS veinlets.

The hydrothermal breccia zone shows a close correlation with the magnetic low and we are encouraged that the breccia zone corresponds at surface to an 800ppb gold in soil anomaly and that the mineralisation extends into the monzonite country rock. We await initial assay results from the first hole to start arriving in three or four weeks.”

The first samples were despatched to ALS laboratory in Medellin for assay this week. A second batch will be despatched next week on completion of the geologic logging of the core. A turnaround of three weeks is expected for the assay data. 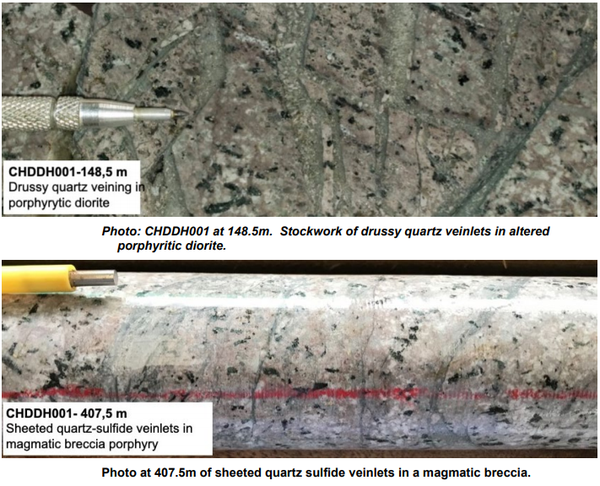 The exploration update was followed by the company announcing its intention to change its name to “Los Cerros Limited”, marking the reinvigoration of the company after the recent merger.

The directors believe Los Cerros better reflects and acknowledges the company’s focus on activities in the Andes mountains of Colombia.

Los Cerros is Spanish for “The Hills”, and also has local relevance as Villa De Los Cerros is an alternate name for the town of Quinchia from which the company operates. The change of name will be voted on by shareholders at the 28 November 2019 General Meeting.