The first assay results confirmed the encouraging results of previous drill holes TS-DH02 and TS-DH07 located either side of the recently completed hole, further demonstrating both the deeper gold-copper porphyry and the near surface high grade epithermal gold potential.

Importantly, these results build on 384 metres at just over 1 g/t gold from 16 metres and 253 metres at a similar grade from 2.9 metres.

We will discuss these results in more detail, particularly given they compare very favourably with recent drill results from other South American players that have experienced substantial share price upside in recent weeks.

Firstly though, it is important to grasp the asset value that investors are receiving when they buy into the $24 million market cap group.

Los Cerros is a gold/copper explorer with a dominant position within the Andes and Quinchia regions of the Mid-Cauca Gold belt of Colombia.

Within three kilometres of Miraflores is the Tesorito near surface porphyry where the company is currently drilling.

Also in close proximity is the Chuscal target (see below) where a maiden drilling program was completed in January 2020 and drilling is scheduled to recommence in October 2020. 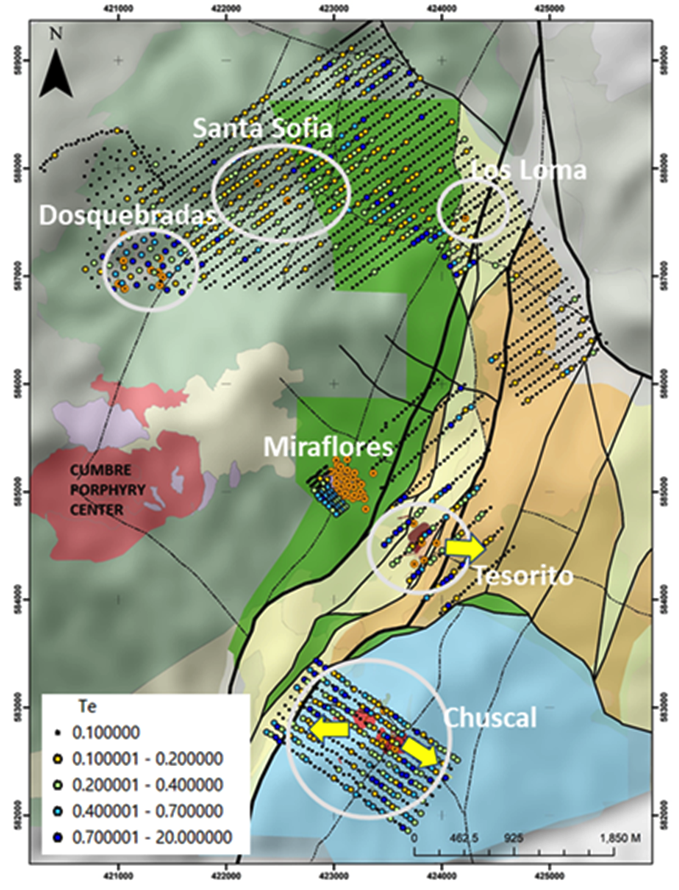 The multi-million ounce Mid-Cauca Gold Belt is home to large producing mines, recent high profile discoveries and the subject of extensive investment by blue-chip players, one of those being AngloGold Ashanti, a shareholder in Los Cerros.

AngloGold is the third largest gold mining company in the world based on production.

This is an outstanding endorsement of the company’s prospects given Anglo’s comprehensive understanding of the region. 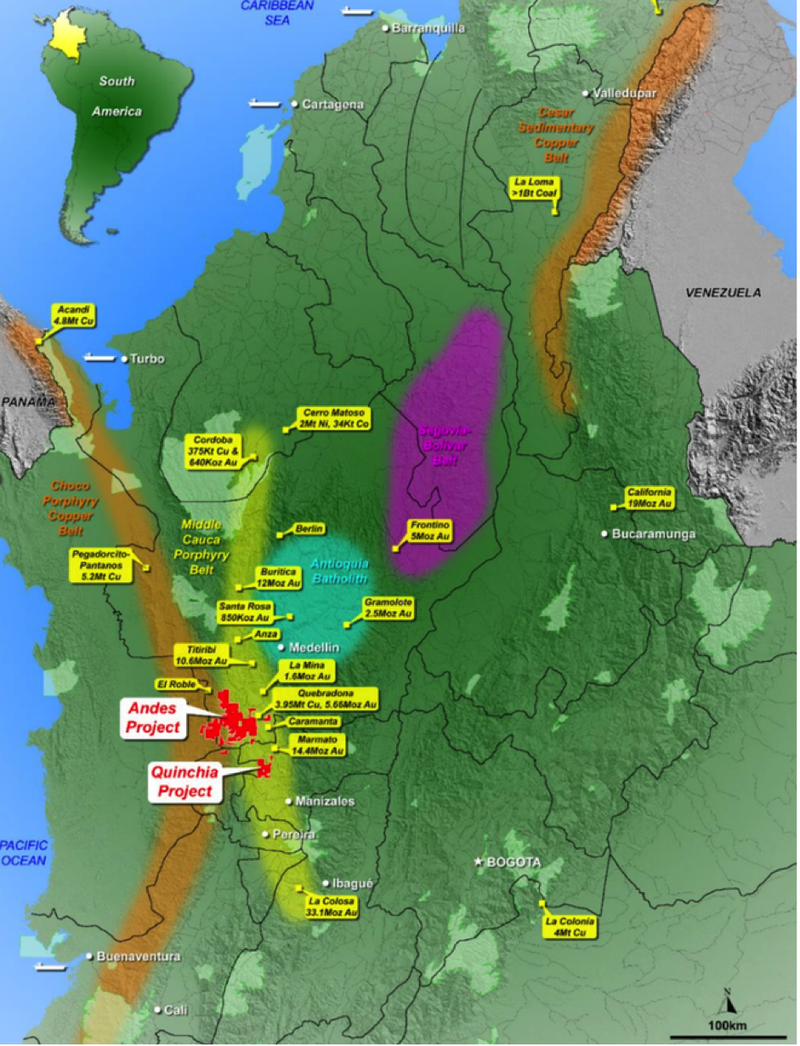 As indicated by AngloGold as at 31 December, 2019, the gold component of the company’s reserve at the Nuevo Chaquiro copper-gold project was based on a gold grade of 0.71 g/t, highlighting the potential commercial viability of the grades being delineated by Los Cerros.

The following table from AngloGold’s annual report indicates that even at 0.71 g/t gold, the contained gold is 2.5 million ounces, highlighting the benefits of developing large-scale projects that are characteristic of the region.

Tesorito is also shaping up as a gold-copper play as a significant new development is the presence of primary bornite, banded veining and anomalous copper, increasing the potential for copper mineralisation to develop at depth.

There is already emerging evidence of scale and continuity of both near surface epithermal and deeper high grade porphyry style mineralisation, and current hole TS-DH09 is exploring an untested northern anomaly currently at a depth of 329 metres, the outcome of which is much anticipated.

While the close proximity of Nuevo Chaquiro is important in its own right, it is also worth noting that two of Los Cerros’ senior geologists have worked for AngloGold on that project.

These geologists bring important expertise to Los Cerros in terms of developing an astute exploration strategy.

Management buoyed by indication of copper mineralisation at depth

Looking more closely at the drilling results, TS-DH08 entered mineralisation immediately at surface with 18 metres at 2.0 g/t including an interval of 6 metres at 4.1 g/t correlating with a mapped epithermal vein.

Porphyry mineralisation with epithermal vein overprinting continued for 230 metres down hole, and it was observed on the first 10 metres of a 39 metre thick fault zone (220-259m) that is followed by an intermineral porphyry diorite from 259 to 277 metres, before altered country rock was encountered until the end of hole at 325 metres. 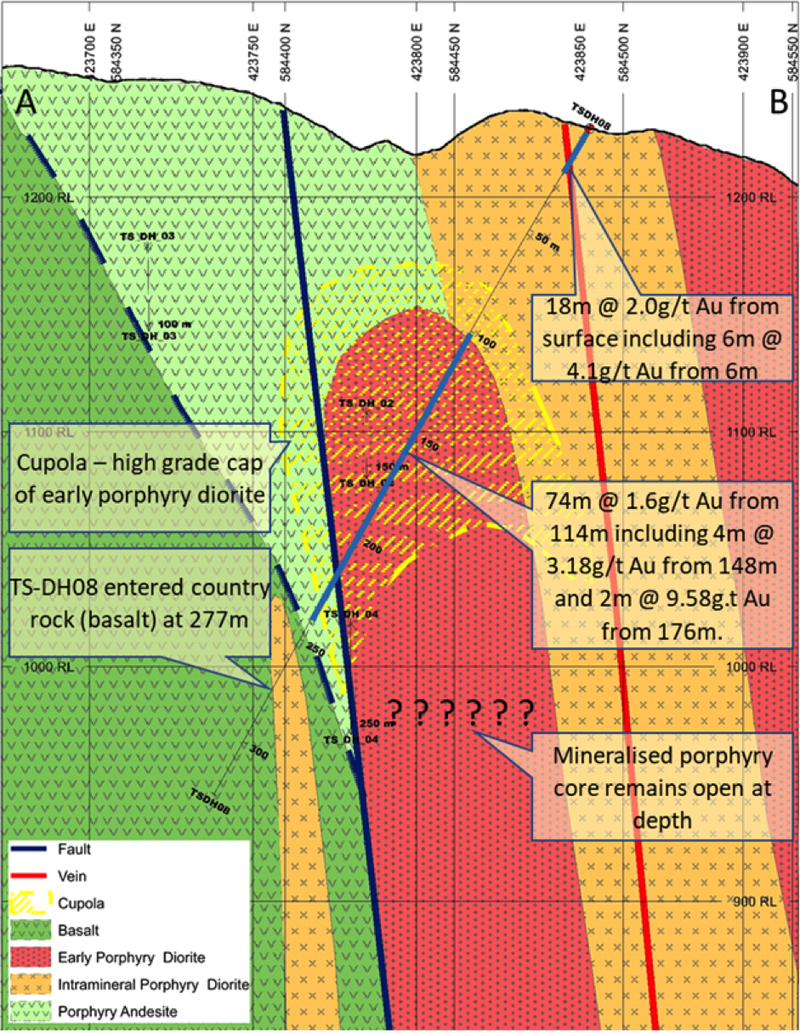 From a geological perspective, it is of particular note that the drill hole is interpreted to have entered the cupola (porphyry cap as indicated above) of the potassic core at 110 metres, and the presence of primary bornite, a copper mineral classically associated with porphyry gold-copper deposits suggests the likelihood of strong assay results in this zone.

The potassic altered core is interpreted to be the cause of the air magnetic anomaly.

Down hole thicknesses exceeding 230 metres of gold mineralisation of 1 g/t or above, essentially from surface, have now been identified in three drill holes over an area of 300 metres x 250 metres, and the mineralisation remains open to the north-northeast and east direction as well as showing additional promise to host copper with gold in depth extensions.

Commenting on these promising results, Los Cerros’ managing director Jason Stirbinskis said, “This is a highly encouraging start to the drill campaign as not only has it provided a sense of near-surface porphyry mineralised volume given similar results of nearby holes, it has hinted that there is further potential at depth.

‘’Primary bornite is a copper rich mineral species, its presence, based on visual logs, correlates to elevated copper in assays and has raised the possibility of more copper occurrences as we chase depth extensions in subsequent drilling.

‘’The 18 metre intersection grading 2.0 g/t gold from surface including 6 metres at 4.1g/t gold also provides encouragement to further pursue the east-west trending epithermal veins for high grade gold resources to supplement existing resources and reserves at the nearby Miraflores deposit.

‘’Our Senior Geologists, both of whom have worked at the multi-million ounce Nuevo Chaquiro deposit, 51 kilometres to our north, and La Colosa deposit, 104 kilometres south-east, have noted textural and mineralogical similarities to that deposit, especially its porphyry core which also carries banded veins, UST textures and primary bornite.”

These characteristics can be seen in the following drill core samples. 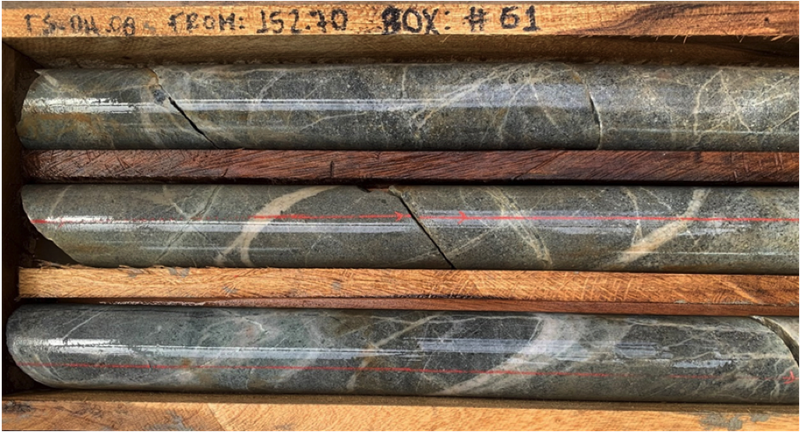 In his comments on the recent results Stribinskis referred to the possibility of adding high-grade gold resources to supplement the existing resource at Miraflores.

This could become an integral part of the company’s strategy, particularly with the gold price hovering in the vicinity of US$2000 per ounce.

Other options were pursued ahead of Miraflores when the gold price was approximately US$1300 per ounce, but another $700 per ounce could make the mine highly economical, even more so if the resource was expanded and complemented by the addition of higher grade ore.

Tesoro provides a guide as to what may lie ahead

It is often difficult to correlate exploration results with the likely share price upside, but with Los Cerros there happens to be some very relevant results that have just been released by another player on the west coast of South America.

On September 4, Tesoro Resources released assay results from two of its holes at the El Zorro project in Chile.

Similar to Los Cerros, Tesoro has been successfully targeting wide zones of gold mineralisation, and the recent results in management’s words ‘’confirmed the large scale potential at El Zorro.’’

The former was the widest intercept to date, prompting management to label the results as ‘’exceptional.’’

The company’s shares responded accordingly, and they are now up 30% since the drilling results were announced.

If this is a yardstick, Los Cerros could be in for a significant rerating given it is building on a much more substantial platform of large intercepts and the superior widths and grades intersected in TS-DH08.

It is also worth bearing in mind that Tesoro has a market capitalisation of approximately $90 million, nearly four times that of Los Cerros.