It seems that with every drill hole Los Cerros (ASX:LCL) targets, it is one step closer to evolving its 100% owned Quinchia Gold Project in Colombia into a multi-million ounce project.

Within 3km of Miraflores is the Tesorito near surface porphyry and the Chuscal porphyry target.

These two targets are the focus of LCL’s announcement today.

LCL has delivered ongoing exploration success at Tesorito and this shows no signs of slowing down.

LCL has today announced results from step out drilling at Tesorito South, where the dimensions of the Tesorito South porphyry continues to grow.

All recent Tesorito results have remained within mineralisation, this means the system remains open in directions tested. This also bodes well for the scale of the project as it continues to expand.

Following are the latest drilling results of intercepted zones of higher-grade gold within a broad zone of near surface mineralisation.

“The near surface higher grade gold intercepts of holes 18 and 19 suggest the higher grade core of the porphyry system reaches surface to the east of this pad, an area we are currently drilling,” Los Cerros Managing Director, Jason Stirbinskis said.

“It is becoming more apparent, with every drill hole that grows the potential scale of Tesorito, that our Quinchia Gold Project has great potential to evolve into a multi-million ounce gold project, like many of its neighbours.

“We already have over 1.3Moz of JORC Resources defined, before we consider what we may be able to delineate in the Tesorito South area and at other earlier stage prospects.”

Tesorito South drill holes mentioned today are part of a larger campaign focused on expanding the lateral dimensions of modelled gold envelopes to the south and north, including higher grade sub-zones that show remarkable consistency and persistence across much of the drilling campaign.

Of most note in TS-DH18 and TS-DH19 is the at-surface higher grade 1.5-2g/t gold zone interpreted to be the same higher grade zone encountered to the west at 72m downhole in TS-DH17 (52.3m @ 2.1g/t Au from 72m) which is consistent with the modelled westerly plunge of the porphyry system. 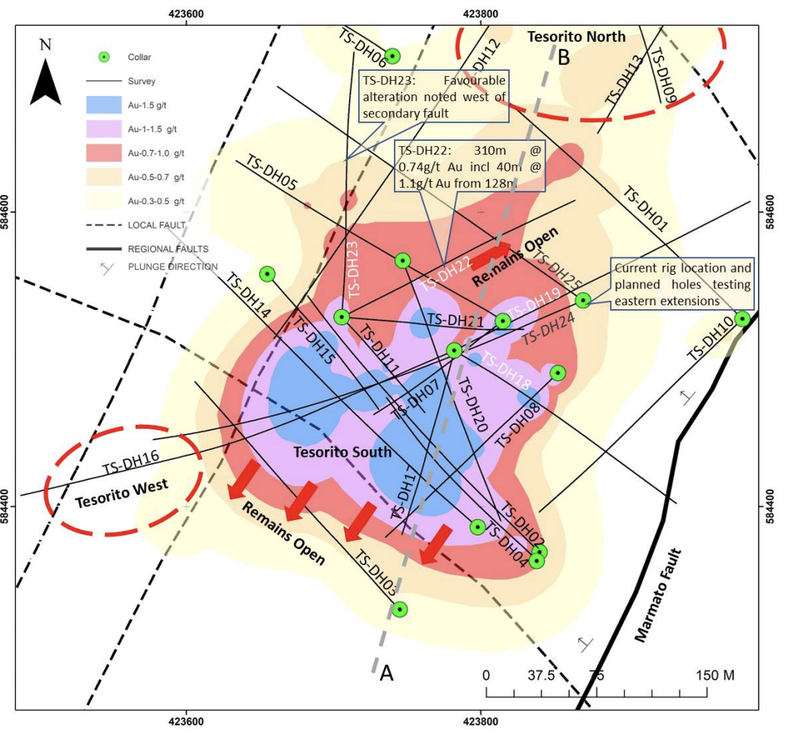 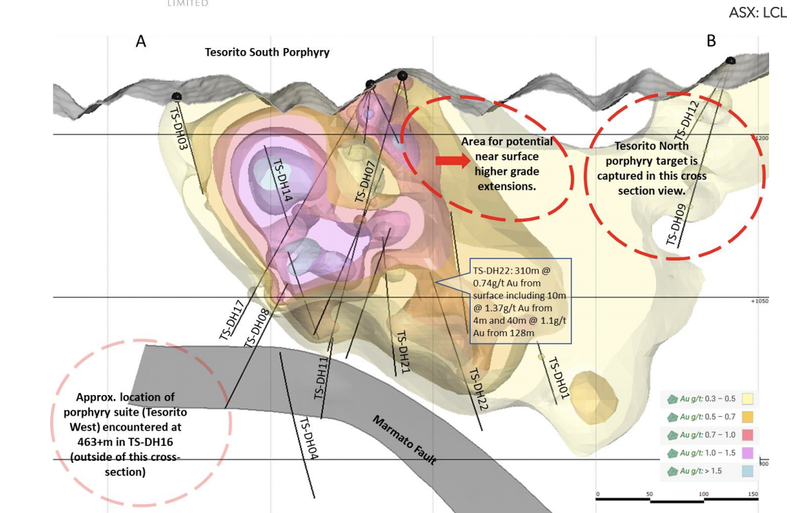 If further shallow gold of ~1g/t Au can be delineated in this zone, it has potential to have substantial positive outcomes for future mining economics of the Quinchia Gold Project.

“The Company has previously announced plans for deep penetrating IP geophysics which will begin shortly. It is expected this program will provide critical additional information for drilling both the western area of the Tesorito South porphyry (Tesorito West) and Tesorito North,” Stirbinskis said.

The previously reported visual logging of CHDDH12 intersected a suite of diorite, porphyritic diorite plus a 164m wide zone of magmatic breccia interpreted to represent elements of an underlying causative porphyry partly responsible for the significant extent of the Chuscal gold in soil anomaly.

Hole CHDDH13 was sited to test ~200m below the CHDDH12 zone of interest.

Whilst most of the core of both holes delivered extensive, but marginally elevated gold values, a 32m wide zone capturing a central diorite surrounded by magmatic breccia produced the following intercept in CHDDH13: 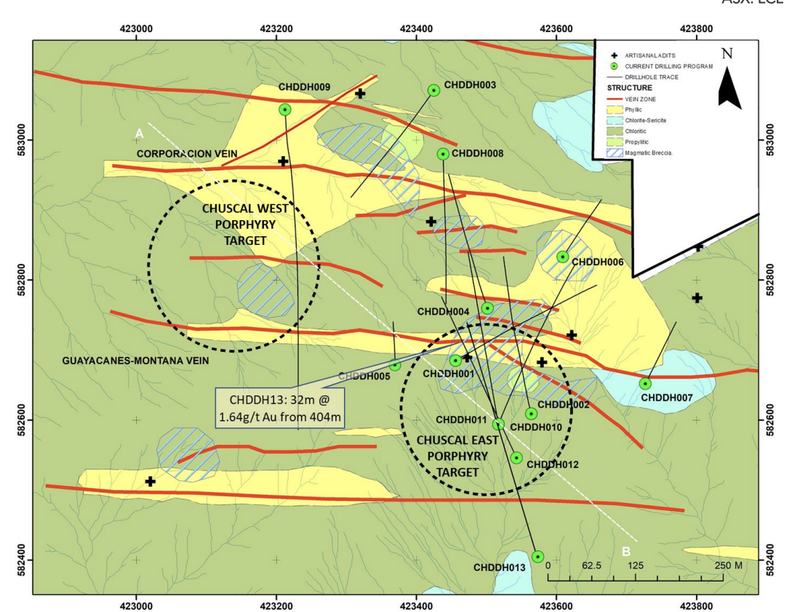 “We remain confident that we are edging closer to the core of an underlying causative porphyry at Chuscal East and we are yet to test the Chuscal West porphyry target,” Stirbinskis commented:

“The Chuscal rig is drilling at the Ceibal porphyry target currently and it is intended to return to drilling Chuscal after the completion of pending regional geophysics which should assist in targeting.”