Latin Resources Limited (ASX:LRS) has provided an update on its various projects and ongoing exploration activities in the highly prospective Lachlan Fold Belt of NSW, including details regarding tenement acquisitions.

This is real gold-copper territory that includes the world-class Cadia Mine operated by Newcrest Mining (ASX:NCM) and the McPhillamys Gold Project being developed by Regis Resources (ASX:RRL).

The three new tenements within the Lachlan Transverse Zone in the East Lachlan Fold Belt are now part of the group’s promising portfolio following the successful grant of ELs 9148 Manildra and 9172 Burdett, and the application of ELA 6292 Boree Creek. 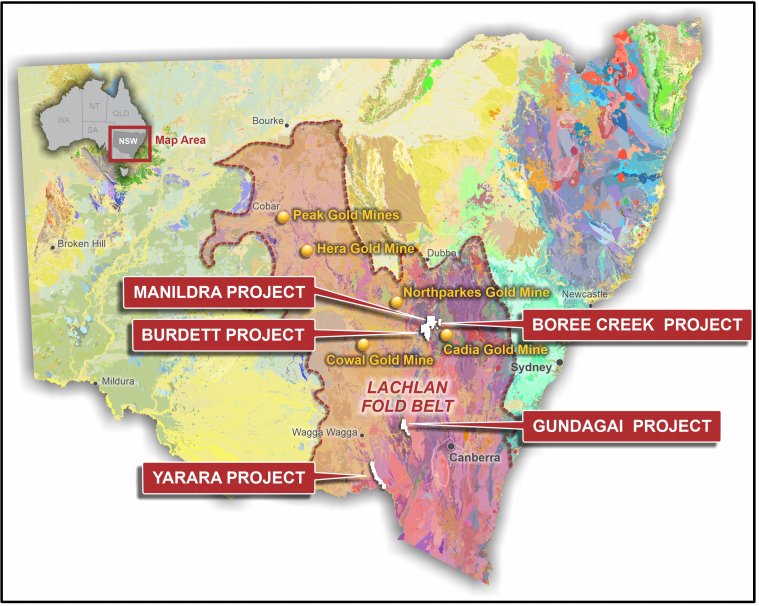 The new tenement application at Boree Creek is less than 20 kilometres to the north-west of Newcrest’s Cadia copper-gold mine, highlighting its nearology appeal.

The NSW Geological Survey has defined a series of north-south trending corridors that are highly prospective for orogenic gold mineralisation associated with regional structures like the Manildra Fault zone.

As shown below, the Manildra, Burdett and Boree Creek project areas are crossed by a number of these corridors, highlighting the prospectivity of these three new tenements. 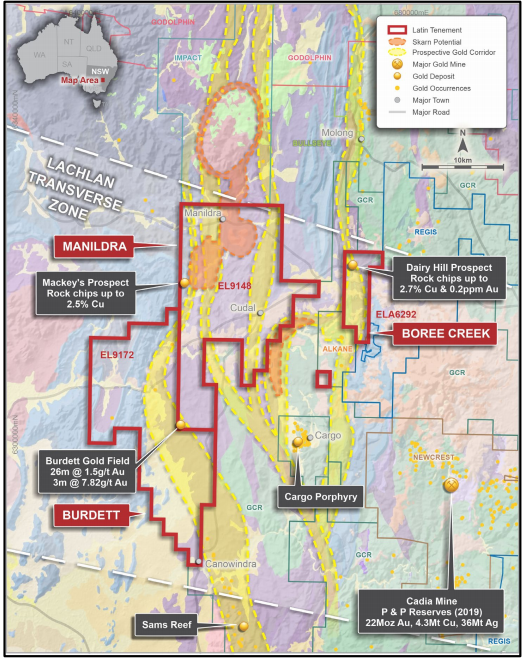 As indicated on the first map, the Gundagai Nickel-Copper-PGE Project lies almost directly to the south of Boree Creek.

Following the grant of the two new tenements, and securing land access and other statutory approvals, Latin proposes to complete regional and project scale first pass targeting exploration that may include geophysical surveys and low-impact geochemical sampling, followed by RC drilling of any defined targets.

Elsewhere, early-stage exploration has started at the group’s Yarara Gold Project south-east of the Gundagai Project.

On-ground reconnaissance mapping and rock chip sampling have been undertaken along the 1200 metre strike extent of the historic gold workings.

Assay results from the 57 rock chip samples collected at the Peep O’Day prospect are pending, but assays up to 5.4 g/t gold have been returned from historic rock chip samples taken along the length of the workings.