Results from the RC drilling will assist in refining the overall exploration model and facilitate the interpretation of several anomalous gold structures. 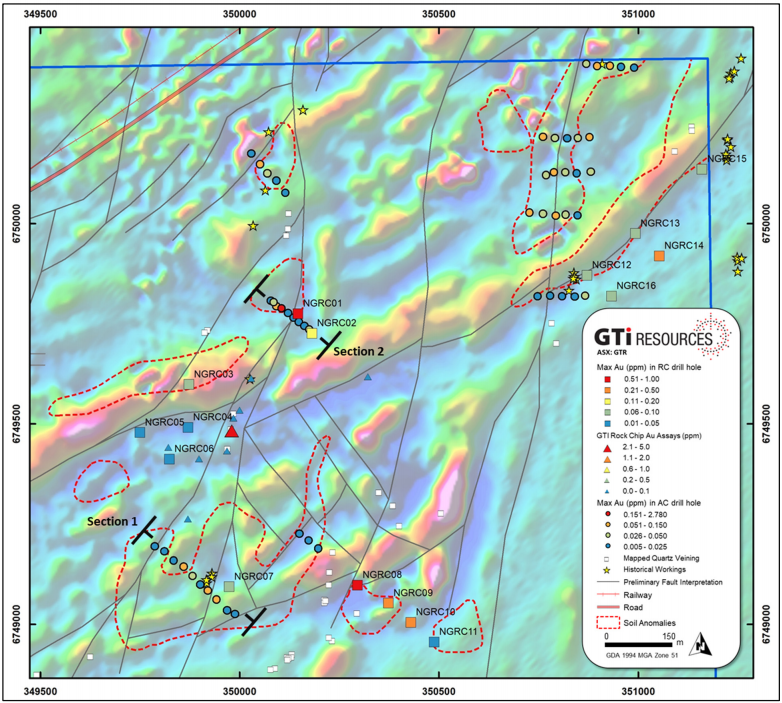 In addition, the drilling has helped to interpret the structural geology and identify a new target below a rock chip sample assaying 2.4 g/t gold.

This land package now creates a significantly enlarged consolidated holding over extensive historic mine workings of the Niagara gold mining district as shown below. 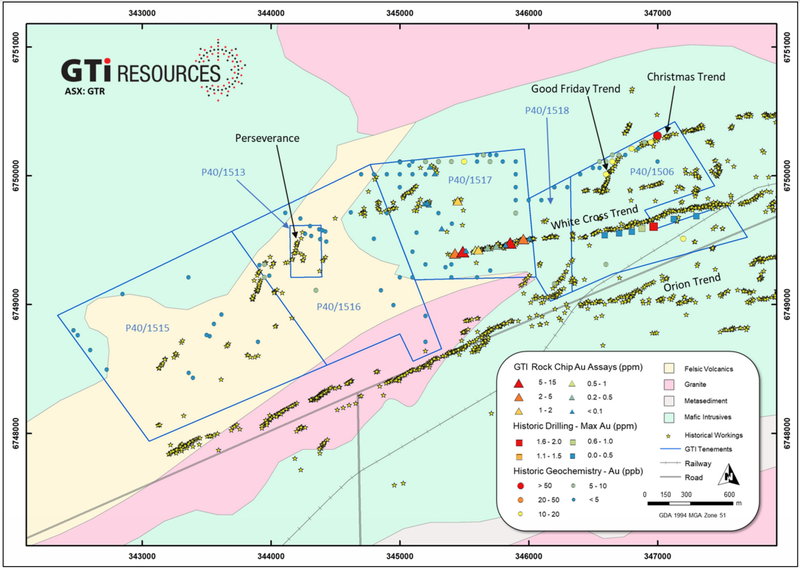 The tenements incorporate the historic White Cross and Perseverance mining areas and smaller historic working trends including the Christmas and Good Friday trends.

The Orion Trend extends east north-east to the south of the tenement holdings and hosts the historic Orion/Sapphire Mine.

Correlation of downhole assay results with magnetic trends and surface features such as anomalous auger results and/or the location of historic workings has provided information that will assist in the interpretation of the primary structural trends.

The interpreted east‐dipping, NNE‐trending structures are consistent with similar structures regionally that host high profile deposits such as Cosmopolitan, Altona and Champion.

Rock chip sampling of quartz veining along the NNE trend between drilling sections 1 and 2, yielded assay results with up to 2.4 g/t gold, and these more recent results further confirm the gold anomalisms related to this trend and provide encouraging targets for follow‐up exploration.

A first‐pass compilation of historic records indicate there has been little modern systematic exploration coverage of the western Niagara Project area covered by the newly granted Prospecting Licences.

Compilation of data will continue to extract additional information from older exploration and mining records in the licence areas in the lead up to planning targeted exploration activity.

The data compilation suggests mineralisation associated with these workings has not been sufficiently tested at depth and therefore represent a strong target for follow‐up exploration.

Records show that modern drilling programmes are notably limited in the areas covered by the newly granted Prospecting Licences.

Only one drilling programme from Laconia Resources Limited between 4 August 2010 and 3 August 2011 is recorded within the tenement package.

The drilling sparsely tested depth extensions of historical workings on the White Cross Trend with results of up to 1.95 g/t gold.

The remaining drilling programmes in the area of interest are otherwise immediately outside the tenement boundaries and further work is required to determine the potential for drilled structures to extend into the current GTI landholdings.

The results from CSA Global Rock Chip sampling along the White Cross Trend highlights this structural trend as an exploration target for consideration, together with follow up mapping, sampling, and potential drill testing of targets within the Prospecting Licences.

A subset of samples from the gold assays from RC drilling on E40/342 will be considered for additional multi‐element analyses.

Such multi‐element analyses will refine the geochemical fingerprint of the mineral system and assist in vectoring towards mineralisation.

Compilation of historical data over the newly consolidated Prospecting Licences will continue with an emphasis on extracting value from older exploration activities.

This information will be taken together with the current understanding gleaned from results to date, and mineralisation occurrences more regionally, to target further exploration efforts.

Further geophysical work is also being evaluated over the western-most portion of the newly consolidated land package.

Results from these activities will assist in targeting future RC drilling programs, which could test the potential for gold mineralisation at depth beneath historical workings, and additional targets as determined by ongoing work.

GTI is also preparing a fieldwork program at its uranium prospects in Utah when spring commences in March/April, and management will provide a separate update on these activities.