GTI Resources Ltd (ASX:GTR) has completed planning and permitting for the first phase of exploration after the settlement of the acquisition and transfer of two State of Utah mineral leases from Anfield Energy Inc.

The purchase of the leases serves to join the Jeffery and Rats Nest projects and to consolidate ownership across a contiguous 5.5 kilometres of the interpreted mineralised trend.

GTI has approximately 1,500 hectares of land holdings in the Henry Mountains region of Utah, within the Garfield and Wayne Counties.

The region forms part of the prolific Colorado plateau uranium province which historically provided the most important uranium resources in the US.

The region benefits from established infrastructure and a mature mining industry. 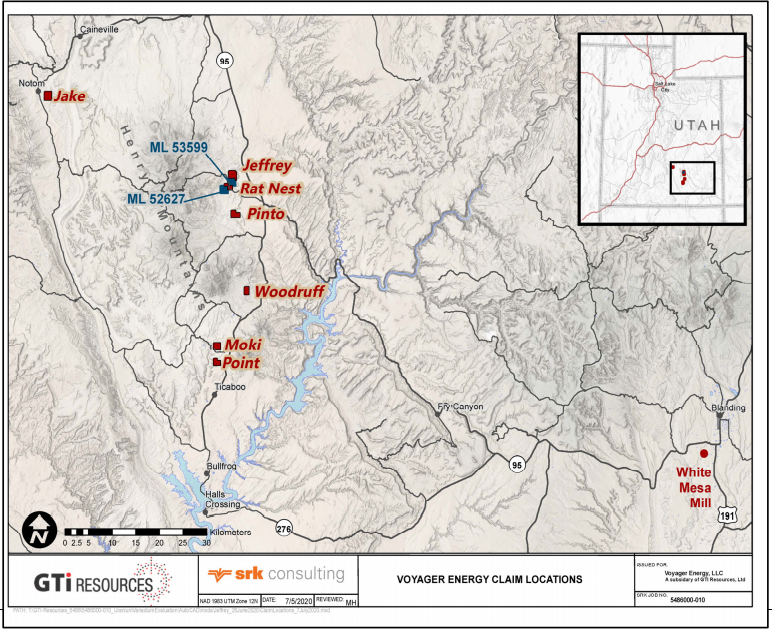 A full review of a data package was conducted in 2020, supporting management’s decision to acquire the data with a view to guiding exploration activities on the leases.

This data further confirmed the excellent prospectivity of the acquired land package.

Exploration activities conducted during the December quarter of 2020 focused on a significant exploration and development target within the Section 36 mineral lease, one of the two newly acquired leases.

Underground mapping was completed on two historical developments as shown below at the East Mine and the West Mine. 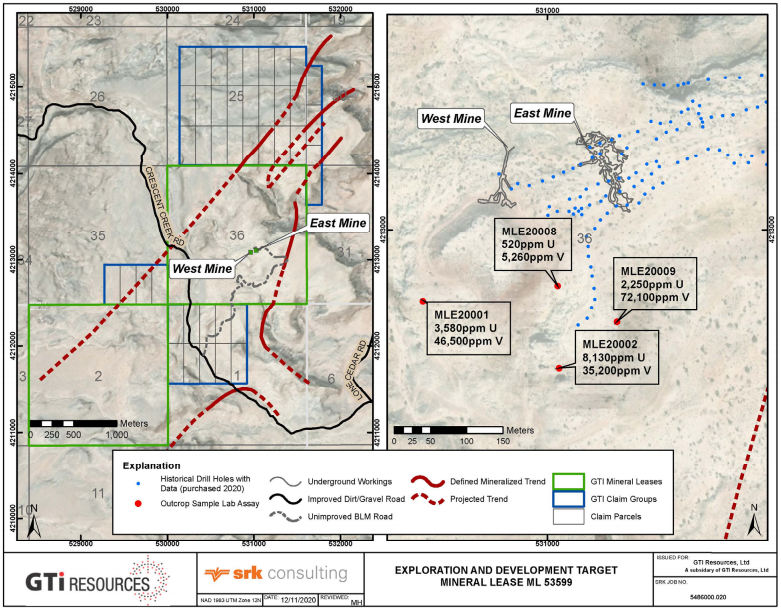 Completion of the surveys required installation of over 50 new survey stations within the workings to ensure the accuracy of the mine maps.

Both mines were operated into the late 1970s and show evidence of more modern mining techniques than seen in much of the Henry Mountains uranium district.

Although idle for 50 years, both mines are in very good condition attesting to the excellent ground conditions and they have existing declines for access.

The prospectivity of this area was previously demonstrated by pXRF data and sample assays reported by the company in 2020.

As a follow-up to this work, GTI completed underground mapping of the two prominent underground developments, coupled with high volume pXRF screening throughout these workings to define local characteristics of the mineralisation.

Through this work program GTI has mapped over 1,300 metres of underground development, and pXRF screening has provided results as high as 19.64% U3O8 and 6.08% V2O5.

Management believes that this early stage exploration work is only beginning to show the prospectivity of the project, strongly validating the acquisition of the leases, as well as the overarching strategy to develop a uranium and vanadium project within the Henry Mountains Uranium District.

GTI has finalised exploration permitting and management expects field work to start during March or April once weather allows.

The company will leverage the existing underground developments to aid in rapid advancement of the project.

The results of this program will allow for study of the controls and distribution of grade material, as well as generating data for construction of a possible mineral resource, work that is planned for the June quarter of 2021, with a follow-up program in the September quarter based on results.

Additional small‐scale exploration and sampling activities will also be completed on an ongoing basis.

GTI has continuously generated high‐quality, low‐cost data to enhance the company’s understanding of the potential of the expanded Jeffrey and Rats Nest project area over the past 12 months.

In addition, management continues to seek additional value accretive opportunities to expand its US portfolio.

GTI has engaged an experienced engineering firm with a history of uranium exploration, mining and land reclamation to conduct the 2021 exploration plan.

Commenting on these developments, executive director of GTI Bruce Lane said, “GTI is excited about the results of recent exploration activity on the newly acquired leases and sees real potential in the district for mine redevelopment and the production of high‐grade uranium and vanadium ores.

‘’We look forward to commencing our exploration program soon and will provide more details and results as work progresses.”

Indeed, GTI has numerous opportunities to work with given both the East Mine and the West Mine have identified ore-grade mineralisation along their full peripheral extents, indicating significant potential for mineral continuity beyond the current developments.

While shares in GTI have retraced slightly in 2021, they are still trading at a 300% premium relative to where they were 12 months ago.

Consequently, there appears to be a good degree of confidence in management’s exploration strategy in 2021, suggesting the recent pullback may represent an opportunistic entry point.