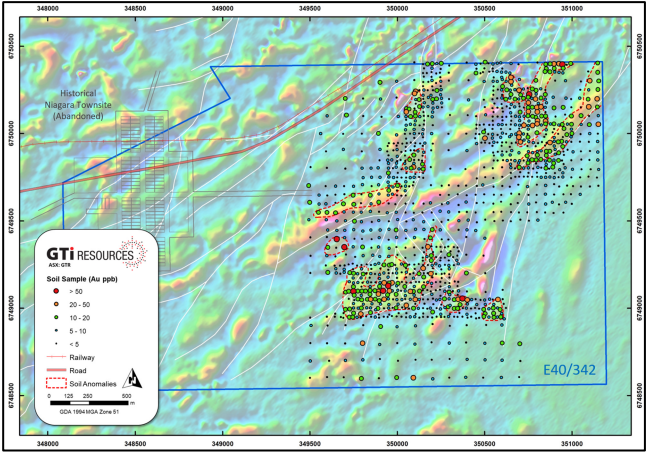 The results confirmed several new gold anomalies that are coincident with the interpreted magnetic structures, including a 500-metre long by 100-metre wide anomaly above 10 parts per billion gold contour, up to a peak of 79 ppb, in the north-eastern corner of the licence that lies on a similar orientation to other known gold mineralisation within the Niagara-Kookynie district.

This program is the next step in GTR’s rapid evaluation of the potential for economic gold mineralisation across the newly consolidated and historically under-explored Niagara Trend in WA’s highly prospective eastern goldfields.

The project is located within the central part of the Norseman‐Wiluna greenstone belt and numerous historical workings occur within and to the north of the project area, with a number of major historical mines located in the immediate vicinity of Kookynie, including the Cosmopolitan Mine which produced approximately 360,000 ounces of gold at an average grade of 15 g/t gold from 1895 to 1922.

A fine time to accelerate exploration

It would be highly beneficial for GTR given the current Australian dollar gold price if this accelerated and extensive exploration campaign were to shape the way for a swift move to early-stage production.

While some corners of the investment community are focusing on gold’s retracement from about US$1950 per ounce to US$1860 per ounce over the last month, what appears to have gone unnoticed is the sharp depreciation of the Australian dollar against the US dollar that has occurred in the last week.

If we look at the last few weeks in isolation, the Australian dollar gold price was $2667 per ounce on 17 September when the price was US$1950 per ounce.

The average operating production costs are in the vicinity of about $1350 per ounce, implying a hefty margin of about $1300 per ounce at current spot rates.

Consequently, GTR is very much a right place/right time story, particularly given the region’s history of yielding high-grade mineralisation that can significantly drive down the cost of production.

The current 60-hole program of aircore drilling is underway and is expected to be completed by early October.

Initial aircore drilling progress has been promising with 15 holes completed for a total of 2,500 metres.

The current round of drilling is on track to be completed by early October with assay results anticipated by late October.

An RC rig is scheduled to start testing bedrock targets during late October following receipt of results from the current round of aircore drilling.

Consequently, multiple potential share price catalysts are imminent, particularly in relation to results from deeper reverse circulation drilling that should be received in November.

The retracement in the company’s shares over the last month or so is arguably a function of broader share market volatility and a tapering in the gold price.

With the latter not representing an issue for Australian gold miners, this may be an ideal time to snap up GTR at an attractive price.