It was just this morning in our gold feature that we flagged Dateline Resources Ltd’s (ASX: DTR) imminent drilling results as a potential share price catalyst.

The following is an excerpt from our overview of Dateline’s operations and prospects:

The company is awaiting the return of assay results for more than 60 samples which are expected back by mid-August, and at that stage they will be digitized and presented to the market.

Management expects to be able to establish a mineral resource estimate in the December quarter, and the upcoming drilling results will feed into the resource definition, suggesting the release of this data could be market moving.

Dateline has delivered in spades, providing a promising update on the maiden surface drilling program which commenced on June 3, 2019 at the northern section of the Gold Links project in Colorado.

The company’s success was reflected when the market opened on Tuesday morning as investors flocked to the stock.

Dateline’s shares traded more than 30% higher, reaching levels that imply a 100% gain in less than a month.

Not only has the company identified high grade mineralisation characteristic of previous mining at the site, but it has intersected a new mineralised structure east of the Sacramento vein.

A previously unmapped and unknown area to the east of the Sacramento vein was intersected in the course of reverse circulation drilling.

The altered zone is 65 metres wide and had several distinct zones of quartz veining, four of which contained anomalous gold values.

Follow up drilling as indicated below will be made to test the area adjacent to this intercept.

Mineralisation was intercepted over 225 metres of strike and 60 metres down dip.

Providing further promise is the fact that mineralisation remains open in all directions.

One of the key takeaways was from a deeper hole which had the widest intersection and the highest gold and silver grades, boosting management’s confidence that other veins at Gold Links are likely to have similar high-grade deeper extensions.

There were numerous other high-grade gold and silver hits, and the presence of high grade silver should resonate with the market given that the precious metal has been going stride for stride with gold over the last three months.

As can be seen below, both metals have gained approximately 15% since May. 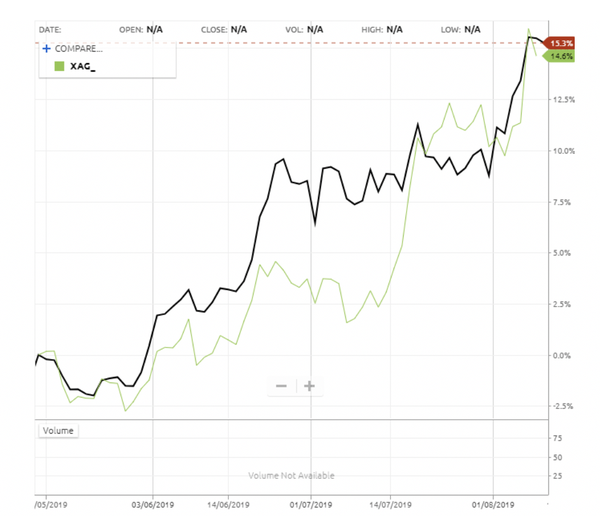 Further catalysts on the horizon

With results from drilling the 2150 veins located in that Gold Links North imminent and deeper extension drilling planned at Sacramento, there are numerous catalysts which should assist in maintaining share price momentum.

The company is also in good shape financially as it has nearly $5 million in cash to fund further drilling.

This suggests that the company’s market capitalisation of just over $20 million doesn’t capture the value of the group’s assets or the exploration upside.

Given Gold Links has produced in excess of 125,000 ounces of high-grade gold there is a valid argument to suggest that some material value should be attributed to the project.