The copper price has soared since March last year when it slipped below US$5000 per tonne to trade at about US$4700 per tonne for the first time since 2016.

However, the recovery since then has been outstanding with the red metal closing out last week at US$8146 per tonne, representing a gain of more than 70% in just over nine months.

While the share prices of blue-chip players with strong exposure to the metal have experienced substantial gains, there are some smaller emerging players that could respond sharply to the buoyant environment in 2021.

On the blue-chip front, it is hard to go past Rio Tinto in terms of being significantly leveraged to a strong copper price, and its shares have increased more than 50% from less than $80.00 in March last year to recently hit an all-time high of $127.00 per share.

While the companies we will be discussing are at an early stage of pursuing much smaller projects than those operated by Rio Tinto, one factor they have in their favour is that they are targeting mineralisation that is also prospective for gold which continues to hover in the vicinity of US$1850 per ounce, implying healthy margins relative to production costs.

One of the key benefits experienced by copper-gold producers is the significant cost offset offered by the by-product, whether it be a predominantly copper mine with gold credits or a gold mine that benefits from the additional sale of copper.

The following chart shows that the copper price is sitting proximal to an eight year high, and is approximately 40% above the 25-year median price of about US$5700 per tonne.

Gold is trading at an even higher premium to the long-term median price, which on a 40 year basis is approximately US$1050 per ounce.

The current price isn’t far off the all-time record high of more than US$2000 per ounce set last year, and with significant volatility in the US and China, as well as the impost of the coronavirus on global economies it wouldn’t be surprising to see the precious metal revisit or exceed last year’s high.

However, before delving into their operations we will provide a real-life snapshot of a copper-gold project, highlighting the significant cost reductions that can be achieved in comparison with a gold mine that doesn’t benefit from by-product credits.

In order to narrow the focus and simplify the means of comparison, we highlight a three month period of operation, being the June quarter of fiscal 2020.

Newcrest’s key producing assets in Australia are its gold-copper Cadia Project in New South Wales and the Telfer gold-copper-silver mine in Western Australia.

The company also generates substantial gold production from the Lihir mine in Papua and New Guinea, but this project doesn’t benefit from by-product credits.

As indicated below, Lihir’s gold production for the June quarter of 2020 was an impressive 207,233 ounces, but the All in Sustaining Costs (AISC) were $1352 per ounce. 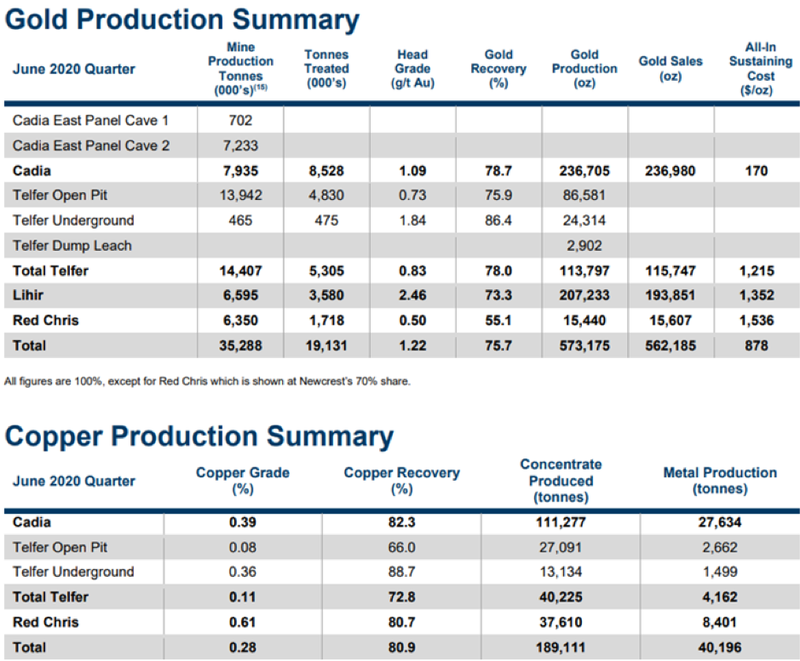 By comparison, the Cadia Project produced 236,705 ounces in the June quarter at an extremely low cost of $170 per ounce.

With the Australian dollar gold price currently hovering in the vicinity of $2400 per ounce, this implies a particularly healthy margin of $2230 per ounce.

Harking back to the benefits of copper and gold production, much of this substantial gap between the costs of production can be attributed to the credits Cadia received from its significant copper production.

The first of our three emerging gold-copper plays that we examine is Los Cerros, a company that is about to embark on its largest year of exploration drilling to date in Colombia with a view to uncovering the true size potential of its Tesorito and Chuscal porphyry prospects.

The company has had considerable success at Tesorito, both in terms of drill results and understanding the geometry of the near surface, southern Tesorito gold/copper porphyry.

TS-DH14 was planned to test for depth and western extensions, and it is the first of a systematic program of holes expected to lead to a maiden JORC resource estimate for the Tesorito southern porphyry.

The following map shows TS-DH14, a step-in hole from TS-DH02 which delivered the longest intercept to date and ended in elevated copper. 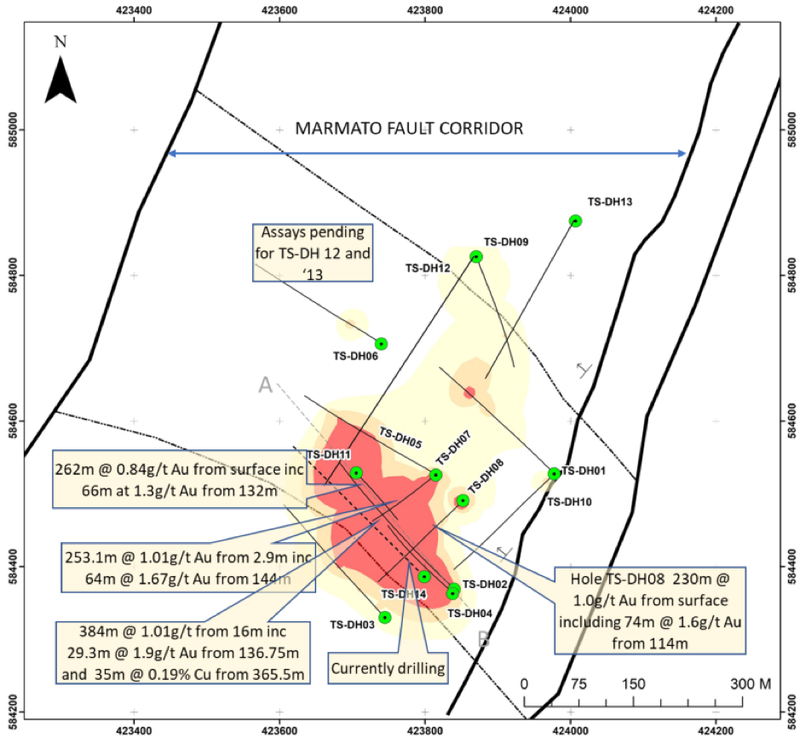 The much anticipated assay results for the last hole completed at Chuscal are imminent.

Drilling has now commenced on the eastern porphyry target which is interpreted to lie under historical workings and strong surface anomalism under very extensive downhole widths.

Los Cerros enters 2021 with cash of approximately $7 million which leaves the company well-funded in terms of undertaking its aggressive drilling program.

Investors appear to have moved ahead of the release of upcoming drilling results with the group’s shares having gained more than 30% in the last three weeks.

However, positive news could see further upside as Los Cerros looks to recapture its 2020 high of 23 cents.

Interestingly, the fundamentals that prevailed when the group’s shares increased three-fold in September are still in place, and given that the copper price has increased significantly over the same period it could be argued that the company’s investment appeal is comparatively even more compelling as things currently stand.

The Australian projects include the Yarara Gold Project in the NSW Lachlan Fold belt, Noombenberry Halloysite Project near Merredin, WA, and the Big Grey Project in the Paterson region, WA.

Highlighting the group’s diversification, management recently signed a JV agreement with the Argentinian company Integra Capital to fund the next phase of exploration on its lithium pegmatite projects in Catamarca, Argentina.

Shares in Latin Resources have doubled since November as investors target the stock ahead of a potential rerating in 2021 which could well be driven by exploration results.

Complementing the Yarara Project is the securing of a major new project within the East Lachlan Fold Belt.

The project is located 30 kilometres to the west of Orange in NSW, 30 kilometres to the north-west of the Newcrest’s (ASX:NCM) world class Cadia Gold-Copper Mine (22 million ounces gold, 4.3 million tonnes copper) and 60 kilometres west of Regis Resources’ (ASX:RRL) McPhillamys Gold project (2 million ounces gold) which is hosted by similar geological trends, including being situated within the regional Lachlan Transverse Zone (LTZ).

Consequently, this is an excellent address with the potential to deliver outstanding exploration results in the relatively near term, while also perhaps heralding the commencement of a flagship copper-gold project for Latin Resources.

It is worth noting that these mines are traditionally low-cost, long-life projects with copper credits effectively driving down the costs of gold production. 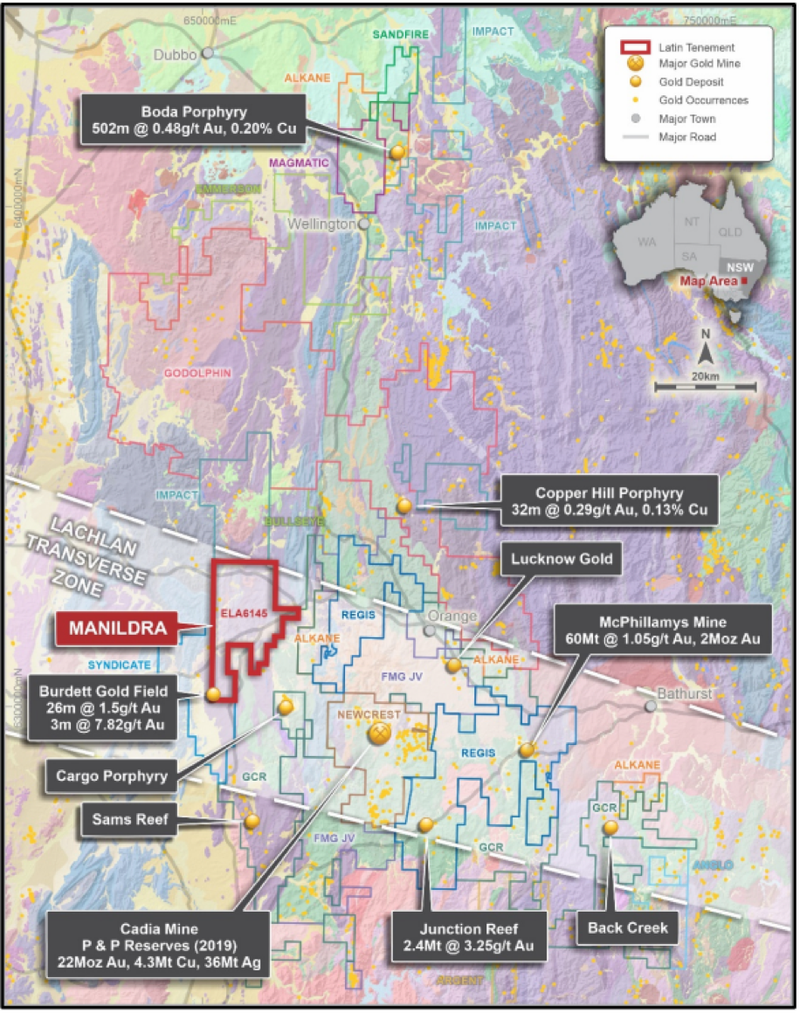 Harking back to the Yarara Project, the securing of land access agreements has opened the door for the company to commence the on-ground reconnaissance mapping and prospecting work that is required to finalise drill target locations for ground-disturbing applications.

Latin Resources also has copper exploration interests in Peru, but on-ground activities on the company’s Joint Venture with First Quantum over the MT-03 Copper Project have been delayed due to the Covid-19 lockdown restrictions in that country.

A detailed ground magnetic survey is now planned over the MT-03 anomaly to assist in the targeting of planned maiden drill testing of the initial anomaly.

It is worth noting that the company’s assets are located in relatively close proximity to prolific copper-bearing regions of Peru.

Titan Minerals has two promising projects in Ecuador, being Dynasty and Copper Duke, and the company has been undertaking an extensive diamond drilling program in order to define a higher resolution geological model to support its established data.

Titan’s shares are up about three-fold from lows early in the year, but Reg Spencer, an experienced mining analyst at Canaccord Genuity sees further upside.

He has a price target of 25 cents per share on the stock, derived mainly from applying a peer average enterprise value/resource ounces multiple in relation to the established resource at Dynasty.

Discussing the group’s focus on Ecuador, Spencer said, ‘’The adoption of an investment-friendly Mining Code and fiscal framework in 2015 resulted in a significant increase in exploration and development activity, headlined by the recent discovery of the 10 million tonnes copper/23 million ounces gold Alpala deposit, and successful mine developments at the 300,000 ounce per annum Fruta de Norte gold mine and circa 100,000 tonne per annum copper Mirador copper mine.

‘’The improved standing of Ecuador and its mineral potential is further highlighted by numerous majors now being active in the country, including BHP, Fortescue, Anglo American, CODELCO and Newcrest.’’

Titan’s drill programme has been increased from 6000 metres to 12,000 metres to accommodate for additional deeper drilling on mineralisation confirmed with depth in drilling results announced to date at Cerro Verde.

Discussing the Dynasty Project, Spencer said, ‘’We consider the Dynasty project area to be drastically under-drilled, with only circa 26,000 metres having been drilled on the property.

‘’Key exploration opportunities include depth and strike extensions (including 4 kilometres of undrilled strike in areas of known mineralisation identified in surface sampling), as well as testing for previously unidentified mineralisation under cover.

‘’The most advanced prospects include Cerro Verde, Iguana and Papayal.’’

All core samples for the Iguana Prospect from 21 holes totalling 4,560 metres drilled are now at the laboratory with results anticipated in late-January, a potential share price catalyst.

At Dynasty, Titan believes the geophysical results will enhance the regional geological interpretation of the district by identifying multiple anomalies associated with major structural features in the 9 kilometre long corridor of outcropping vein-hosted mineralisation. 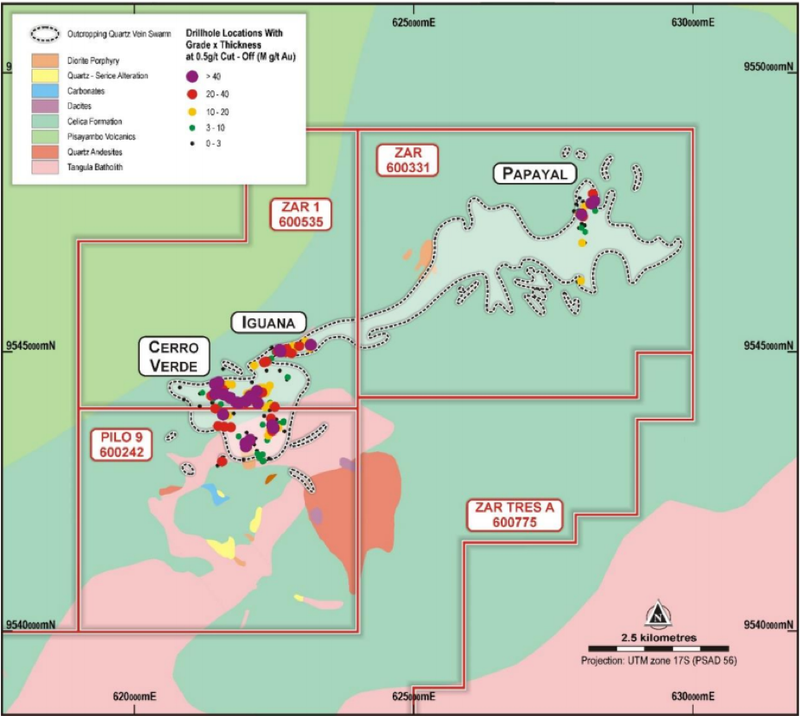 Copper Duke adds further flavour to the story with results expected to unlock its large-scale potential and identify areas of mineralisation.

Spencer is upbeat about Copper Duke’s prospects, saying, ‘’The project presents as a highly prospective yet mostly unexplored opportunity, with the potential for both porphyry copper-gold and high-grade epithermal gold mineralisation.

‘’Prospectivity is characterised by numerous large-scale gold and copper-gold anomalies over a 50 square kilometre area, with geophysics and initial drill-hole targeting planned for the coming months.’’

Additional data along with the refined geological interpretation will be used to rate and rank targets for maiden drill testing at Copper Duke in 2021.