AusQuest Limited (ASX:AQD) has completed the Stage 2 drilling program at the Hamilton Copper Project in north-west Queensland with a total of seven holes drilled for 2,098 metres.

This program is being conducted under the group’s Strategic Alliance Agreement (SAA) with South32 (ASX: S32).

The Hamilton Project is 120 kilometres south of the world-class Cannington mine, owned and operated by South32.

Exploration is targeting IronOxide Copper-Gold (IOCG) mineralisation similar to that found at the Ernest Henry mine to the north of Cannington.

The drilling program has provided an approximate 500 metre spatial coverage around earlier drillholes WD02009, WD02010 and HMDD03 that provided strong indications of alteration and the potential for nearby copper mineralisation as illustrated below. 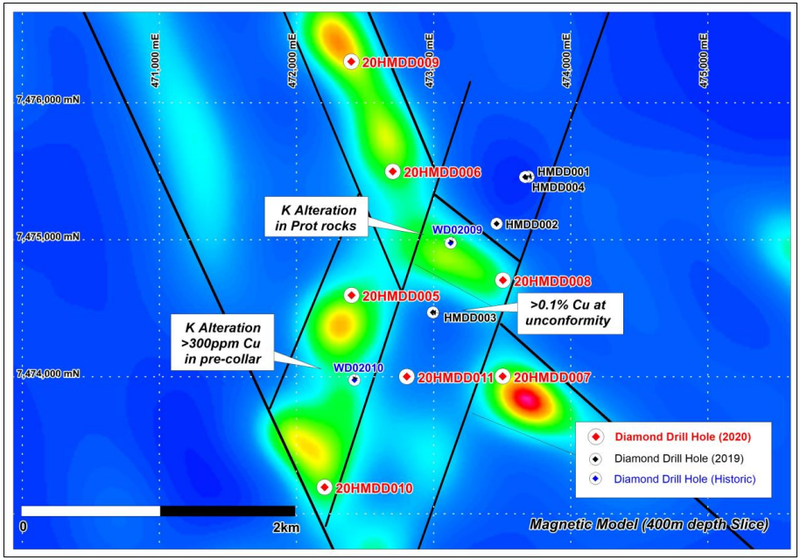 Strong alteration from the current program was reported in drill-holes HMDD05 and 06 which were located closest to the earlier drilling, with the more distant drill-holes intersecting lesser amounts of alteration within a banded meta-sedimentary sequence.

The cover sequence from Eromanga Basin sediments was found to be approximately 200 metres thick in all drill-holes.

The alteration appears to be highly variable from hole to hole, making correlations difficult, especially given the wide spacing (+500 metres) between drill sites.

The drilling program was designed to provide wide-spaced, systematic geochemical sampling of the Proterozoic bedrock beneath the Eromanga Basin sediments across target areas defined by aeromagnetic data, in order to identify potential ‘vectors to ore’ across the prospect.

Drill-core samples of bedrock and the cover sequence (about 20 metres above the unconformity) were collected and sent for analysis.

Assay results are expected over the coming weeks, at which time an assessment of the drilling program will be possible.

Computer modelling of geophysical data identified potential structures and preferred sites for drilling based on analogies with the Ernest Henry copper deposit, 250 kilometres to the north.

This has boosted management’s confidence, and managing director Graeme Drew said, “We are now eagerly awaiting assay results so we can identify potential ‘vectors to ore’, given that the holes were drilled so far apart to cover the large scale of the prospect.

“Some features we have seen, especially in holes 5 and 6, continue to suggest that we may be close to a mineralised system, and the wide spacing of drill-holes means there is still a lot of space to hide a deposit the size of Ernest Henry.”