Two important developments have occurred in the last two days that have positioned South American gold explorer Los Cerros Limited (ASX:LCL) as a more focused and financially robust group as it enters an important phase of exploration at the group’s Quinchia Gold Project in the prolific Mid-Cauca Gold Porphyry Belt of Colombia.

On Tuesday, management advised that the company had received firm bids for more than four times the targeted capital raising, positioning it to accept binding commitments for a placement of $10 million (before costs), being the company’s current maximum capacity under listing rules.

The placement put Los Cerros in an extremely strong position to pursue a substantial and sustained three-rig diamond drilling program across multiple sites while also providing the capacity to make a one-off payment of $2.2 million for the immediate extinguishment of an existing debt held by FirstRand Investment Holdings (RMB), which would have otherwise totalled $3.5 million.

The agreement also includes the reduction of potential future royalty payments on the Quinchia Project from $15 million to $14 million (payable at a rate of 2% of net smelter revenue).

Managing director Jason Stirbinskis outlined that these developments were not just beneficial from a financial and operational perspective, but they also represented a strong endorsement of the group’s project.

“We view this incredibly strong result as a mandate to be bold and proactive in seizing the opportunity created by the confluence of our established strategic direction, recent drilling success, investor traction and strong gold price, Stirbinskis said."

‘’We are very pleased to see a number of reputable mining investors join our register with this Placement, and see it as a strong endorsement of the quality of the Quinchia Project.

‘’With very significant funding secured, the Los Cerros team can be entirely focused on delivering results from the current multi-rig drill program and also bring forward a number of exploration initiatives and related strategies.

‘’We expect this coming year to be a very positive time for Los Cerros and for our shareholders.”

Los Cerros’ shares have traded strongly in September, and it is worth noting that the current price of 18.5 cents represents a premium of more than 50% to the placement price. 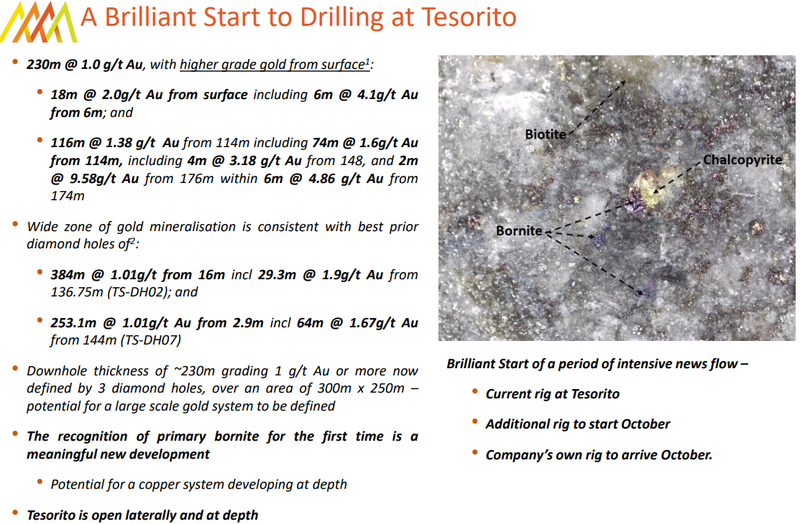 In another positive development, Los Cerros announced today that it had sold North Hill Ovalle Inc and the Loica and Vallecillo projects held within a separate investment vehicle to a Chilean citizen for US$100,000.

The sale of the company’s residual interests in Chile follows on from the sale of the Mollacas project in January 2020 for about US$1 million.

Resolving the RMB debt and completing the asset sales are part of the broader strategic re-invention of Los Cerros which has included a critical review and prioritisation of the extensive asset portfolio, resolution of legacy issues and stream-lining of the company structure to focus on its Colombian portfolio.

In line with those objectives, management also advised that it had liquidated its Peruvian subsidiaries, Cerro Norte Mining Inc and North Hill Peru Inc.

The two subsidiaries did not hold assets and were relics of previous company activity.

Los Cerros now shapes up as a leaner and cleaner group with the financial capacity to pursue an aggressive exploration campaign in a highly prospective area of South America.