Metminco Limited (ASX:MNC | AIM:MNC) has announced assay results for the first two diamond drill holes from its Tesorito gold prospect at its Quinchia Gold Portfolio in the Quinchia district of Colombia.

Assay results from the first two drill holes at Tesorito are as follows:

Assays from hole TS_DH_04 include:

Assays from TS_DH_05 include (partial results):

MNC expects to receive assays for the remainder of TS_DH_05, 06 and 07 in August.

What these results will show is yet to be determined, so investors should take all publicly available information into account and seek professional financial advice before making an investment decision.

This and previous drilling confirms the gold mineralisation (over 0.5 g/t Au) is extensive in area (400m x 180m) and is open laterally to the north-northeast, east-southeast and at depth.

This included hole TS_DH_02 which reported 384m at 1.1g/t gold from surface to end-of-hole. The program will also test a previously undrilled geophysical anomaly located approximately 300m to the northwest of TS_DH_02. 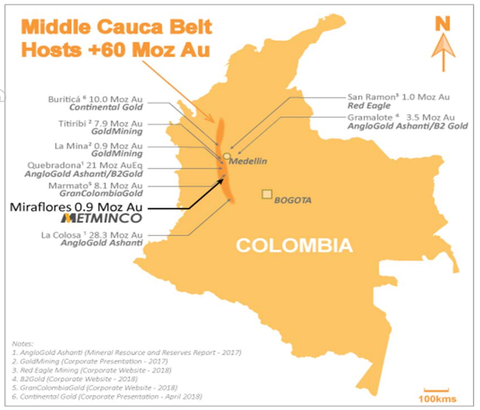 MNC believes the mineralisation at Tesorito represents the gold-rich cap of a deeper base-metal rich porphyry system. This view is supported by the phyllic alteration and increasing base-metal content and igneous activity with depth seen in several holes.

The intensity of hydrothermal alteration seen at Tesorito together with prolific gold mineralisation already recognised in the Quinchia district and elsewhere in the Cauca belt suggests this to be major mineralising system which offers great potential for exploration success.

This latest news comes after a broker report from Stockdale Securities earlier this month when it initiated coverage with a “Buy” rating. At that time all assay results from MNC’s Tesorito gold prospect were pending, and Stockdale noted that it expected “a re-rating of MNC’s stock on the back of results, confirming extensive gold mineralisation”.

In addition to the assay results, the broker also notes that negotiations are on-going with AngloGold Ashanti for a formalised Joint Venture agreement allowing MNC to follow up on a significant gold-in-soil anomaly (>0.5g/t Au over a 500m x 250m area) at the nearby Chuscal prospect.

The broker concluded, “We expect MNC shares to perform well on the back the of continued exploration success while the Company progresses through the permitting and EIA stage at Miraflores.”