Latin Resources (ASX: LRS) announced on Thursday morning that reverse circulation drilling at its Ipizca 11 and Reflejos del Mar deposits had been drilled to a range of final depths between 24 metres and 126 metres with 11 of 13 holes containing significant spodumene pegmatite intercepts with apparent thicknesses ranging between 1 metre and 9 metres.

The intercepts range in depths of between 9 metres and 47 metres, and visible spodumene was evident in all cases.

LRS’s Managing Director, Chris Gale, noted the significance of these developments in saying, “The extension of strike and thickness of intercepts of the pegmatites is extremely encouraging for our Catamarca project, and the visible spodumene in all intercepts is even more encouraging as this is now proving our theory that we do have lithium spodumene at depth at these historical lithium mines”.

Both deposits are part of the Catamarca project where analysis of 29 samples of exposures of pegmatites in old mine workings that have subsequently been collected by LRS geologists reported grades of up to 4.46% lithium oxide.

It should be noted however that LRS is in the early stage of exploration and investors considering this stock for their portfolio should seek professional financial advice.

These developments are also important in terms of the upcoming drilling program. Gale highlighted the fact that the success the company has had with the first two target projects provides confidence moving forward with the rest of the group’s concession holdings.

He noted that there were two more targets yet to drill in the first pass campaign, being Campo el Abra and Santa de Gertrudis.

The following map provides an insight into the extent of LRS’s Catamarca concession holdings and those areas that are the subject of the group’s 2017 drilling campaign. 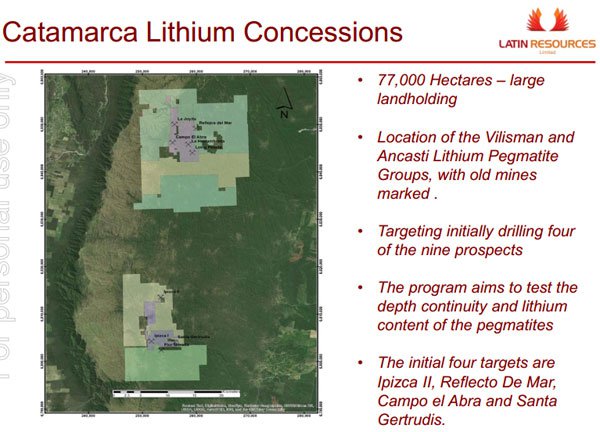 Of significance is the fact that these four targets represent only 8% of the total landholding of 70,000 hectares at Catamarca, indicating there is substantial scale yet to be tested.

Given there have been early shows of spodumene mineralisation the upcoming results of 58 samples that are now being laboratory tested could be significant, and management expects to be in a position to inform the market of assay results in the coming week.