In a development that will enable Province Resources Ltd (ASX:PRL) to accelerate crucial data collection, the company has secured the normally long lead time SODAR monitoring station from Fulcrum3D (Fulcrum) to be deployed in the next four weeks at the HyEnergy ZERO CARBON HYDROGENTM Project (HyEnergy Project).

The monitoring station is critical in collecting preliminary wind and solar data every 10 minutes within the project area to assess the wind and solar resource potential.

The data collected will enable the proposed wind turbines and solar array network to be optimised, prior to the final project scope and scale decision point.

Province’s HyEnergy Project recently gained plenty of attention with the company’s shares soaring more than five-fold in a day, and the early stage deployment of this data collection system could well provide another upward trend given that it shows management’s commitment to quickly advance the project.

On this note, managing director David Frances said, “It is great to be able to hit the ground running on the exciting HyEnergy ZERO CARBON HYDROGENTM Project.

‘’I look forward to progressing the feasibility studies as quickly as possible, whilst also planning the initial fieldwork programs to assess the salt, potash and mineral sands target areas within the greater Gascoyne Project.”

The Gascoyne and HyEnergy ZERO CARBON HYDROGEN projects are located in Western Australia’s north-west and cover an area of 1,408 square kilometres.

The town of Carnarvon is the administrative centre and adjoins the project area.

It has first class infrastructure in place including the Dampier Bunbury Natural Gas Pipeline (DBNGP) and the major North West Coastal Highway with the former being a potential source of power distribution. 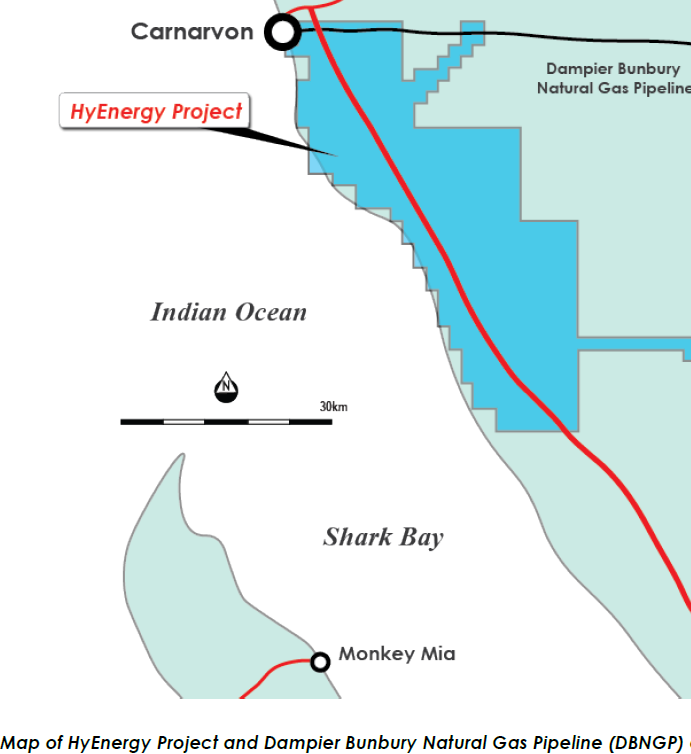 The Renewable Green Hydrogen Project is located in Western Australia's Gascoyne Region and covers a flat-lying arid landscape with low-intensity pastoral land use.

Given Gascoyne's climate and wind patterns, renewable energy is an attractive and viable option.

With low competing land use and proximity to a large regional centre and Carnarvon’s associated infrastructure, the project area is potentially ideal for installation of a commercial-scale wind and/or solar farm, integral to the production of green hydrogen.

The hydrogen industry is in its infancy in Western Australia, but the move into sustainable energy by both governments and corporations around the globe has accelerated driven by technological advances, as well as regulatory changes and stimulus packages offered by governments looking to reduce carbon emissions, and in some cases revitalise economies following COVID downturns.

Green hydrogen produced from renewable sources, such as wind and solar energy, looks set to play a significant role in a decarbonised future and meeting the global aim of net zero emissions by 2050.

Fulcrum3D leads the way in wind and solar monitoring

A wholly Australian-owned company, Fulcrum has established itself as the go-to suppliers of wind and solar monitoring stations, distributing to the major developers and operators alike.

The group’s monitoring systems have been installed and remain operational worldwide, maintaining a strong focus in Australia.

In each case, Fulcrum provides high quality and accurate data through its systems which are proven to be robust and reliable in even the harshest of environments. 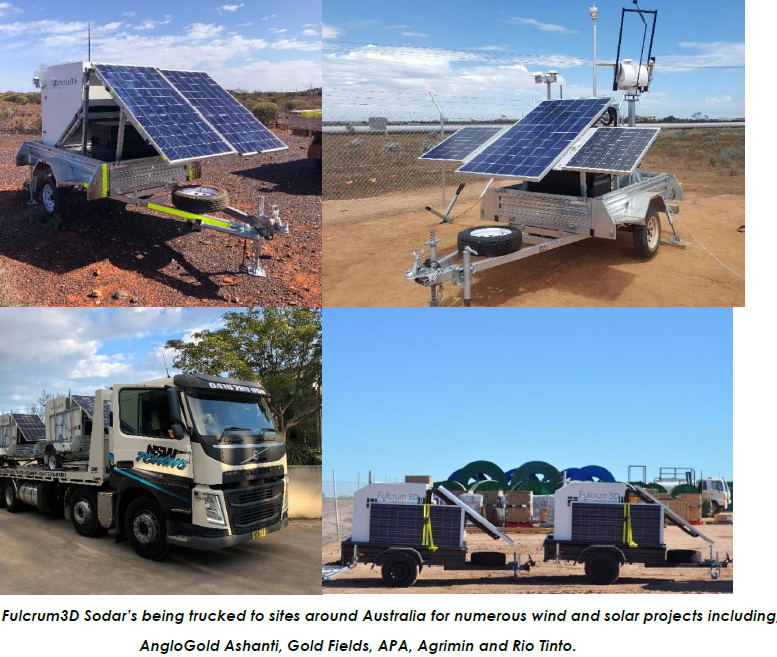 The group regularly works with financiers, engineers and developers in the wind and solar sectors to generate bankable analysis as it understands the required traceability and confidentiality.

The Fulcrum3D Sodar measures wind speeds from 50 metres to 200 metres, providing wind speed and direction data up to and above wind turbine hub height.

The wind resource is ranked fourth in Western Australia for mean wind speeds recorded per annum.

This data is used in bankability analysis and studies ahead of project construction, an essential component in Province completing its anticipated studies.

There are now over 170 Sodar units now in operation around the world, with Fulcrum tailoring its technology to suit specific project requests.

This trend is changing and it is imperative that accurate solar data is captured for the specific site location for such large capital investments to build a solar array network of commercial scale.