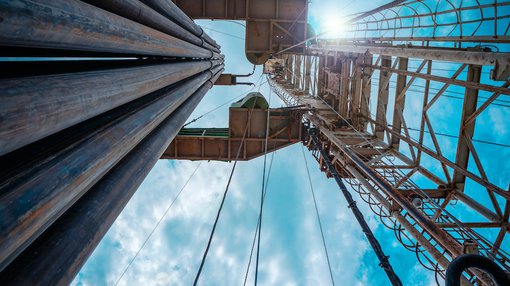 It was with much anticipation that 88 Energy Limited (ASX:88E, AIM:88E) progressed its Charlie-1 appraisal well on the North Slope of Alaska in the first half of the year.

It has taken some time to fully assess the data collected in the process of drilling the appraisal well, but it has been worth the wait: the final petrophysical interpretation released today will potentially upgrade the net hydrocarbon pay in the Charlie-1 well.

This is transformational in that a well that was plugged and abandoned may now be the key to 88 Energy’s future.

However, to fully appreciate the significance of this development and its potential share price impact, it is important to understand the processes that were behind the drilling of Charlie-1 and the events that occurred around that date.

The appraisal well was designed as a step out appraisal of a well drilled in 1991 by BP Exploration (Alaska) Inc., called Malguk-1 which encountered oil shows with elevated resistivity and mud gas readings over multiple horizons during drilling. This wasn’t tested due to complications towards the end of operations.

The result was a lack of time before the close of the winter drilling season, and given that it was drilled using vintage 2D seismic, it was justifiably deemed by 88 Energy as being insufficient to adequately determine the extent of any of the prospective targets encountered.

Therefore management saw a significant opportunity in revisiting the prospect.

The Charlie-1 well reached its Total Depth of about 11,100 feet on 30 March, having drilled through and logged all of the targets in the well, including the HRZ shale.

Results from the logging while drilling program were largely consistent with those seen in the nearby Malguk-1 well drilled by BP with shows and elevated log response recorded over several horizons.

At that stage, the significance of the similarities and differences to Malguk-1 were still to be determined following more detailed wireline logging.

One week later, 88 Energy was able to confirm a large condensate discovery in the Torok Formation, but the issue of its commercial viability was still to be determined.

Shareholders were disappointed that certain goals within the broader program were not achieved, and the subsequent sell down in the company’s shares was exacerbated by news that the group’s joint venture partner Premier Oil had withdrawn from the project.

However, little did they know that data collected from the appraisal at that stage didn’t tell the whole story - what management has since been able to unveil marks the start of a new chapter, perhaps one that will define the future of the company.

Acquisition of XCD brings area of operation to 525,000 acres

It is important to note that 88E’s substantial holdings across the Alaska Central North Slope have a significant implied value, arguably well in excess of the company’s market capitalisation of approximately $50 million.

The recently completed acquisition of XCD Energy Ltd provided 88E with a 100% working interest in nearly 200,000 acres on the highly prospective North Slope of Alaska with the former’s Project Peregrine situated to the south-west on the following map being a key area of interest. 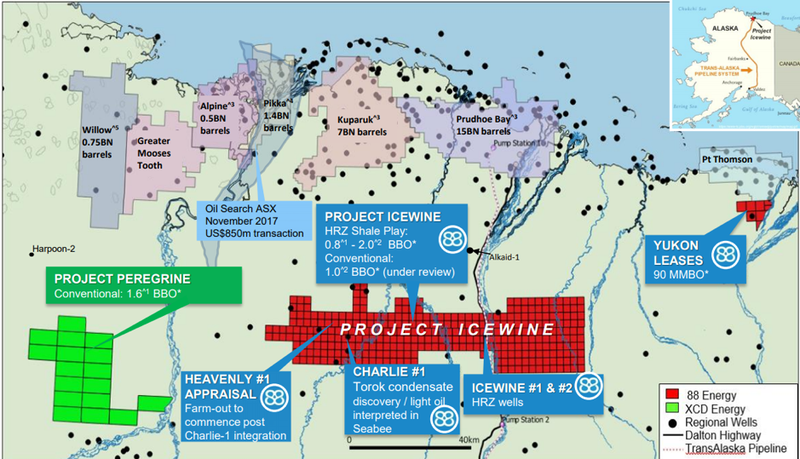 Notwithstanding the initial disappointment regarding the Charlie-1 well, management has pressed forward in terms of delineating the data collected during the drilling of the appraisal well, and this is shaping up as a key catalyst for the group in the coming months particularly given that it will ultimately determine new resource estimates.

The final third party petrophysical interpretation from the recently drilled Charlie-1 well is detailed in the table below. 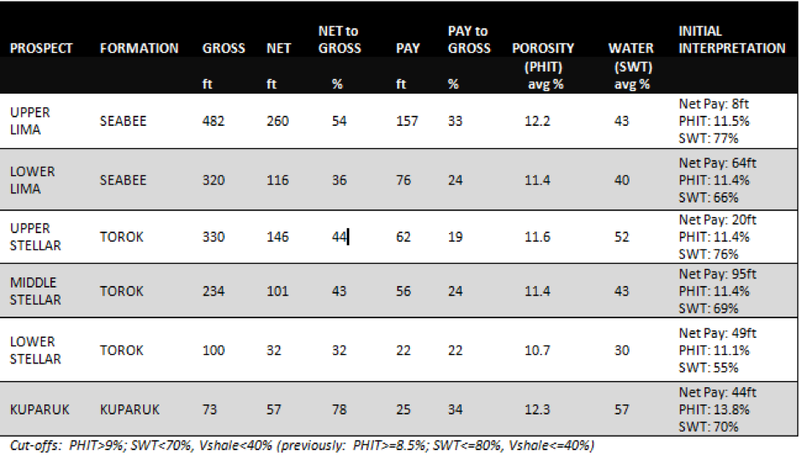 These values consider data from logs obtained during drilling using a sophisticated logging suite as well as multiple laboratory analyses of sidewall cores taken from the key horizons in the Charlie-1 well.

Encouragingly, the final interpretation provides a significant increase in net pay compared to the initial interpretation of 398 feet (vs 280 feet), with the largest contribution coming from the Lima discoveries in the Seabee Formation.

These improvements are despite using higher cut-offs for both reservoir and net pay.

Both Upper and Lower Lima as shown on the following map are confirmed as large oil discoveries by this interpretation and the lab results. 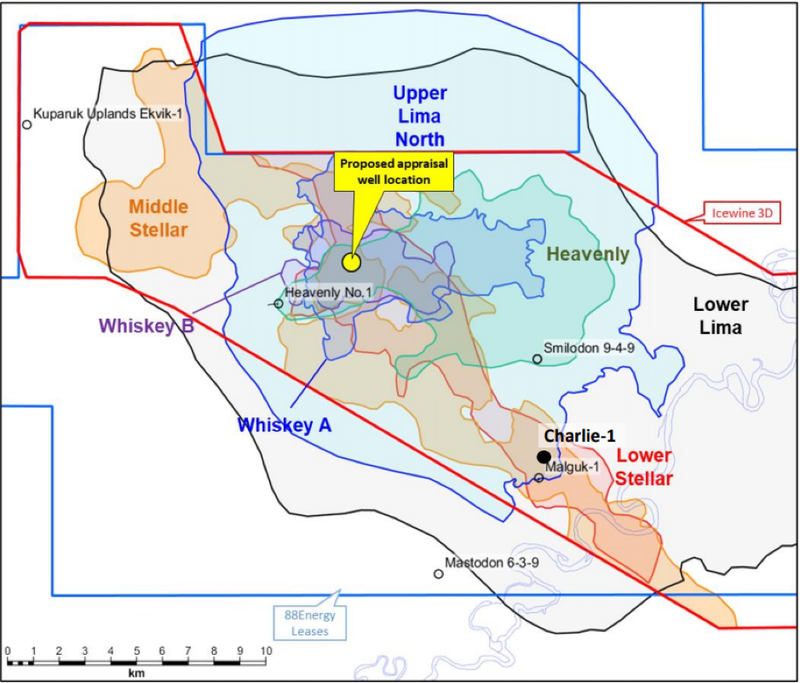 The results are particularly significant as these targets are the most extensive of all of the Icewine conventional horizons as well as being relatively shallow compared with the Torok Formation that was the large condensate discovery made when drilling the Charlie-1 appraisal well.

The extent of the accumulations will be estimated as these final petrophysical numbers are integrated into the updated seismic inversion product.

Similarly, the Stellar targets in the Torok Formation are also confirmed as hydrocarbon discoveries with good liquid hydrocarbon content.

There remains some uncertainty about the gas to oil ratio as the liquid hydrocarbon saturations measured from the Charlie-1 cores in the lab imply much lower gas to oil ratio than that observed during the downhole tests that recovered gas condensate.

It is possible that these liquids may be unlocked by stimulation of the reservoir.

The Kuparuk also remains a prospective target, with anomalously good reservoir quality for its depth, but mapping has not been completed for this horizon and it is considered to be more gas prone than the Torok Formation.

In addition to these developments, the integration of state-of-the-art modern log data from Charlie-1, oil saturated reservoir quality sands in the Seabee Fm can now be resolved with high confidence on seismic.

Improved reservoir quality is clearly evident away from the Charlie-1 location, both up dip and down dip as shown below. 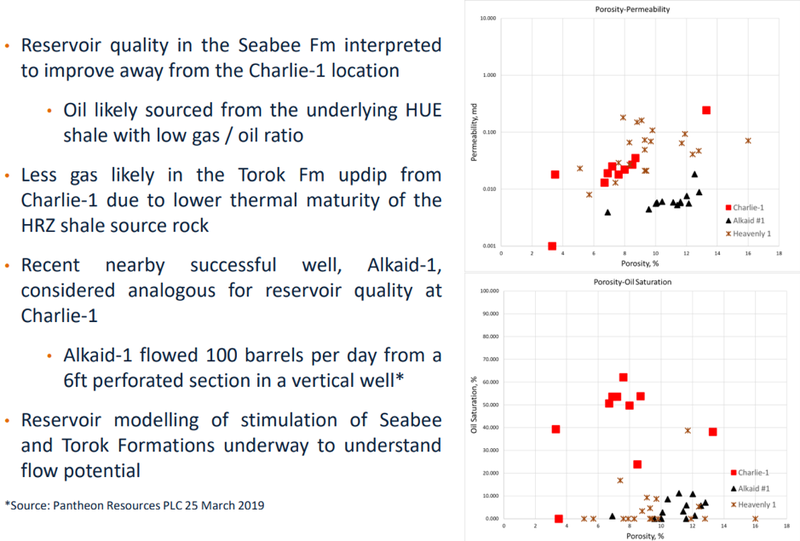 Seabee shaping up as the diamond in the rough

Seabee hydrocarbons have been proven in the course of previous activity, and they have now been confirmed from the analysis of cores from Charlie-1.

Commenting on the significance of Seabee, managing director Dave Wall said, "The results from the Seabee, despite Charlie-1 not being optimally located, are outstanding.

‘’Whilst these may appear as a serendipitous by-product of the Charlie-1 well, internal analysis prior to drilling had already significantly high graded this formation.

‘’However, it was too late to change the objectives/location of the well and that work remained largely on the drawing board.

‘’This final interpretation is a strong vindication of that work, and we are now looking forward to the conclusion of the evaluation of the Seabee oil discoveries as we integrate the petrophysics into the seismic inversion and subsequent mapping effort, which will ultimately yield updated volumetrics for our resources that will feed into the Icewine farm-out process.

There are a number of key developments that could potentially provide positive share price momentum for 88E in the coming months.

These include the farm-out of Project Icewine (conventional) as the evidence for oil with less gas in the Seabee and Torok prospects make them compelling targets.

With 88E now in possession of data that proves better reservoir quality in eight separate Seabee and Torok targets, four of which have been demonstrated to contain hydrocarbons in the Heavenly, Malguk or Charlie wells, attracting a farm-out partner could happen fairly swiftly.

Of course, an additional attraction would be the potential identified in the Seabee Upper Lima North region.

Good progress continues to be made at the newly acquired Project Peregrine on both the farm-out and permitting/planning fronts.

Additional news related to that will be provided in the near term.

Management has received confirmation of the ideal thermal maturity for the HRZ shale, an encouraging development that will form the basis of further work to continue to unlock its large potential.