The conditions on and off the water couldn’t have been better at last week’s Noosa Mining and Exploration Conference.

As we mentioned last week, this is one of the few conferences globally that could genuinely be tagged as family friendly, and this was evidenced by the number of mining company families strolling the beaches, checking out the shops in Hastings Street and hitting the restaurants and bars at the end of another day in paradise.

Some of our leading mining chief executives rose early to take advantage of long rides off the groin at Noosa, and there was also a wave of euphoria for most miners at the conference as most global precious and base metals prices experienced solid to outstanding gains, providing added momentum for companies that delivered positive news during the week.

One of the features of the week was gold as it continued to make new highs in 2019, surpassing the US$1450 per ounce mark to hit levels not seen since 2013.

Coinciding with this rally has been a significant weakening in the Australian dollar against the US dollar, a metric that is also favourable for Australian gold producers.

While the Australian dollar has rallied from about US$0.68 to US$0.70 in the last month, the substantial increase in the gold price still sees the precious metal trading at approximately US$2050 per ounce in Australian dollar terms.

As indicated below (yellow line), on the precious metal front silver has also performed strongly, and in conference week it surged from US$15.38 an ounce to a high of US$16.58 per ounce, an increase of approximately 8%.

This graph charts price activity since the start of June to provide a broader perspective, and as you can see the standout performer has been nickel.

We will see how that translated on the stock front a little later.

However, for the moment it is worth fleshing out the silver story as this can have far-reaching ramifications for a wide range of miners. 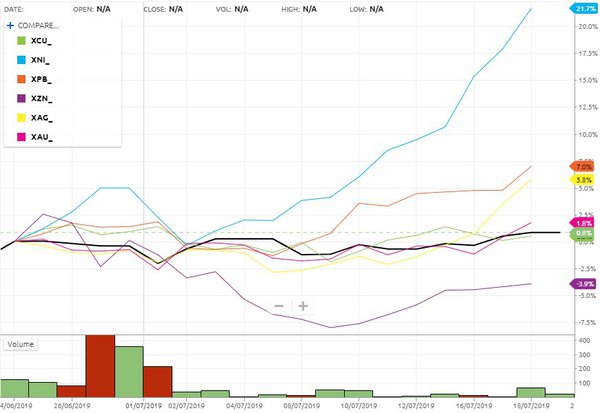 Not only did silver hit a 12 month high, in percentage terms the gain was well ahead of gold, and the metal is now up 14% in less than two months.

Strong silver prices can be very beneficial for base metal stocks as silver is often found in zinc and lead mineralisation.

Revenues generated from the sale of silver provide ‘credits’ which effectively drive down the costs of production.

One emerging base metals producer that could potentially benefit substantially from the production of silver in tandem with zinc, lead and copper is White Rock Minerals Ltd (ASX:WRM).

Using a 3% zinc cut-off grade, the company’s Red Mountain Project in Alaska has a resource of 9.1 million tonnes at 12.9% zinc equivalent including 46 million ounces of silver grading 157 g/t.

Not surprisingly, the company’s shares performed strongly last week as managing director Matt Gill explained the significant upside in terms of base and precious metal resource expansion and the company’s road to production.

Also working in the group’s favour is its advanced Mount Carrington gold and silver asset which has a resource of 341,000 ounces of gold and 23.2 million ounces of silver.

The prefeasibility study at this project has been completed, key infrastructure is in place and there is scope to expand the resource through exploration.

As the following chart indicates, White Rock (orange line) received plenty of support last week with its shares finishing up 14.3%.

Importantly though, this built on strong gains in previous weeks, and at the end of last week the company’s shares showed a month on month gain of 60%.

White Rock has started the week on a promising note, trading 12% higher on Monday morning.

White Rock presented on Wednesday, which was attributed to microcaps (market capitalisations of less than $35 million).

This is often where the under the radar stocks can be found, and not surprisingly they often feature potential share price re-ratings, eclipsing many of the largest stocks that are already trading in line with their established profiles.

As you can see above (blue line), Kingston Resources (ASX:KSN) was the best performer out of Wednesday’s presenters with its shares finishing up nearly 30% by the end of the week.

It is also worth noting that management presented on Wednesday, 17 July, and following the presentation the company’s shares increased from 1.3 cents to close the week at 1.8 cents, representing a gain of nearly 40%.

PolarX Ltd (ASX:PXX) also performed strongly gaining 13%, and like White Rock it built on substantial gains leading up to the conference.

Thursday’s high of 11.5 cents represented an increase of nearly 50% in the last fortnight.

Another strong performance was that of Strandline Resources Ltd (ASX:STA) which hit 14.5 cents on Friday, representing a week on week gain of 16%.

The second day of the conference was dominated by energy, base metals and bulk materials stocks.

One of the notable performers was Cassini Resources Ltd (ASX:CZI), not surprising given its potential to be a large-scale nickel and copper producer.

The company’s shares increased from an opening price of 9.4 cents prior to management delivering its presentation to hit a high of 10.5 cents, representing a gain of 12.5%.

Aeris Resources Ltd (ASX:AIS) was another strong performer with its shares increasing from 6.4 cents at the start of the week to hit a high of 7.7 cents, representing a gain of 20%.

The company released its June quarter/annual result at the conference, noting that full-year copper production of 26,852 tonnes was ahead of guidance and that the June quarter was the best of the year with an annualised run rate of more than 29,000 tonnes and costs more than 10% lower than the average full-year costs for fiscal 2019.

Aeris also has a strong balance sheet, finishing the quarter with cash and receivables of $26.6 million, fairly robust for a company with a market capitalisation of $33 million.

Bauxite producer Metro Mining Ltd’s (ASX:MMI) increase of approximately 9% was impressive given that the company’s shares had already surged nearly 20% in the fortnight leading up to the conference.

There were some oblique reasons that undermined Metro’s share price in the lead into June 30, including tax loss selling.

The post end of financial year recovery could well be the start of a much stronger run, particularly given that the company has a strong production profile, providing earnings visibility. 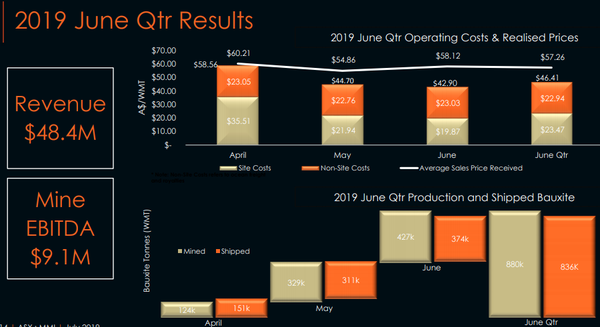 Among the energy stocks that presented, Buru Resources Ltd (ASX:BRU) had experienced some of the strongest share price activity of any of its peers leading into the conference.

This momentum continued as management geared up to present, and strong volumes were recorded on presentation day.

The company’s shares closed the week at 28 cents, up from 24.5 cents on Monday, representing a gain of 15%.

Friday was dominated by gold and copper-gold stocks, and with the strength of the commodity price and the weight of gold companies presenting one would have expected the week’s best performer to come from that sector.

However, it was First Graphene Ltd (ASX:FGR) that blitzed the field with a gain of approximately 23%.

The company has a robust manufacturing platform based upon captive supply of high-purity raw materials and an established 100 tonne/year graphene production capacity.

Gold Road Resources Ltd (ASX:GOR) was another company that came into the conference with strong share price momentum.

In the three weeks leading up to the conference the company’s shares surged from 90 cents to $1.20, an increase of 33%.

That winds up our wrap of the Noosa Conference, the home of surf, sun and deals well done.