As we move onto the last five companies of our 20 stock gold feature, the precious metal continues to trade strongly.

Furthermore, the combination of unpredictable geopolitical conditions and share market volatility should sustain demand as safe haven investors seek refuge in the commodity.

20 gold nuggets, the ingots of tomorrow Part 3: Gold and silver drive down costs of production

The five gold stocks we examine today have points of difference that make them interesting investment propositions, and indeed this has been reflected in some outstanding share price gains.

Over the last few days we have narrowed our focus in terms of examining gold prospects, in particular looking to highlight the various styles of mineralisation, including projects where both gold and silver have the potential to substantially reduce costs of primary base metal operations.

These are factors which apply to some of the stocks we examine today.

Alliance Resources Ltd’s (ASX:AGS) flagship project is the Wilcherry Project, located within the southern part of the highly prospective Gawler Craton, about 45 kilometres from Kimba in South Australia.

The company plans to drill 32 reverse circulation holes across 5.1 kilometres.

With the company already having identified intercepts such as 7 metres at 16.6 g/t gold and 3 metres at 9.8 g/t gold from 89 metres and 156 metres respectively, the upcoming exploration campaign could deliver market moving news. 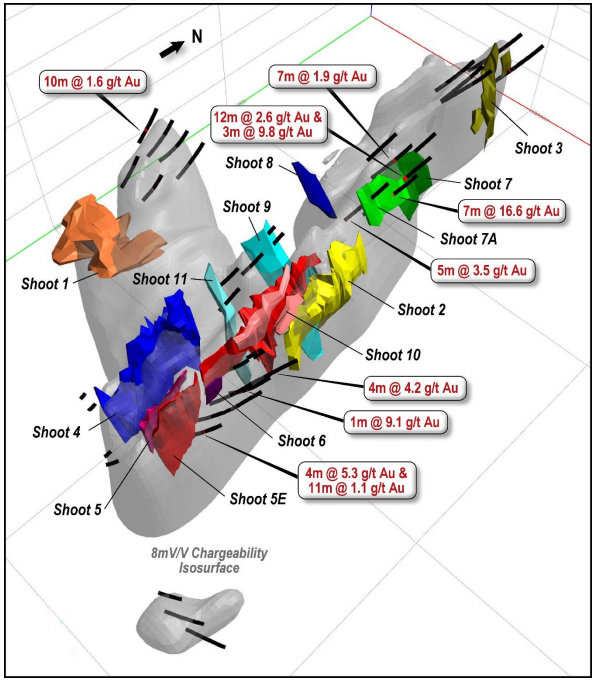 An independent scoping study is positive and supports a new 250,000 tonnes per annum gold plant at Weednanna.

This suggests that further studies into a prospective internal rate of return could be very favourable given that the value of the gold in ground at current prices is approximately $400 million.

Further, the company’s market capitalisation of $17 million doesn’t appear to capture the value of its flagship asset.

The company has recently commenced the next phase of drilling, and management is of the view that there is significant potential to increase the size of the resource as the majority of gold shoots comprising the maiden resource were open in at least one direction.

The company has really caught the eye of investors over the last month as management pressed home the significance of the high-grade gold delineated at shoots seven and eight of the Weednanna deposit.

This has been reflected in the company’s share price which is up 30% since mid-July.

EMU NL (ASX:EMU) continues to focus on its Elevado Project in exploring for world-class ore bodies in the Maricunga Belt in Chile which hosts numerous world-class gold and silver projects. 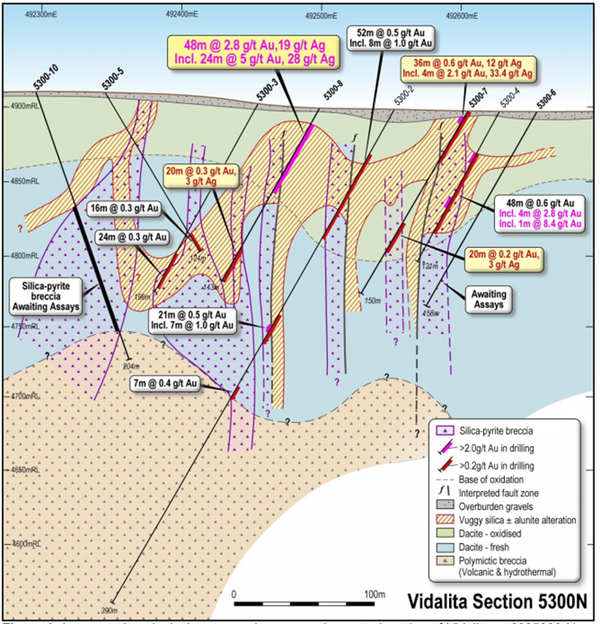 The true width of the mineralised intercept is yet to be determined, and these outstanding assay results represent the highest gold grade intersected at Vidalita.

Not surprisingly, the release of the results triggered a substantial share price rerating as the company’s shares doubled from 4.4 cents to 8.8 cents.

The intersection is very similar in grade to many drill intersections at the high grade gold-silver Salares Norte Deposit discovered by Goldfields.

It is situated 150 kilometres to the north with a current indicated SAMREC-compliant resource of 3.5 million ounces of gold at a grade of 5.2 g/t gold.

From a geological perspective, the high sulphidation epithermal style mineralisation at Salares Norte is primarily oxidised and sulphide-bearing polymictic breccias with vuggy silica clasts which are often associated with bonanza gold and silver grades.

Given the geological similarities identified at Vidalita management believes that there is excellent potential for the discovery of a high grade gold-silver deposit similar to Salares Norte.

Diamond drilling of drill-ready targets, including further drilling of the Vidalita prospect to target depth extensions of the identified mineralisation is planned to commence mid-October.

Further aircore drilling of yet to be specified targets will commence in January 2020.

EMU expects the diamond drilling at the Vidalita prospect to be completed by the end of the year, the results of which could be market moving given the group’s early stage success.

The aircore drilling will follow once diamond drilling is complete.

Greenpower surges into the gold sector

While Greenpower Energy Ltd (ASX:GPP) has been mainly focused on the battery metals sector, the exercise of an option agreement with Q-Generate Pty Ltd on Thursday has positioned the company to acquire the former producing gold mines of Camel Creek, Golden Cup and Big Rush.

These mines are situated about 200 kilometres from Townsville, and were last operated in the mid 1990’s.

The combined mines produced in excess of 150,000 ounces of gold at an average grade of over 2 g/t gold.

The Camel Creek and Golden Cup mines are adjacent to each other whilst Big Rush lies 100 kilometres to the south-west.

All of the mines ended in mineralisation when mining stopped in the 1990’s when the gold price was below US$400 per ounce.

Consequently, with the gold price now some US$1100 per ounce higher, it is quite likely that these mines will be well in the money. 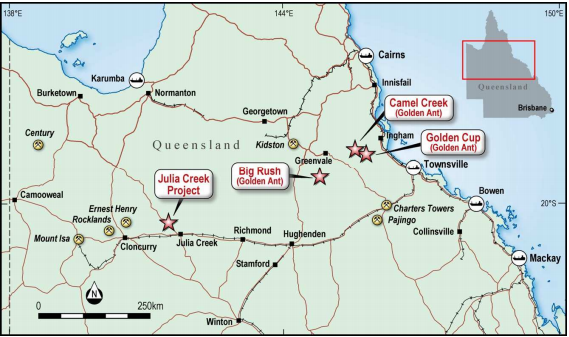 The new EPM at Big Rush covers an area of approximately 300 square kilometres.

At Camel Creek, a total of 28 open pits were historically mined over a four kilometre strike length with over one million tonnes of ore extracted for treatment via heap leaching.

The ore below the pit was sulphide bearing and as such could not be recovered by the heap leach process.

The Golden Cup Mine was a small but high-grade heap leach operation, located 15 kilometres from the Camel Creek Mine which produced approximately 18,300 ounces of gold grading 2.8 g/t.

The Big Rush Gold Mine consists of four previously mined open pits which produced about 58,000 ounces at 1.9 g/t gold.

Upcoming milestones include the completion of an interim JORC Resource, receipt of environmental approvals and the commencement of resource and extension drilling.

Meteoric Resources NL (ASX:MEI) has delivered one of the best share price performances in the microcap gold sector in 2019.

On Monday, management announced that it had raised $2.7 million through a placement of 84.3 million shares at an issue price of 3.2 cents per share.

While this represented a premium to the 30 day volume weighted average price (VWAP), unfortunately it was significantly lower than the previous day’s close of 4 cents per share.

Heavily discounted placements often place a drag on company share prices for some time after the raisings.

However, such is the confidence in Meteoric that it continued to trade as high as 4.3 cents per share in the days following the placement.

From an operational perspective, all eyes are on the company’s Novo Astro Gold Project in Brazil. 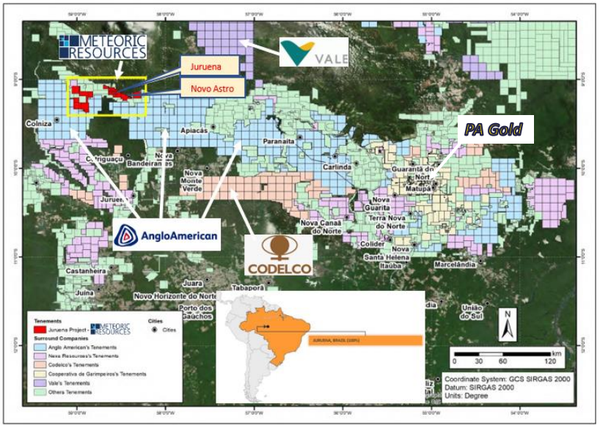 Meteoric has commenced initial work at Novo Astro, and a first pass drill program should begin in the coming weeks.

Novo Astro is a large area of more than 15 square kilometres that contains workings from the 1980s, several of which are still actively being mined.

However, despite a large soil anomaly and previous grab sampling returning grades of up to 264 g/t gold, the ground has never been drilled.

While drill results could well be market moving, management is expecting results from a sampling program in the coming days, a development that could spark further investor interest.

Sultan has 100% ownership of a portfolio of ground that is that is approximately 950 square kilometres in area and prospective for gold, nickel, cobalt and base metals.

Tenements owned by the group lie in close proximity to a number of significant recent discoveries.

While the company has four projects, the one where there has been most activity of recent times is the Challenger Prospect, Lake Grace which is 250 kilometres south-east of Perth.

During the June quarter the company received all gold assay results from its maiden RC drilling at the Challenger Prospect.

The program targeted a one kilometre long, aircore gold anomaly of more than 0.1 g/t gold defined by North Ltd in exploration programs undertaken across the area in the mid-1990s.

Sultan’s drill program was designed to confirm the extent and tenor of the surface gold mineralisation, test the depth and down-plunge extent of the higher-grade mineralised zones and provide an understanding of the stratigraphy and structure across the Challenger Prospect.

The drill holes intersected numerous thick intervals of mafic granulite rock-types containing zones of strong sulphide mineralisation, similar in appearance to those that host gold mineralisation at the nearby 675,000 ounce Tampia and 1 million ounce Katanning gold deposits (see below). 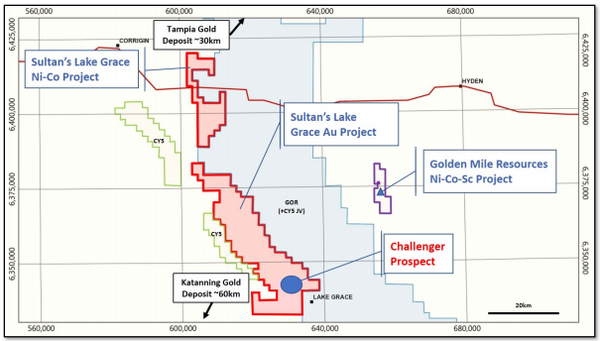 The company received the gold fire assay results from the 1 metre and composite 4 metre samples, which show a number of significant gold-mineralised intervals as shown below. 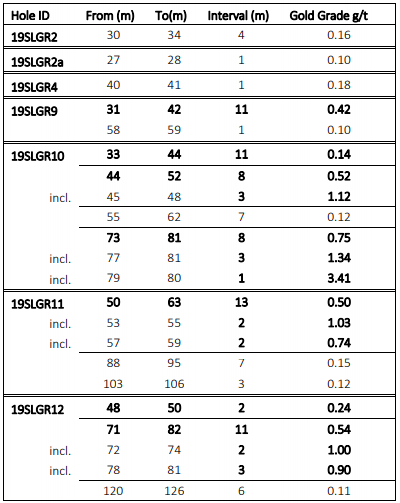 Management was encouraged by results from the first pass drilling program as they demonstrated that gold mineralising processes have occurred on a significant scale at Challenger.

The drilling intersected thick zones of gold-anomalous mafic rocks spanning intervals of up to 90 metres in excess of 20ppb gold.

Within these intervals, zones of between 8 metres and 13 metres averaging over 0.5g/t gold containing 1 metre to 3 metre zones in excess of 1g/t gold were commonly intersected.

Following this drilling program management has identified a total of 60 targets for follow-up exploration.