In January, we reported that colder weather in large LNG importing nations, combined with outages at major production hubs and congestion along global shipping routes had pushed spot prices for the commodity in Asia to the highest levels since 2014.

Natural gas prices have increased from US$2.58/MMBtu at the start of the year to nearly US$3.00 last week, and the March Nymex contract was up 5.7 cents to US$2.92/MMBtu on Friday.

Analysts at Wood Mackenzie said the frigid temperatures in the US are leading to “system strain” for natural gas pipeline operators across the country.

Amid this buoyant pricing environment, Elixir Energy (ASX:EXR) has released its work program for 2021 as it prepares to expand an already impressive resource in Mongolia where it has access to broader Asian markets.

This is a snapshot of Elixir’s acreage, existing wells and proposed wells in relation to its 2021 program. 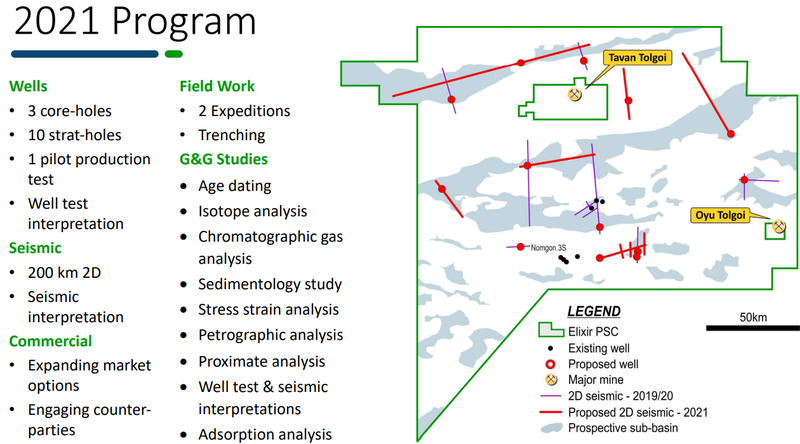 13 wells, 200 kilometres of seismic analysis and one pilot production test

Elixir is going to be extremely busy on the exploration front in 2021 as it aims to complete 13 wells, but it will also be performing some important production test work of the Nomgon sub-basin coal seams.

This will be the first test of its kind in Mongolia and it is designed to determine commerciality, fluid flow from the coal seam and the measurement of water and gas rates, while also providing some insight as to the water quality.

The test will begin in the second half of 2021, drawing on learnings from the Australian CBM industry where management has had significant success.

On the exploration front, Elixir has a wealth of options to choose from, having only drilled 1.4% of the 30,000 square kilometre licence.

The following provides an insight into the company’s proposed target areas in 2021.

Valuable data collected in 2020 to assist in exploration campaign

While management can draw on experience in other regions in terms of developing exploration strategies, there is still significant data that was collected in 2019/2020 that will assist in growing the group’s resource.

The integration of laboratory and desktop analysis of the well and seismic data acquired in 2019 and 2020 is an ongoing exercise.

The following timetable for 2021 outlines Elixir’s plans, including the staging of 13 wells between April and December. 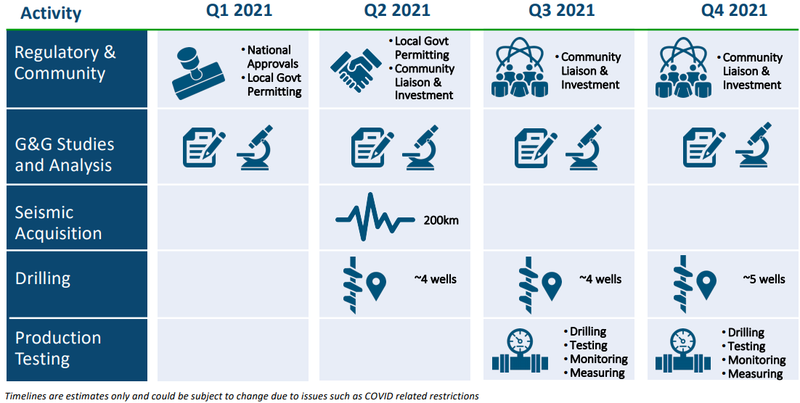 To date Elixir has proved that the coals in the sub-basin have a thickness (vertical) of up to 90 metres and gas contents of up to 10 million cubic feet per tonne.

Data relating to permeability, gas saturations and methane content has also been encouraging.

There was an impressive uptick in Elixir’s independently verified Prospective Resource (2U) with it increasing from 7.6 Tcf to 14.6 Tcf on a risked basis.

Elixir’s maiden contingent resource estimate will be focused solely on the Nomgon sub-basin with a view to supporting a local development project.

Technical analysis has identified seismic character that should be associated with coal, and this character has upgraded the prospectivity, prompting management to test the concept in 2021.

Building social license is vital for the resources business and Elixir will expand its programs in this area.

Management is currently investigating local carbon offset options for its Scope 1 and 2 emissions.

Elixir enters 2021 with cash of approximately $9 million which management expects will fully fund the work program as operations are very low cost and notably, exploring for CBM is capital efficient.

One well down, plenty to go for Elixir