Each week FinFeed will be assessing the performance of a range of stocks with market capitalisations up to $500 million based on developments in the preceding week. A range of considerations will be taken into account in terms of stock selection, including important operational developments that have emerged, share price movements or perhaps outstanding drilling results/resource increases in the case of resources companies.

The company delivered the fourth best share price gain in the $50 million to $500 million market capitalisation universe as it increased circa 28% from 98.5 cents to a close of $1.26 on Friday. As indicated in the following chart, over the last week SFH has continued to eclipse long-standing share price levels, and this could be attracting investors who follow the charts closely. The run that occurred last Friday took it above a resistance point which stretched back more than five years, and the closing price on that day was just shy of a high it hit in 2011.

On Monday, the company went on to trade as high as $1.34, an eight-year high. 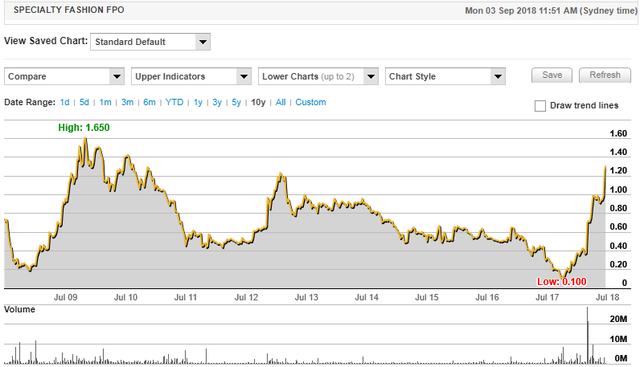 It is also worth noting the all-time record weekly trading volumes that were registered in May, indicating that the company is receiving support from both retail and institutional investors.

On this note, prominent value investor Wilson Asset Management Group emerged as a substantial shareholder with a stake of 9.1% on May 21.

Of course as with ant stock, you should seek professional financial advice if considering it for your portfolio.

It isn’t often that you see positive share price momentum, particularly to this extent, after a company has announced a loss.

However, Specialty Fashion did just that, recording a net loss of $9.3 million for fiscal 2018.

This was the only metric that shaped up poorly in its full-year result, which was better judged by the increase in underlying earnings (EBITDA) from $11.1 million to $19.9 million, which was at the upper end of management’s guidance.

Most significant though is the fact that fiscal 2018 represented a year of transition with SFH divesting perennial underperforming businesses and turning its attention to expanding the fast growing high margin City Chic brand which boasts more than 200 stores globally and a strong online presence.

Biting the bullet and selling off its Millers, Crossroads, Katies, Autograph and Rivers businesses for $31 million in cash is a company changing development.

Not only is SFH taking a forward-looking approach to reorganising its retail exposure and brand focus, but it is also honing in on the growing plus size demographic. 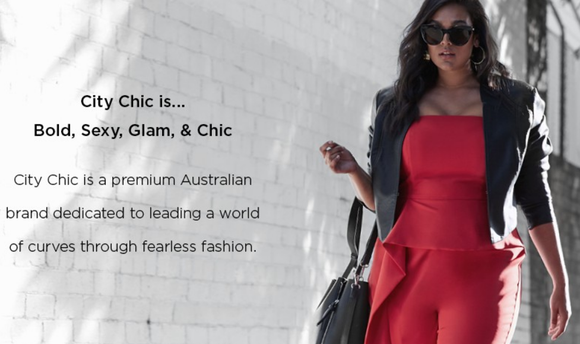 City Chic’s targeted clientele are customers seeking out fashionable and curvy apparel, a growing market, but one where supply still falls short of demand.

SFH is a much cleaner operation with management now able to focus on optimising and growing its strong performing City Chic business, and the company’s balance sheet has been strengthened considerably.

SFH has now transitioned from a net debt position of $8.3 million in fiscal 2017 to net cash of $25 million, providing it with the capacity to expand the City Chic business, both on the bricks and mortar and e-commerce fronts.

This will also include an increase in its store and online presences in the US where it is already generating income, as well as entering new markets in the Northern Hemisphere.

Regards the latter, management sees substantial scope for expansion, exemplified through the group’s successful entry into Germany via the Zalando partnership.

There is scope to generate strong growth off a fairly immature base in the US, and management is targeting new online markets in mainland Europe and the UK.

Another factor that would have attracted investors to the stock last week was management’s comments regarding a reinstatement of its dividend policy in fiscal 2019.

SFH has committed to paying franked dividends representing 50% of net profit in fiscal 2019, a decision which will see the company compare favourably with other established players in the retail space that traditionally pay dividends.

SFH not only experienced a downturn in its core brands, it was late in terms of adjusting to the fast growing e-commerce environment, resulting in the company faltering in recent years.

However, the new strategies being implemented are already seeing the e-commerce area of its business growing strongly and there now appears to be an appropriate balance between bricks and mortar retailing and e-commerce.

An overview of the City Chic fiscal 2018 result in isolation is most impressive.

Few established mainstream retailers would be able to match the comparable sales growth of 12.9%.

Gross profit margins of 59% are well above the industry average, and with the cost of doing business being reined in from 48.9% to 44.1% of sales, it would appear that the business is being efficiently managed.

Management expects sales growth across all channels in fiscal 2019 with the strongest growth expected to come from online.

While some one-off integration expenses will be evident in fiscal 2019, the focus will be on the company’s operational performance.

With a healthy balance sheet, management now has the capacity to harness growth with the stroke of a pen.

The company should be in a reasonably good position to provide financial guidance at the half-year mark, and this is another possible share price catalyst.