While coal receives more than its fair share of negative press, the fact remains that it will continue to be required well into the future to power manufacturing plants and generators that are essential in meeting the energy requirements of large cities throughout the world.

Unfortunately, there just isn’t enough green energy infrastructure in place to make a material transition to the use of environmentally friendly power sources in the near to medium-term.

While Australian thermal coal prices declined significantly over a five-year period after an extremely strong run between 2008 and 2010, the rally that has occurred since 2017 should be a key focus. 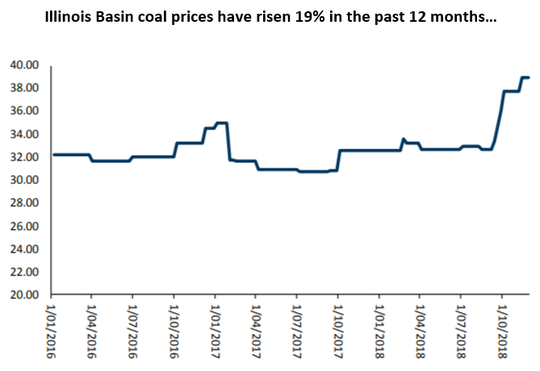 Like any commodity, coal prices are largely driven by supply and demand dynamics. Going forward, the outlook for thermal coal, which is used to provide power to homes and industries alike, appears strong.

One of the key factors to bear in mind in terms of assessing demand for thermal coal is that it is largely an essential consumer commodity, unlike coking coal which is used to create intense heat for the manufacture of metal products.

Consequently, demand is mainly driven by non-discretionary use which effectively provides price support.

The key driver in terms of price variations is the level of supply, as excess inventories provide a competitive pricing environment enabling users such as power stations to dictate pricing.

Conversely, a shortfall in inventories leaves coal producers in the box seat as they assert their position as price makers while power stations become price takers.

Our stock of the week, Paringa Resources Ltd, is well-positioned to take advantage of this shift in dynamics. Analysts see the group as being poised to secure robust prices for its thermal coal in the near to medium-term.

The Buck Creek Project includes the 2.8 million tonnes per annum Poplar Grove Mine, which commenced operations in December 2018.

Additionally, Paringa is assessing the future development of the permitted 3.8 million tonnes per annum Cypress Mine, with the opportunity to become the next major Illinois Basin coal producer.

Once the Poplar Grove Mine is constructed, Paringa has the potential to make low risk, low cost mine developments to grow its coal production to 6.6 million tonnes per annum and beyond.

Importantly, the company already has sales contracts in place which we will expand on later.

The following map of Western Kentucky shows the location of Paringa's Poplar Grove and Cypress Mines, their proximity to essential infrastructure and the extent of historical coal mining in the region. 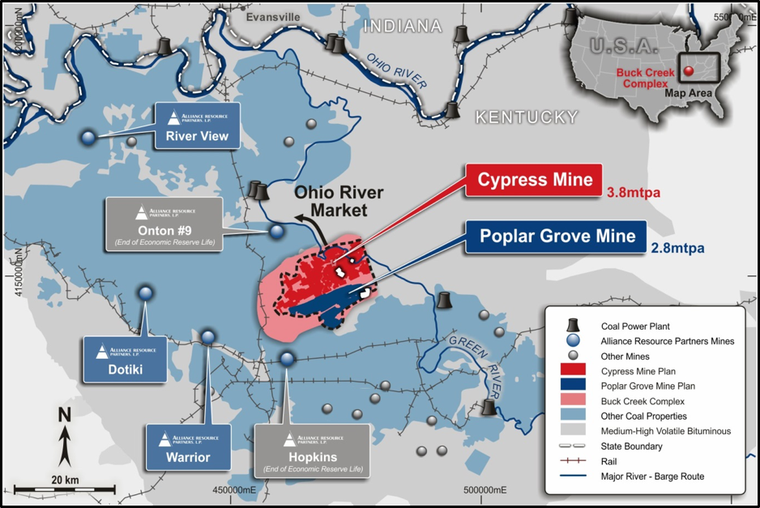 The mineral ownership of Poplar Grove and Cypress Mines is unique for the region with Paringa leasing the coal rights from each individual farmer or surface property owner where the mineral rights have not been severed from the surface property.

In other parts of the US, mineral rights to coal are generally owned by the federal government or large third party land companies, many of which severed the mineral (coal) from the surface property over one hundred years ago.

Since 2008, the previous vendor groups and Paringa have secured over 300 individual leases covering an area totalling approximately 41,000 acres.

The Poplar Grove Mine is expected to ramp up production during the 2019 calendar year, reaching near full production capacity by the end of 2020.

Paringa intends to ship thermal coal predominately by barge from its load-out facility on the Green River, leading to major coal transportation routes along the Ohio and Mississippi rivers.

Management has not yet decided on the timing to develop the Cypress Mine, which if undertaken would require additional funds.

However, with the company’s bankable feasibility study (BFS) indicating a 25 year mine life at Poplar Grove, cash flow from production should assist in funding the Cypress Mine. 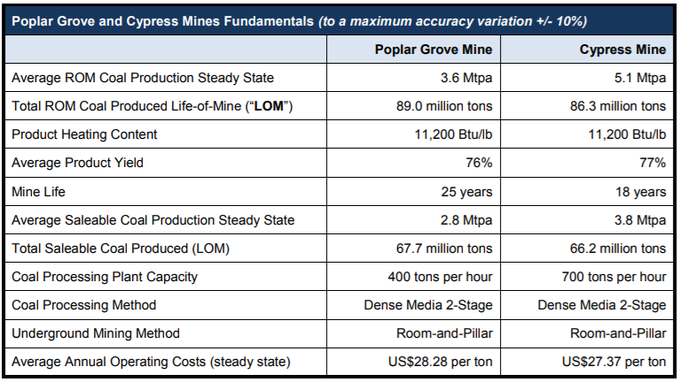 In the latter half of December, Paringa intercepted the Western Kentucky Number 9 coal seam, a material milestone towards the production of coal.

Intercepting the coal seam enables Paringa to progress to the next phase of mining activities, including bottom development which involves the linking of the slope with both the intake and exhaust air shafts to establish the mine’s permanent ventilation system.

It is also significant in the construction of critical underground infrastructure, and production of coal from bottom development will be utilised to commission the coal handling and preparation plant (CHPP).

Management also highlighted in December that several factors were creating significant upward pressure on Illinois Coal Basin (ILB) coal prices with evidence that local utilities are rapidly moving to secure 2019 and 2020 coal supply, incentivising higher pricing and longer-term contracts than have been seen in the region for some time.

In recent months, strong market fundaments have prevailed in the ILB, particularly regarding the price of natural gas, the main competing fuel source for power generation.

Working gas stocks in underground storage are currently materially below the minimum 5-year range, and in November natural gas prices surged as much as 50% as cold weather in the US raised concerns about supply shortages given the lack of available inventory, with Henry Hub pricing reaching a high of $4.93/mbtu (millions of British thermal units).

The US peak body for energy data, Energy Information Administration (EIA) noted that the natural gas storage stocks ended the refills season (October 31, 2018) at their lowest level in 13 years.

Paringa also noted in December that high international coal pricing had led to a shift in coal sales from domestic consumption to export, from less than 18 million tonnes of net exports from the US in 2016 to potentially around 55 million tonnes in 2018.

With less coal available domestically in the US, coal stockpiles have continued to fall.

Materials handling infrastructure at the mine site is operational, enabling the transfer of run of mine coal from the mine site to the CHPP.

The Ainsworth dock on the Green River is also structurally complete and will be ready to receive the first coal processed by the CHPP this month leaving Paringa well-placed to take advantage of the buoyant pricing environment.

Importantly, Paringa has long-term forward sales agreements in place, providing the company with predictability of income and earnings visibility.

In October 2015, Paringa signed a coal sales agreement with Louisville Gas and Electric Company (LG&E) and Kentucky Utilities (KU) to deliver coal from the Cypress Mine.

These entities are subsidiaries of the US$25 billion multinational energy group PPL Corporation (NYSE:PPL) family of companies, and they are regulated utilities that serve a total of 1.2 million customers.

In February 2016, the company decided to develop the low capex Poplar Grove Mine first following exceptional results from the scoping study.

As a result, the amended coal sales agreement with LG&E and KU now reflects delivery of coal from the Poplar Grove Mine as indicated below.

Under the amended coal sales agreement, Paringa is contracted to deliver a total of 4.75 million tons of its 11,200 btu/lb product over a five-year period.

The amended contracted fixed coal sales prices for Paringa's 11,200 btu/lb coal specification begins at US$40.50 per tonne for the first 750,000 tonnes of coal delivered to LG&E and KU, increasing to US$45.75 per tonne for the final one million tonnes sold.

The Poplar Grove and Cypress Mines' access to the Green and Ohio river systems provides a significant transportation advantage over other Illinois Basin coal producers.

The LG&E and KU coal sales agreement calls for fixed sales prices based on a free on board (FOB) basis delivered at the Buck Creek barge load-out facility on the Green River.

This means that the buyer takes delivery of goods being shipped to it once the goods leave the suppliers shipping dock, meeting costs such as marine freight, insurance and unloading costs.

The Trimble County power plant on the Ohio River is pictured below.

OVEC-IKEC own two generating stations located in Ohio and Indiana, with a combined electric production capability of approximately 2,256 megawatts.

OVEC-IKEC is owned by several investor-owned utilities or utility holding companies, with the largest shareholder being American Electric Power (NYSE:AEP), one of the largest electric utilities in the US, delivering electricity to nearly 5.4 million customers across 11 states.

AEP is also one of the largest electricity producers in the US with approximately 33,000 megawatts of generating capacity.

Consequently, it is beneficial for Paringa to establish an indirect relationship with AEP given its substantial demand for thermal coal.

Analysts from Argonaut Equity Research recently visited Paringa’s Poplar Grove project, and in a report released in December which reflected on the favourable pricing environment, the broker attributed a buy recommendation to the stock with a share price target of 80 cents.

Having cited issues such as low thermal coal inventories, significantly higher drawdowns between August and September, a year-on-year 30% increase in coal exports, a spike in natural gas prices and an El Niño weather pattern that should result in colder than normal weather conditions in 2019, Argonaut analyst Matthew Keane indicated that Paringa should be a beneficiary of ideal pricing conditions.

He said, “These factors are creating a favourable environment for coal pricing and subsequently Illinois Basin coal prices have risen 19% over the past 12 months.

“We believe this will create a prime opportunity for Paringa to lock in further sales contracts, particularly if further inventory depletion brings some utilities into the market before the usual spring contracting period.”

However, even as things currently stand, Keane highlighted Paringa’s favourable position with 5.4 million tonnes already contracted between 2019 and 2022.

As can be seen from Argonaut’s projections below, strong and sustainable earnings should be achieved between 2020 and 2023 inclusive with the potential for the Cypress Project to create a step change in fiscal 2024 production while costs should be relatively static in the vicinity of US$30 per tonne.

This provides the company with solid margins and particularly strong leverage to an increase in the thermal coal price if that comes to pass.