Infomedia Ltd (ASX:IFM) is our stock of the week. Uncharacteristically, however, we haven’t targeted a company which has had a hike in its share price or business-transforming developments – in fact, its share price has fallen significantly in the last month.

Infomedia is a stock that has consistently outperformed, and with many compelling investment metrics, it appears undervalued following a share price retracement from a 16-year high of $1.39 in September to $1.03 on October 25.

The $346 million-capped company is a technology services developer and supplier of Electronic Parts Catalogue (EPC) and service systems to the global automotive industry. It also provides information management and analysis for the Australian automotive and oil industries.

Infomedia has led innovation in service infrastructure within global automotive distribution networks for more than 25 years and continues to expand its reach within the three regions in which it operates.

A high-growth business with acceleration prospects

Though the company’s shares have recovered some of the lost ground, it continues to trade at a discount to the 12 month census price target of $1.30.

With a traditionally conservative management team recently flagging the prospect of acquisitions which would boost its already strong growth profile, there could be catalysts around the corner.

While IFM is priced for growth, trading on a 2019 PE multiple of 22.4, consensus forecasts support the robust multiple, implying compound annual earnings per share growth of nearly 25% out to 2020.

It is also worth noting that the fiscal 2019 industry average PE multiple for the IT software and services sub-group is 32, reflecting the strong growth that can be generated in a sector that traditionally commands high margins for its products and services.

Consequently, should the company acquire earnings accretive businesses, its share price is likely to move in line with its strengthened growth profile.

In the interim, investors are buying a proven management team, sturdy business model and industry-leading technology, wherein the company is ranked by analysts at Bell Potter as being in the top three globally.

Buying companies that are exhibiting share price weakness can be dangerous, and bottom-fishers often get caught misinterpreting what they believe is a recovery point only to be disappointed by further share price depreciation.

This is often the case with companies that provide a watered-down version of what should have been an unfettered cautionary statement regarding their prospects.

When the company has to come clean, the original nominal share price decline increases exponentially as management loses credibility and extreme uncertainty stands in the way of any investor interest.

Importantly, however, we have established that this isn’t the case with Infomedia – the recent retracement doesn’t appear to be the thin edge of the wedge.

Having delivered an outstanding 2018 result and flagged further growth in 2019, there hasn’t been a hint of any negative news.

The most likely trigger was the downturn in broader equity markets that occurred in October, particularly bearing in mind that tech stocks were hit hard during this period.

The chart below shows the correlation between Infomedia’s share price decline (yellow line) and that of the S&P/ASX 200 Information Technology index (ASX:XIJ): 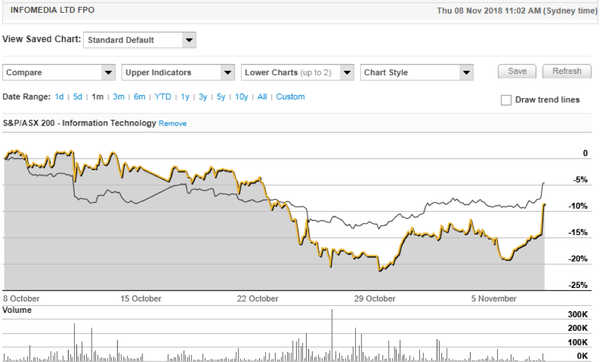 In bearish market conditions, it is quite likely that some of the selling could be attributed to profit-taking after the company’s shares spiked 40% on the back of an impressive fiscal 2018 result released on August 15.

It is worth noting that just in the last few days, Infomedia has nearly recovered enough to bring it in line with the XIJ index after uncharacteristically falling below the trendline over the last fortnight.

Also of interest was the emergence of the $2.6 billion Pendal Group (ASX:PDL), formerly BT Investment Management Ltd, as a substantial shareholder on October 26.

Since then, the company’s shares have rallied 15%.

The following five-year chart illustrates the company’s record of outperforming the index even during periods of more measured share price accretion. It also shows (2014-15) that it can trade quite aggressively on the back of strong operational performances. 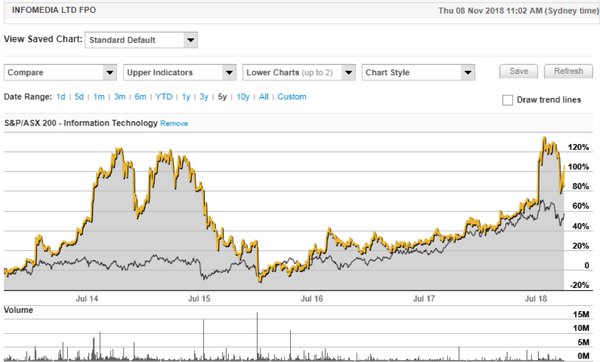 This aggressive share price performance was evident after the company delivered its 2018 result, and examining the underlying performance and gaining an understanding of the company’s business arguably provides the most compelling rationale for potential investors.

The company generated a net profit of $12.9 million from revenues of $72.9 million, demonstrating the high margin nature of its business:

Earnings per share of 4.16 cents were broadly in line with consensus forecasts.

A final dividend of 1.7 cents was declared, bringing the full year dividend to 3.1 cents, also in line with projections.

With the fiscal 2018 result broadly in line with expectations, it would appear that management’s fiscal 2019 guidance largely contributed to the strong share price rally.

Infomedia continues to report cash EBITDA as a key performance measure to identify the cash impact of investing in development costs that are capitalised in reported net profit after tax.

Consequently, in crunching the numbers for both 2018 and 2019, this should be the key area of focus.

As previously flagged by management, investing for long-term growth impacted cash EBITDA in fiscal 2018, with the company reporting $10.5 million compared to $11.7 million in the prior year.

Investment uplift related to the pre-revenue development for parts and service contracts secured in the previous financial year.

Infomedia anticipates a substantial increase in cash EBITDA in fiscal 2019 through strong top-line growth and disciplined cost management, as well as a marked uptick in recurring revenue which provides earnings visibility.

Bell Potter is forecasting EBITDA to increase from $29.1 million to $36.3 million.

Infomedia’s financial position remains robust as it is debt free with cash and cash equivalents of $13.3 million, reflecting the strong cash generation that is characteristic of the business.

Confidence in fiscal 2019 is underpinned by an increase in recurring revenue from contracts won in prior periods and disciplined cost management.

As managing director, Jonathan Rubinsztein, noted at the recent Annual General Meeting, the company is also exploring acquisitions that are close to its core business and value-adding.

It intends to pursue opportunities that provide an entry into new markets, access to new customers, or innovation to its existing parts and service software solutions.

As mentioned, this could well be the key to the next growth leg, particularly given the company’s strong balance sheet position, where it would only be in the case of a very large acquisition that management would have to undertake an earnings per share dilutive capital raising.

A strong presence in 186 countries

Another aspect for prospective investors to take into account is IFM's high-profile industry position in terms of its ranking, long-term client relationships, and proven ability to stay ahead of the curve in the development of new technologies.

Infomedia is one of three dominant global players in the global automotive Electronic Parts Catalogue, or EPC business.

As mentioned earlier, the company has led innovation in service infrastructure within global automotive distribution networks for more than 25 years, and continues to expand its reach within the three regions in which it operates: Asia-Pacific, the Americas, and EMEA (Europe, the Middle East and Africa).

These incorporate 186 countries where it services best-of-breed automotive manufacturers such as Bentley, Aston Martin, Audi, BMW, Ferrari and Chevrolet.

The company’s clients also include traditional manufacturers such as Ford, General Motors, Chrysler and Fiat.

This diversification by geography and client base, along with the long-term contracts and associated recurring revenues, provide IFM with earnings visibility.