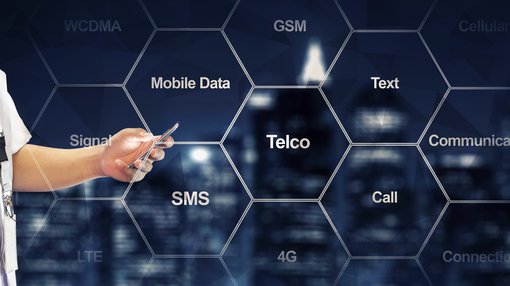 It was just this week that analysts at Bell Potter ran the ruler across diversified telecommunications company Uniti Group (ASX:UWL), making earnings upgrades and increasing their price target to $2.25 following the $532 million acquisition of Opticomm, a transaction that will drive substantial growth in the near to medium-term.

Uniti’s share price traded strongly during late-April and throughout May to hit a high of $1.72, but when the Dow plunged more than 1800 points last week it retraced to $1.54.

While the share price recovery that occurred this week can be in part attributed to a recovery in equities markets, it was the game changing acquisition that should be the focus when assessing the company’s growth profile, scope for further expansion and underlying valuation.

As a backdrop, Opticomm is one of the largest private providers of telecommunications infrastructure networks in Australia, and the group is expected to generate revenues of $70 million in fiscal 2020.

Importantly, it is a high margin business, underlined by EBITDA projections of $38.7 million in fiscal 2020.

One of the other key benefits of Opticomm is the earnings predictability that it brings to the group because of the significant proportion of recurring revenue. 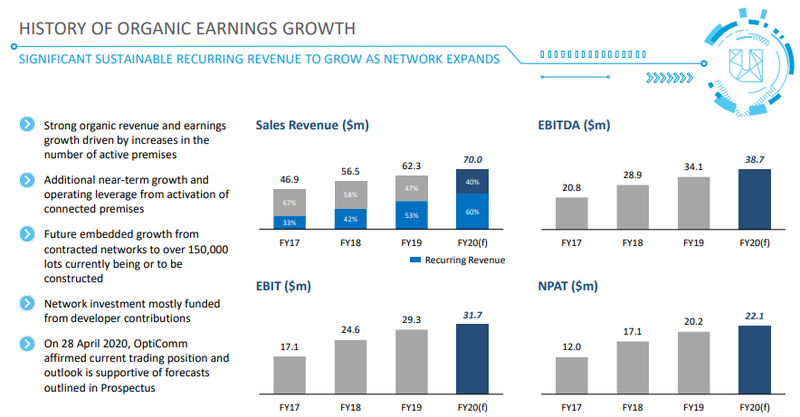 Management estimates that the acquisition will be immediately earnings per share accretive to the tune of 23% with increasing incremental growth to occur as synergies are realised.

However, it is one thing to make projections regarding anticipated synergies, but another to actually realise these expectations in the form of increased revenues and earnings.

The good news for Uniti is that the company already has established a track record of successfully integrating acquisitions, but arguably of more importance, it has high profile executives including managing director Michael Simmons who has taken other ASX listed telcos down this path before.

Simmons has nearly 40 years of experience in the media and telecommunications industry as a CEO, Director or CFO over this period.

TPG, M2 and Vocus all delivered outstanding shareholder returns on the back of growth by acquisitions.

The following chart shows the outstanding share price performance of TPG Telecom (ASX:TPM) that was largely attributed to the substantial earnings growth that stemmed from acquisitions during the period. 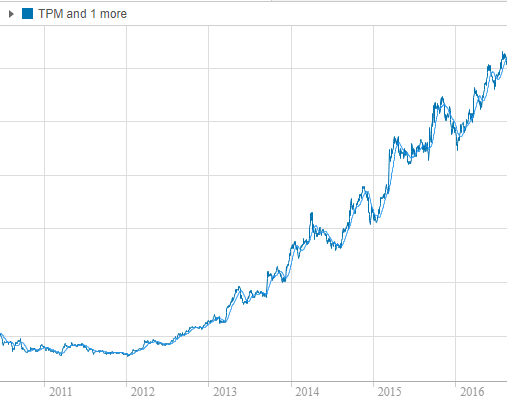 As M2 acquired approximately 20 companies over the course of 15 years, it transitioned from a mere minnow to a group valued at about $1.3 billion, and another Uniti executive in Vaughan Bowen played an active role in the process.

Bowen has held various directorships over the past 10 years, was the founder of M2 Group Limited, previously chairman of Vocus Group Limited and is currently the chairman of the Telco Together Foundation.

While M2 was acquired by Vocus, the following historical share price chart shows its strong acquisition led performance between 2006 and 2016 with the last leg up being its response to the Vocus takeover. 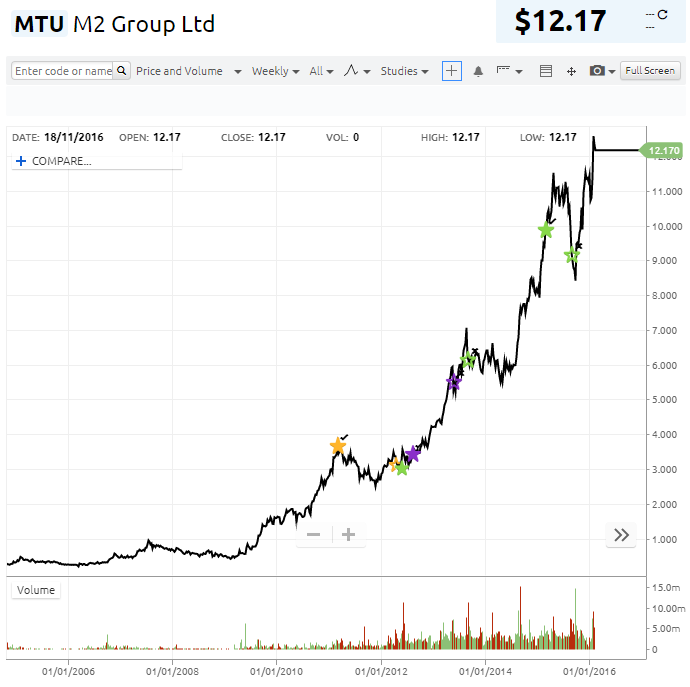 Bowen joined Uniti Group Limited in the role of Executive Director in March 2019 to lead the company's mergers and acquisitions activities.

Before examining the operational benefits of the Opticomm transaction, it is worth noting the performance of the broader S&P/ASX 200 Communication Services index (XTJ) throughout the recent period of volatility.

With communications services being of an essential nature, the sector has historically been a defensive area to park your money.

This is still the case, as evidenced by the following chart (as at 16/06/20 - date Opticomm acquisition announced), which shows the degree of outperformance by the XTJ (blue line) over the last six months, but more importantly the significantly shallower trough at the bottom of the downturn demonstrates the sector’s resilience and stability.

The group is a national provider of fibre-to-the-premises telecommunications networks to new residential, commercial and retail developments.

It has a particularly strong competitive position in greenfield sites, and management has made good progress in targeting markets such as retirement living and community precincts.

With growing demand for high-speed Internet connectivity, the company’s products and services should be highly sought after, and there is a legislative requirement for fixed line fibre telecommunications infrastructure to be made available in new housing developments, effectively providing regulatory support.

While we already emphasised the importance of Opticomm’s business model in terms of earnings visibility from its established businesses, it is also worth noting the growth transparency that is evident when considering that it has a current combined order book of nearly 190,000 contracted lots for future delivery.

Opticomm has 39 retail service providers on its network, as well as long-term relationships with developers.

The company’s success in expanding its presence, particularly on the eastern seaboard is demonstrated below. 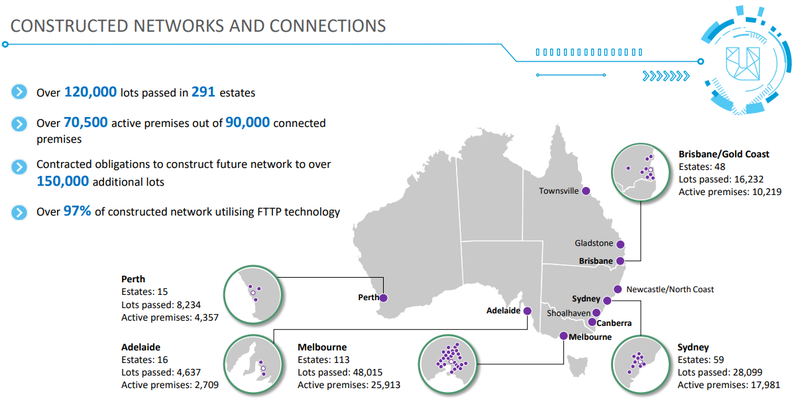 A small company that sends the big guys packing Apollo launch delayed rather than derailed Keys to the Kingdom - all this for $4 million? Right time, right place for stock of the week IPH as tech stocks soar