Earlier this week Finfeed ran the ruler across three stocks that provide engineering and construction services, stressing the benefits of diversification in terms of industries and clients serviced.

Decmil Group Ltd (ASX:DCG) offers a diversified range of services to the Australian and New Zealand resources and infrastructure industries, and it continues to broaden its areas of expertise, making it our Stock of the Week.

The company’s divisions specialise in civil engineering and construction, accommodation services and maintenance.

Demonstrating the extent of its diversification, just yesterday the company was awarded a $72 million contract for the balance of plant works undertaken at the Warradarge Wind Farm in Western Australia.

The contract will be with leading global wind energy group Vestas, with the project located 200 kilometres south of Geraldton in Western Australia.

Decmil is carving out a niche for itself in the renewable energy space having been awarded a $277 million solar contract for Sunraysia which will be one of Australia’s largest solar farms. 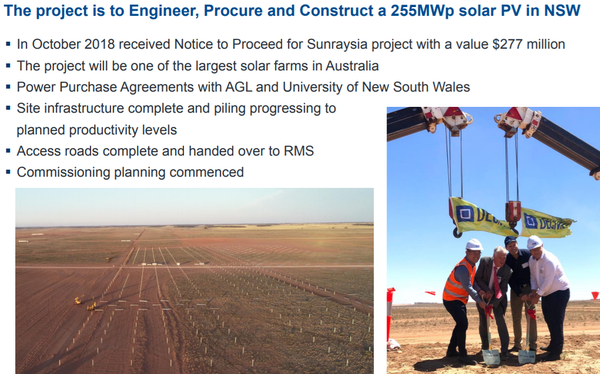 Power Purchase Agreements in relation to the project have already been negotiated with AGL and the University of New South Wales.

Decmil looks like it could be in the early stages of a substantial comeback.

If you look at the following 12 month chart you will notice that the company made its most decided break above the trendline at the start of February as it pushed up to levels of approximately 80 cents.

The fact that it has gone on to consolidate this position and even trade as high as 92.5 cents last Thursday following the release of its interim result for the six months to December 31, 2018 suggests that it may be in for a sustained recovery.

Analysts at Argonaut believe there is further upside to come, having recently increased their price target from $1.10 to $1.20 in response to the group’s interim result released last Thursday.

The broker noted on Thursday morning that Decmil had been awarded an ‘early works package’ in relation to the construction of the Mordialloc Freeway Victoria.

While the value of this contract was $25 million, the company has a strong track record when it comes to contract extensions and renewals, and with this being a $375 million project there is scope for further involvement.

Decmil has also been awarded important new transport infrastructure construction work, including an $86 million project with the Major Road Project Authority in relation to the design and construction of the Drysdale Bypass in Victoria.

Analysts at Hartleys are bullish on Decmil, attributing a 12 month price target of $1.33 to the stock. Of course this, and any broker price target, is speculative and may not come to bear.

The recent share price strength can also be attributed to the group’s positive outlook, referenced in management’s upbeat guidance in late November that included the following comments by managing director, Scott Criddle:

“We are currently exposed to a strong tender pipeline with continued focus on the Resources, Infrastructure and Renewable Energy sectors across Australia and New Zealand.

“These sectors are experiencing strong market conditions and accordingly our pipeline extends revenue visibility to FY20 and FY21.

“Consistent with this, our outlook is strong, with FY19 revenue now expected to exceed $600 million.

“The group continues to see strong market conditions across a number of its key sectors.”

Highly regarded institutional investment house, Thorney International topped up its holding during the capital raising, increasing its stake from 9% to 10.2%.

Thorney is traditionally a conservative investment group, strongly focused on finding value in stocks that are under-priced.

Given the placement price was 80 cents per share, it is fair to say Thorney would be expecting substantially more upside from current trading levels.

Decmil’s interim result featured a near doubling of revenues to $276 million with underlying earnings from continuing operations of $9.3 million, up from $1.3 million in the previous corresponding period.

The company is generating robust cash flow, and had net cash of $95 million as at December 31, 2018.

This is important for companies in the engineering and construction sector as it enables them to bid for high-value projects.

As the company gets into its stride it may well return to its past strategy of paying stronger dividends than are generally available in the sector.

Management reaffirmed its revenue outlook in February with approximately $650 million of committed revenue for fiscal 2019 and more than $400 million of work in hand in fiscal 2020.

Decmil offers geographical diversification through its New Zealand business which has been involved in the construction of a NZ$185 million Corrections Project.

The following shows the fairly even distribution of revenue by sector and geography. 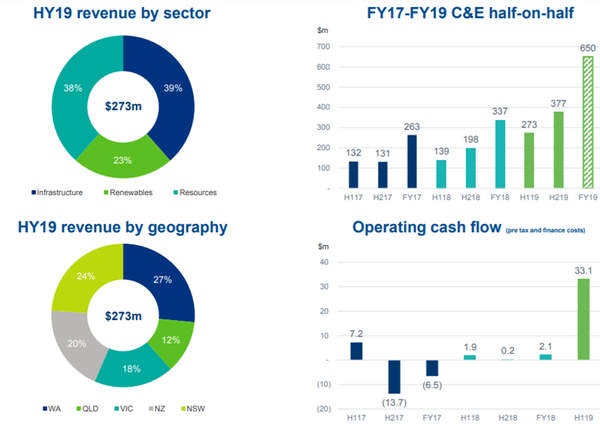