Stock of the week: Company acquisition leads one ASX stock to new highs

Finfeed’s stock of the week is benefiting greatly after delivering some extremely promising news in relation to first-quarter trading and an acquisition.

The group is benefiting from activity in the electrical, power and infrastructure industry segments, but it also has exposure to other areas which provides earnings diversification and assists in insulating it from industry specific cyclical trends.

This isn’t a stock that tends to peak and dip as newsflow fluctuates, as it has an impressive record of generating strong revenues and earnings.

Of course as with any stock, continued success is not guaranteed so investors should seek professional financial advice if considering this stock for their portfolio.

A quality fiscal 2018 result announced on August 13 triggered a share price increase of circa 15%. The company started this week trading at 28 cents and went on to hit a high of 36 cents on Tuesday, representing a gain of nearly 30%. Demonstrating its sustained strong performance over the last 12 months is the fact that its shares are now up approximately 80% on a year-on-year basis. It is also worth noting this week’s comparatively high trading volumes in the following chart which shows its share price performance since listing on the ASX in 2004. 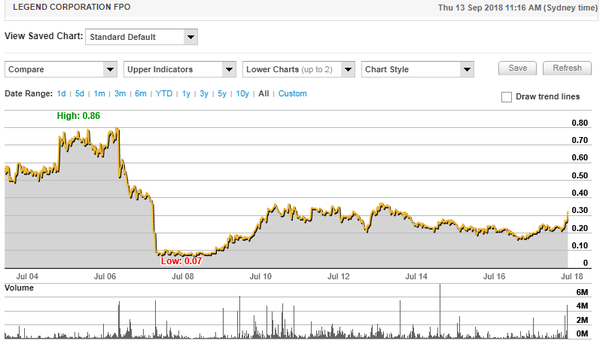 It could be argued that Legend Corporation Ltd (ASX:LGD) is just getting into gear, particularly with the added benefit of a full year contribution from the January acquisition of Celemetrix (CLX). 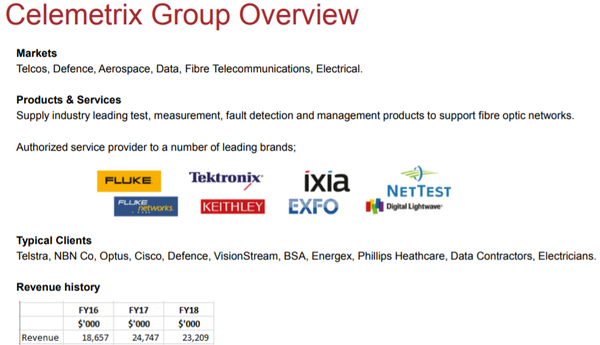 Also on the acquisition front, Legend announced this week that it had acquired PCWI International effective from August 1, 2018.

PCWI has similarities to CLX as it is a manufacturer, distributor and exporter of specialised test and measurement equipment used in gas, oil and medical applications.

With activity in the oil and gas sector heating up in response to a buoyant commodity price environment, the timing of the acquisition of PCWI couldn’t be better.

EBITDA up 70% in first two months

In what could be a sign of things to come in fiscal 2019, management advised on Wednesday that the company had experienced strong trading conditions for the first two months of fiscal 2019.

The fact that this performance was achieved on increased revenue of 28% highlights the improved margins being realised across the company’s operations.

Excluding the results of the recently acquired business, EDITDA is up approximately 60% on a like for like basis, indicating that the group’s established businesses are performing well and from an overall perspective delivering organic growth.

While a detailed trading update will be provided at the Annual General Meeting on October 26, 2018, it is worth looking at a snapshot of the Legend’s fiscal 2018 performance, as this indicates that the company isn’t just recovering off a low base, but building on an already strong platform.

Also note the steady growth that has been delivered over the last four years. 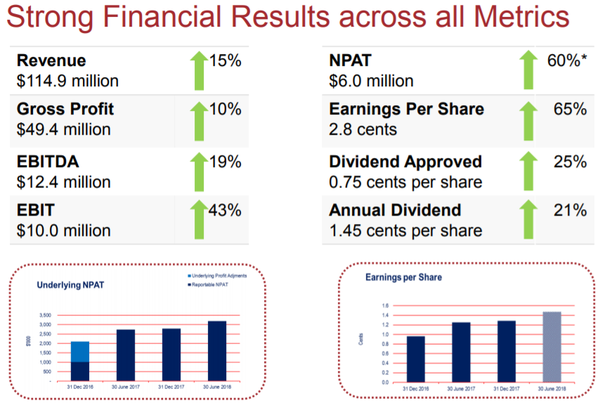 “PCWI opens new channels into gas, oil and medical markets for our product range and engineering capabilities in both domestic and export markets.”

As well as the areas already mentioned, Legend has established positions in essential services such as transport and telecommunications, industry segments which will continue to offer new work as they are linked to population growth.

Also assisting Legend in achieving robust margins is its focus on innovation where it reaps the benefits of product development rather than simply on-selling third-party products.

The company has 21 patents and 32 registered designs.

While 2018 marks Legend’s 14th year as a listed entity, it is worth noting that the company has been in business servicing a long established client base since 1962.

Legend has operations throughout Australia, New Zealand, the Pacific Region and exports to China and the US.

The company continues to increase its proportion of recurring revenues relative to overall income, providing earnings visibility and predictability.

Potential for PE based uptick in valuation

While direct peer comparisons can’t be made, there are many similarities between Legend and Southern Cross Electrical Engineering (ASX:SXE).

SXE trades on a fiscal 2018 PE multiple of 14.6, but recent valuation metrics applied by Ian Christie from Argonaut indicated that a multiple of 17.8 was warranted.

By comparison, Legend’s opening share price of 32.5 cents on Thursday implies a multiple of 11.7. If the company were to trade in line with SXE based on its current multiple, this would imply a share price of 41 cents, indicating upside of 25%. Further, if Argonaut’s implied multiple for SXE was attributed to Legend, this would reflect a share price of 50 cents.

The company’s fiscal 2018 performance, along with early indications of substantial growth in fiscal 2019 tend to support a higher PE multiple, and now that the company is well and truly on the radar a PE based rerating could see the company sustain its recent strong share price performance.