Black is back as coal stocks surge

Before Finfeed gets into the nitty-gritty of analysing this week’s stock of the week we need to provide some background as it operates in an industry that could best be described as misunderstood.

We also look at the performance of some of its peers because as a smaller stock that appears significantly undervalued this will provide some points of comparison.

With all the talk of environmentally friendly generation and storage of energy, as well as the substantial increase in demand for metal such as lithium, cobalt and or recently vanadium, coal has taken a back seat.

In fact, in some quarters it is a dirty word because of its extensively reported detrimental effects on the environment.

However, it is a fact of life that for many decades to come there will be a robust demand for the metal.

The International Energy Agency (IEA) is arguably the most reliable global independent source of data regarding energy supply and demand, both current and projected.

It is forecasting coal demand to increase out to at least 2040 assuming all countries meet their Nationally Determined Contributions (NDC) with regards to building energy efficiencies.

The agency is projecting coal demand to increase from current levels of about 5.3 megatons of coal equivalent (MTCE) to 5.6 MTCE in 2040.

These are the dynamics that the IEA sees as shaping energy supply and usage over the next 20 years. 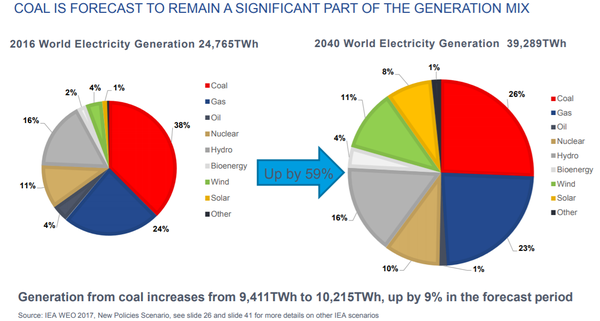 Granted, there has been strong support for vanadium recently, and even though cobalt and lithium have pulled back from the extremely high levels reached in the last 12 months, they are still trading at significant premiums to long-term trends.

While the above graphic supports the argument that there will be ongoing demand for these metals, it would be folly to ignore coal stocks as a potential investment.

This is particularly the case with Australian coal stocks given that the increase in demand projected by the IEA represents 1.5 times our current thermal coal exports to the seaborne market.

It would appear that there has been recognition of their investment profile in the last 12 months with some strong performances from companies exposed to the industry.

However, while you can gain exposure to coal through investments in diversified mining groups, there are few pure coal plays listed on the ASX.

Arguably, the most prominent is Whitehaven Coal (ASX:WHC) with a market capitalisation of approximately $5 billion.

Interestingly, you only have to step back to 2016 when the company’s share price was 33 cents and its market capitalisation was less than $400 million to see what a toll the emergence of new age metals had on coal companies.

Granted, there was a period of depressed coal prices but the underperformance of companies such as Whitehaven which generates all of its income from coal was exaggerated by the fact that many viewed the industry as being on its last legs.

A 17-fold share price rerating occurred between the first half of 2016 and mid-2018 when the company’s shares hit a high of $5.80, putting paid to that assumption.

But our stock of the week isn’t Whitehaven Coal, it is much smaller in size with a market capitalisation of just over $200 million.

That said, it punches well above its weight as a prominent producer with a growing production profile and assets that offer long life mines.

Another important aspect is that the company is on the verge of substantially increasing its production of coking coal, a commodity that fetches substantially higher prices than thermal coal.

This week’s stock of the week is Stanmore Coal Ltd (ASX:SMR)

As you can see below, despite a recent share price retracement the company has still managed to outperform Whitehaven Coal on a 12 month basis, putting a gap between it and its much larger peer in mid-2018 and maintaining that premium even as volatility rocked global equities markets. 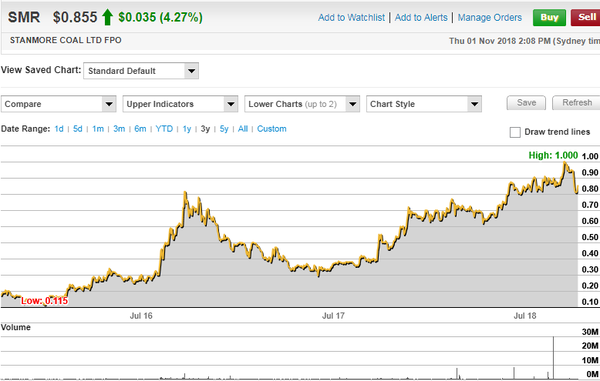 While Stanmore’s share price has had an outstanding run over the last 12 months with its October high of $1.00 representing a year-on-year gain of 150% at that stage, it is far from an overnight sensation.

A highly experienced management team has been shaping its progress since the company acquired the Isaac Plains coal mine and associated infrastructure from Vale S.A. and Sumitomo Corporation for an absolute song.

Isaac Plains is located approximately seven kilometres to the east of Moranbah in Central Queensland.

Open-cut coal mining within Mining Lease (ML) 70342 commenced in 2006 with production continuing until late 2014 when the mine was placed under care and maintenance.

At peak production the mine produced around 2.8Mtpa of export coal, comprising coking, PCI and thermal coal types.

The coal was sold to a number of the major steel makers within Asia including Japan, South Korea and Taiwan.

The major assets included in the purchase price were a dragline, a coal handling, preparation and processing facility with a nameplate speed rate of 500 tonnes per hour, dedicated train loadout and rail spur facilities which connected to the Goonyella rail system. 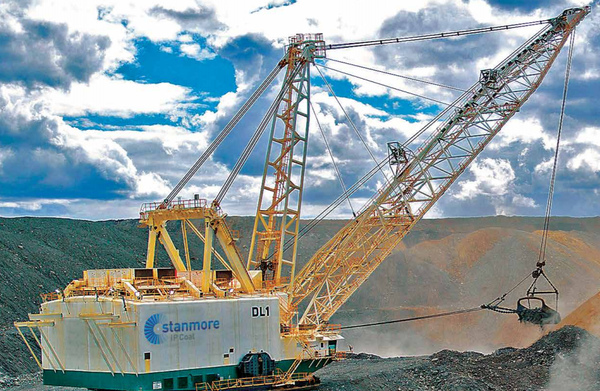 Stanmore’s main obligation was to take responsibility for the $32 million rehabilitation obligation associated with the mine, a liability that was cash backed and reduced overtime as activities were undertaken.

The area around Isaac Plains is a prime coking coal region within the Bowen Basin, with a number of nearby operating mines and development assets.

Step forward less than three years and you find a company that delivered an outstanding fiscal 2018 result by all measures, and what’s more is poised to better that performance in fiscal 2019.

Stanmore Coal’s revenue from operations totalled a record $208.1 million, up 51% from the 2017 financial year, producing a gross profit of $52.3 million, which was an increase of 55% from the prior year.

The underlying Earnings Before Interest, Tax, Depreciation and Amortisation improved by 70% to $45.6 million.

Analysts at Argonaut recently noted that the company trades at a cheap enterprise value/EBITDA multiple of two, applying its projected fiscal 2019 EBITDA of $90 million, a forecast that it sees as conservative.

Stanmore is its key pick in the coal sector given its growing production and increasing margins, metrics that are backed up by the company’s September quarter annualised production of 2.7 million tonnes per annum. 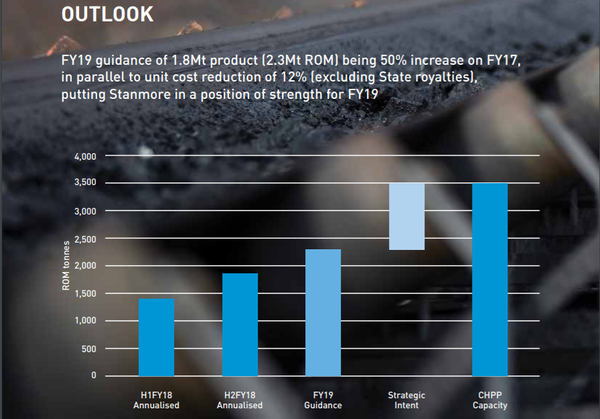 Just as encouraging are the initial yields from this new source with a higher than expected (80%) ratio of metallurgical to thermal coal, with the former attracting substantially higher prices.

This increased skew in coking coal versus thermal coal should continue as new mines come on stream.

Harking back to the company’s financial performance, cash flow generation from operations was $21.9 million, providing the company with the capacity to declare a maiden dividend of 2 cents per share.

It is also worth noting that the company is debt free.

As well as being well on track to deliver a 50% increase in production over the next 12 months, Stanmore has an improving cost structure, a runway of 15+ years of mine life and all the major infrastructure in place.

Not only is the company now placed to perform throughout the commodity cycle, but its operations are capital light and well positioned in premium metallurgical coal with a strong pipeline ahead as the existing infrastructure is pushed to full capacity.

The following demonstrates the range of options open to Stanmore in terms of growing production.