Banking Waterloo may be the time to buy

The Royal Commission into Misconduct in the Banking, Superannuation and Financial Services Industry has taken its toll on most stocks in the finance space.

This is evidenced by the performance of the S&P/ASX 200 index (XFJ), which first started to react to the potential impact of such an enquiry back in mid-2017.

The index fell from a near all-time high of approximately 7200 points to a recent low of 5600 points, representing a decline of nearly 25%.

The following three-year chart illustrates this decline (yellow line), while the dark line represents the performance of one of the smaller stocks in the sector — mortgage broking business, Australian Finance Group (ASX:AFG) that may be one for contrarian investors to target. 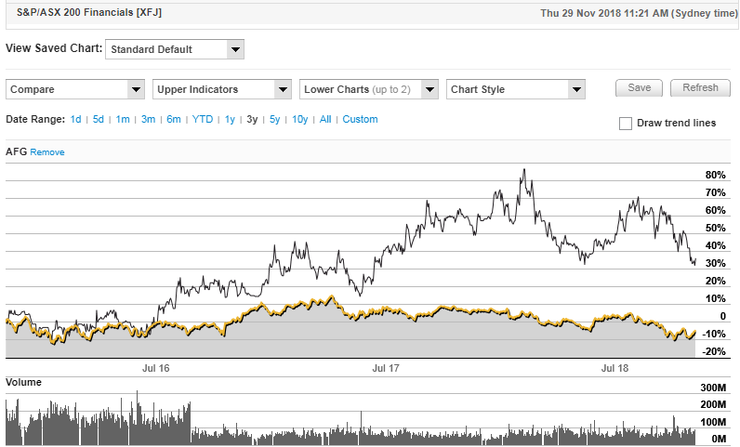 While the chart indicates the decline of the XFJ, arguably of greater importance is AFG's performance over the last three years.

It has substantially outperformed the index since mid-2016, and during this period, the company’s share price doubled from about 90 cents to hit an all-time high of $1.83 in March 2018.

As mentioned earlier, negative sentiment regarding the pending royal commission has buffeted the sector for a good 18 months.

Yet, in the face of this, AFG delivered outstanding results and this was reflected in its share price.

However, particularly in the last three months, the company has been caught up in the royal commission buzz, particularly after a cheap shot — or, perhaps more of a shank — this week from the Commonwealth Bank of Australia’s (ASX:CBA) Chief Executive.

For mortgage brokers, the main focus is on a varied fee structure in terms of remuneration paid from banks.

With that in mind, CBA's Matt Comyn said this week that he supported a change for mortgage brokers to be remunerated via a flat fee paid by the customer — of course, he did.

The emergence of mortgage brokers created competition in the lending market, and from CBA’s perspective, undermined the mortgage broking industry on a national stage.

However, it should be noted that the Australian Competition and Consumer Commission (ACCC) would take a poor view of measures introduced that would reduce competition in the financial sector, particularly given the royal commission is largely aimed at addressing practices that represent flagrant consumer abuse.

It won’t only be the ACCC that goes in to bat for ethical mortgage broking businesses — it will be the very customers that have benefited from obtaining better rates than would have been previously available as the four big banks all but colluded to dictate interest rates.

Consequently, don’t expect the likes of Australian Finance Group to be kicked to the curb, as they are seen as consumer-friendly — so much so that one of Australia’s leading ethical investment funds, Australian Ethical Investments (ASX:AEF), holds a 6.3% stake in the group.

By its own admission, the ‘Comyn problem' CBA needs to address across a broad range of businesses doesn’t relate to mortgage brokers — it's more the ‘inadequate capabilities’ that pervade the organisation, as discussed in this video.

Where CBA ranks in the ethics states

Australian Ethical Investments (ASX:AEF) provides a list of its investment companies, and the CBA's absence on that list is notable.

Given the CBA’s decision to broadside the mortgage broker industry, it's only fair that we illustrate some comparisons between the bank's practices and those of a company like the Australian Finance Group to provide some perspective.

Having paid a $700 million fine for breaches of anti-money laundering and counter-terrorism financing laws that reportedly resulted in millions of dollars flowing through to drug importers, don’t expect the CBA to be reinstated to AEF’s Christmas card list anytime soon.

Mortgage broking businesses rate highly on its financial services list, as do credit unions and building societies which have a reputation for creating consumer value — a far cry from feeding the coffers of shareholders through practices such as charging dead people for financial planning advice, another CBA specialty.

How has Australian Ethical Investments performed in steering clear of the likes of CBA, despite their multi-billion dollar profits? Not too badly... 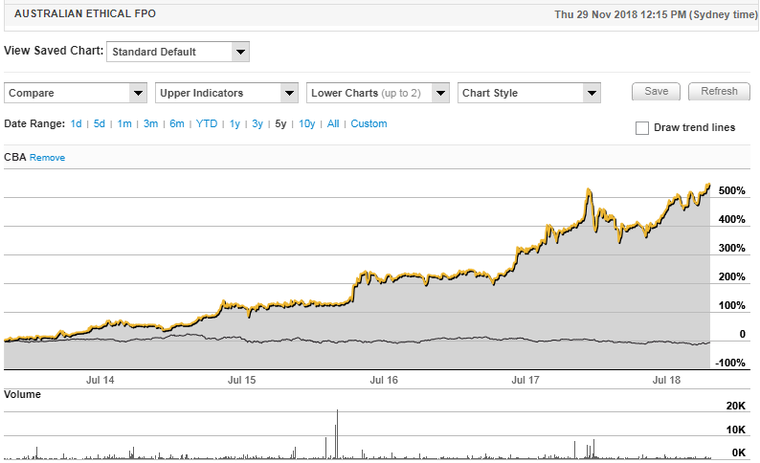 If you hadn’t guessed while examining this five-year chart above, AEF is the yellow line, and CBA — well, it’s the flatline, which Grey’s Anatomy fans would know as ‘not real healthy’ – a patient who has closed their account.

Grey's Anatomy fans understand the flatline all too well...

Just this week, Hartleys analyst, Oliver Stevens, summed up the situation nicely, saying: “Without a healthy mortgage broking industry, we would expect that competition would undoubtedly decline, the major banks would return to their previous levels of dominance, and consumers will suffer through less choice and higher interest rates.”

While acknowledging the tougher industry environment reflected in Australian Finance Group’s recent update, which reflected reduced lodgement volumes, this only reduced Stevens' earnings per share forecast for 2019 and 2020 by about 6%.

Stevens made similar adjustments to the forecast dividends, which he expects will be 10.2 cents per share in 2019.

This is slightly below consensus estimates, but as analysts catch up with the news and crunch the numbers, they are likely to pretty much fall in line with Stevens’ projections.

In any case, a dividend of 10.2 cents represents a healthy yield of nearly 8% relative to the company’s current trading price.

Furthermore, AFG’s dividends are 100% franked, which implies a grossed up dividend of 14.5 cents, a yield of more than 11% relative to a share price of $1.30 — and, yes, well above what the big banks offer.

In fiscal 2018, the company paid an interim dividend and final dividend which totalled 10.4 cents, and it also paid a special dividend of 12 cents per share, bringing the final dividend yield to 15.9%.

This was a year in which investors also experienced reasonable capital gains, with the company’s shares increasing from $1.20 to $1.40, implying a gain of 17%, despite the fact that its shares dipped substantially around June 30, 2018.

Profit from continuing operations was $33.3 million, representing earnings per share of 15.5 cents, implying a PE multiple of less than 10 relative to the current share price.

Consequently, the metrics stack up, but it is also worth examining some of management’s comments, along with trend movements that are contributing to the company’s success.

Commenting on the company’s 2018 performance, chairman Tony Gill said: “The growth in AFG’s profit is reflective of our resilient core business with residential settlements of $35.3 billion representing growth of 3% in a benign credit environment.

“The earnings diversification strategy of AFG Home Loans continues to deliver results for shareholders with settlements of $3.2 billion up 20% on FY17.”

Gill highlighted the fact that AFG continued to generate consistent growth in sustainable earnings, despite challenging regulatory and economic conditions.

This is an endorsement of the group’s strategy of earnings diversification, maintaining an extensive footprint across the financial services industry, whilst also benefiting from the resilience provided by a $145.4 billion loan book and a distribution network of approximately 3000 brokers across Australia.

The group’s diversification strategy will be assisted by this decision to take a 30.4% stake in Thinktank, a group that was established in 2005 and currently has a loan book in excess of $800 million.

This investment provides an opportunity for AFG to broaden its product offering to the small to medium enterprise (SME) sector via a white label commercial property mortgage.

Thinktank’s penetration of the SME market will also be enhanced through its access to AFG’s extensive broker network.

The chart on the left is especially important in terms of the mortgage broking industry gaining support from the likes of the ACCC.

It indicates that the competition and choice generated by mortgage brokers have not just resulted in decreased market share in relation to the big four — it has also contributed to non-majors now having a market share of more than 40%.

Should the mortgage broking industry experience a sustained period of financial headwinds, the fact that the Australian Finance Group had net cash of about $50 million as at fiscal 2018 suggests it would have the resilience to withstand a considerable downturn.

In fact, should the cottage industry market segment of the mortgage broker sector come under duress, a cashed up player such as Australian Financial Group could well take advantage of consolidation opportunities.