In November, Stanmore Coal Ltd was Finfeed’s stock of the week, and at that stage it was trading at 85.5 cents.

Since then the company’s shares have rallied strongly, hitting a 12 month high of $1.13 on Wednesday — a level it hasn’t traded at since 2011.

This gain of more than 30% occurred against a backdrop of extremely volatile conditions in global equities markets.

As the six-month chart below shows, the first signs of a downturn in equities markets emerged in October with the S&P/ASX 200 (blue line) dipping sharply and maintaining a downward trend until mid-December.

In the face of this, shares in Stanmore Coal defied the trend that even rocked Australia’s largest pure coal play, Whitehaven Coal (ASX:WHC), which, as can be seen below (red line), has tracked the ASX 200 index since plunging steeply between October and November. 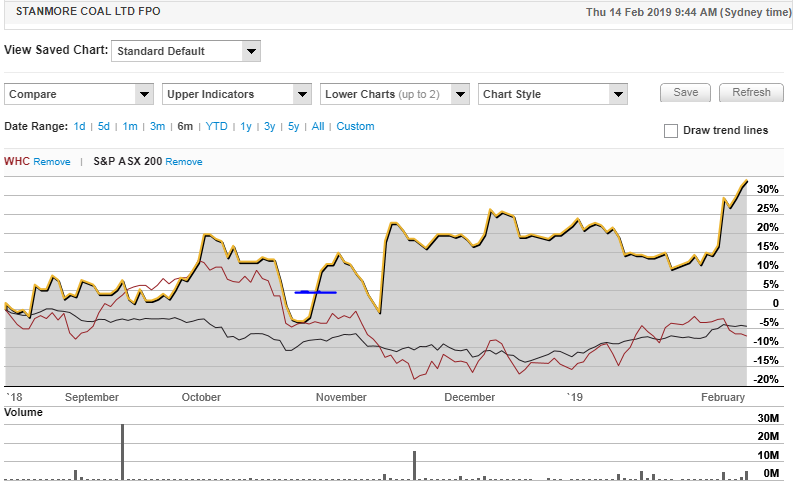 The blue line above shows the level Stanmore was trading at when it was featured as stock of the week in November.

Having to shake off negative market sentiment isn’t new to Stanmore, as investors have steered clear of coal stocks in recent years due to the move towards cleaner energy sources.

While clean and green is definitely the direction to be heading in from an environmental perspective, it still only scratches the surface in terms of the world’s power requirements.

Coal-fired power stations and manufacturing plants can’t be replaced overnight, and the following charts acknowledge that there will be a proportionate decrease in coal usage over the next 20 years, but the significant uptick in world electricity generation will see coal still playing a major role in power generation in 2040. 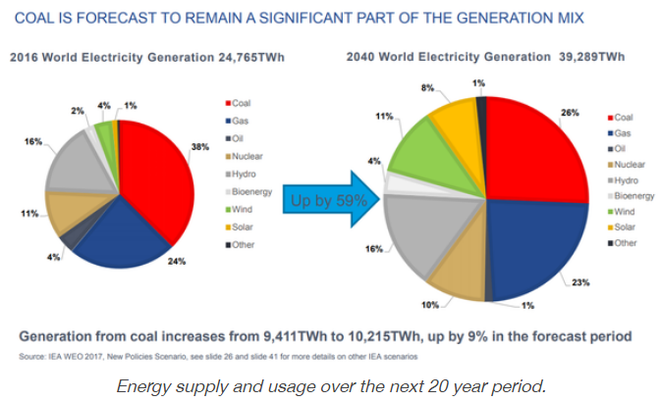 We noted in November that Stanmore acquired the Isaac Plains Project in Queensland at the dirt cheap price of $1.00.

The mine was just too small for one of the majors, and all Stanmore had to do was take care of some rehabilitation and bring the project back into production using the infrastructure that was already in place.

In similar circumstances, this week’s stock of the week, TerraCom Ltd (ASX:TER), formerly Guildford Coal, acquired the Blair Athol Coal Mine for $1.00.

The company’s wholly-owned subsidiary, Orion Mining reached an agreement to acquire the project from the Blair Athol Coal Joint Venture (BACJV) in 2016.

The project is also in Queensland, and TerraCom received $80 million from the vendor to meet rehabilitation liability as determined by Queensland’s Department of Environment Heritage Protection in November 2015.

The acquisition included the mining lease, licences, land, contracts and all mining plant and equipment such as a dragline to deliver the forecast production schedule and the progressive rehabilitation.

All site infrastructure including offices, workshops and stores associated with the mine were included in the transaction.

Coal production recommenced in August 2017 (see below: first wagons being loaded) and by December 2017 the mine was producing at management’s planned annualised run rate of two million tonnes per annum. 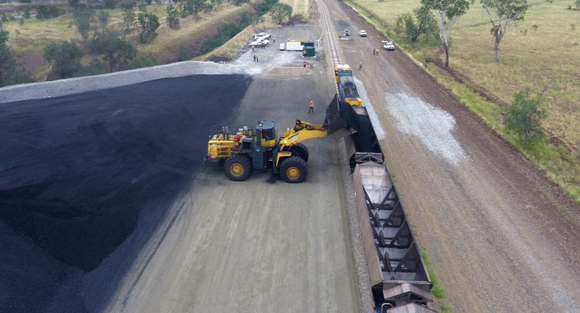 Between acquiring the project and bring it into production, TerraCom had also delivered two resource upgrades, bringing the total reserves to 18 million tonnes and increasing the mine life to nine years.

The next step was to provide earnings predictability by securing offtake agreements, and in May 2018 management announced that it had secured buyers for coal sales of 532,000 tonnes.

This accounted for June quarter production of 462,000 tonnes, as well as 70,000 tonnes from the following quarter.

The average forecast selling price of US$78 per tonne was expected to generate US$41.5 million in revenues.

At that stage it was management’s goal to place approximately 1.5 million tonnes per annum into Japan and Korea with the balance placed into the spot market, providing some exposure to potential upside in commodity prices.

This news set the company’s shares alight, and in the ensuing six months TerraCom’s share price increased 300% from 20 cents to 81 cents, the highest level it hadn’t traded at since acquiring the Blair Athol project.

As indicated below, the company’s share price was buffeted by global volatility in the latter part of 2018, but since mid-November it has rallied more than 20%. 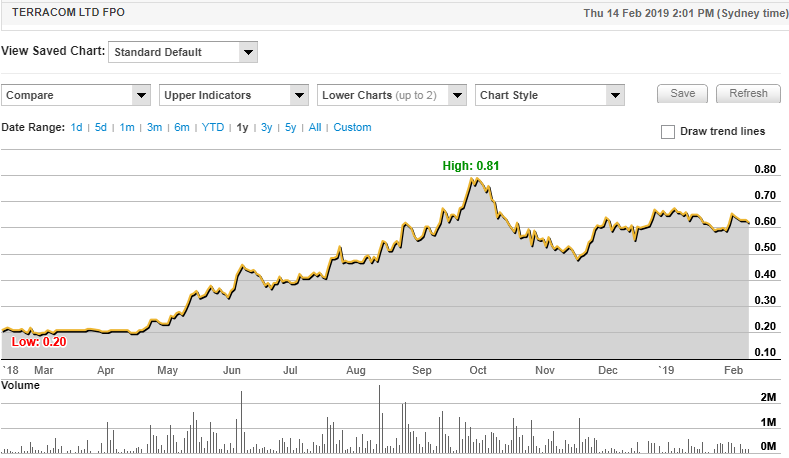 However, there could be more upside to come with analysts at Foster Stockbroking attributing a 12 month price target of 97 cents to the stock after reviewing its December quarter performance in February.

Taking into account a number of positive changes in the group’s operations over the last 12 months, and those projected to occur in the next 12, on, nearly double the $44.1 million that the broker is forecasting for fiscal 2019.

Production up in solid price environment

This translates to coal sales of approximately 1.2 million tonnes for the first half of the 2019 financial year at an average realised price of US$92 per tonne.

The March 2019 quarter coal sales have started strongly with the first shipment for the quarter sailing on January 5, 2019.

On the back of a strong production output in the first half of the 2019 financial year, the company confirmed its guidance that Blair Athol is currently on target to achieve coal sales of 2.5 million tonnes for the full 2019 financial year.

However, one of the most significant earnings drivers over the next 12 months is the expected increase in production at Blair Athol to a run rate of three million tonnes per annum.

Management expects that its revised strategy which should be implemented by the June 2019 quarter should see this run rate achieved.

It is important to note that TerraCom has successfully grown the Blair Athol resource while also achieving increased production.

The Measured Resource has been increased by 44% to 31.5 million tonnes as at December 2018, and the company expects to convert the economic areas of this Resource into Reserves which could add an additional 3 to 5 years mine life.

On this note, Chairman Wal King said, “This measured resource upgrade is significant for the Blair Athol mine as it has the potential to extend the mine life for a further four to five years to up to 13 years at the current production levels.

“The company will now be working towards having this measured resource upgrade converted to JORC Reserves”.

Meeting this milestone would be a likely share price catalyst, which once again brings us back to the issue of valuation.

TerraCom has demonstrated that it can at least meet if not exceed expectations, suggesting that the anticipated production run rate of three million tonnes per annum can be achieved resulting in the company delivering earnings in the vicinity of Foster’s expectations.

Consequently, it could be argued that the company should be valued on fiscal 2020 earnings, especially given that we are approaching the end zone of fiscal 2019.

Even valuing TerraCom on a multiple of 4.2 (in line with Stanmore) translates to a share price of 88 cents, approximately 10% shy of Foster’s price target.

This implies upside of 40% relative to TerraCom’s recent trading range, suggesting that it is capable of delivering a relatively quickfire share price gain, similar to that of Stanmore, as the veil is lifted and the company delivers on expectations.

Mongolia is the wildcard

In TerraCom’s case though, it has an extra trick up its sleeve with its BNU Coking Coal Project (pictured below) in Mongolia starting to hit its straps. 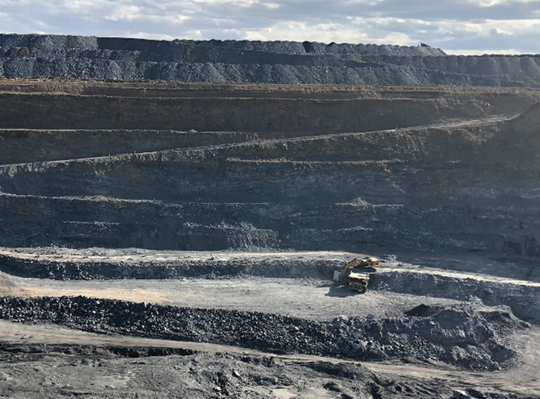 Foster’s noted in February that this area of the company’s operations had underperformed its expectations, but management appears to have addressed the issues that placed a drag on earnings in the second half of calendar 2018.

In an update provided by management six weeks ago it said that the group continued to implement expansion plan in Mongolia which is forecast to incrementally increase production to 3 million tonnes per annum.

In providing this longer term guidance, management also stated that it anticipated coking coal sales of 315,000 tonnes from BNU in the March quarter, implying an annualised run rate of 1.3 million tonnes per annum.

Foster appears to have taken a relatively measured approach with its 2020 projections indicating BNU production of 2.3 million tonnes, increasing to 3 million tonnes by 2021.

Harking back to valuations though, based on values attributed to companies in the resources sector generally, TerraCom’s position as a dual mining operation should work in its favour when comparing it with single mine operators.

Very recently, there has also being an interesting development in China which could be beneficial for TerraCom’s BNU project.

Argonaut analyst, Helen Lau, recently noted that rumours were emerging regarding the banning of Australian coking coal imports at some northern ports in China, apparently based on quotas being surpassed in January.

While there isn’t any evidence to suggest that this could be an ongoing issue, it is a dynamic that works in favour of companies that export coal from Mongolia into China where port restrictions aren’t an issue.

Mongolian coking coal is highly sought after by China, accounting for 43% of total imports.

The other factor to bear in mind is the premium price achieved for coking coal as opposed to thermal coal.

Consequently, if production is ramped up at BNU and the group begins to benefit from a buoyant coking coal price environment it will provide a significant earnings boost. 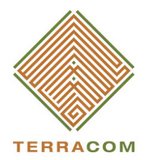