By way of background, Vulcan is aiming to become the world’s first Zero Carbon LithiumTM producer by producing a battery-quality lithium hydroxide chemical product with net zero carbon footprint from its combined geothermal and lithium resource, which is Europe’s largest lithium resource situated in the Upper Rhine Valley of Germany.

The company will use its unique Zero Carbon LithiumTM process to produce both renewable geothermal energy, and lithium hydroxide, from the same deep brine source.

Vulcan has a resource which can satisfy Europe’s needs for the electric vehicle transition, from a zero-carbon source, for many years to come, but just as importantly, it has proprietary technology that provides a competitive advantage and significant barriers to entry.

Looking specifically at the successful test work, lithium chloride (LiCl) concentrates were produced from real geothermal brine that was supplied at ambient pressure from Vulcan’s area of focus in the Upper Rhine Valley.

Two different, pre-selected DLE adsorbents were tested and in both cases the lithium recovery rate exceeded 90% on first pass.

This is an important first step to demonstrate that LiCl can be extracted from the geothermal brine without the need to evaporate the water, or remove the calcium, sodium, or large quantities of other salts.

The Upper Rhine Valley brine is a unique geothermal brine that contains both high grades of lithium and lower impurities compared to other lithium-rich geothermal brines.

Use of renewable power and heat from geothermal brine would make Vulcan the lowest carbon dioxide equivalent footprint supplier of lithium hydroxide for electric vehicles in the world. 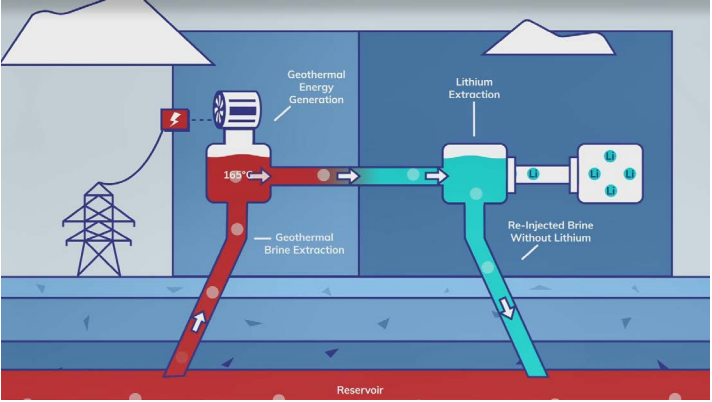 Another step towards pre-feasibility study

Materials and techniques used during the extraction process are similar to those already used in other commercial and near-commercial lithium brine projects.

The tested DLE adsorbents are of a type already used commercially on lithium brines worldwide, which reduces development risk, in line with Vulcan’s strategy of utilising established technologies.

The demonstrated DLE process will result in much reduced water usage and environmental footprint compared to traditional, evaporative methods used by producers in South America.

For example, the evaporative processes used in South America create major waste streams, and also may disturb freshwater aquifers connected to brine aquifers if brine is not reinjected.

The concentration of LiCl concentrate produced from geothermal brine will be further increased using reverse osmosis and mechanical evaporation.

The power and heat needed for these processes will come from renewable geothermal energy which Vulcan will co-produce alongside lithium chemicals.

Different, industry-standard downstream process flowsheets are then available to produce battery-grade lithium hydroxide, with a focus on carbon-neutral processing and minimal environmental and physical footprints.

Results from this test work will be used in Vulcan’s pre-feasibility study.

The results will also be used in tandem with the acquisition and interpretation of exploration data, towards upgrading confidence categories of Vulcan’s JORC lithium resource.

Vulcan has the largest lithium-brine resource in Europe, at 13.95 million tonnes contained LCE at 2 of 6 licences, of which 13.2 million tonnes LCE is currently in the Inferred category on its 100%-owned Ortenau license.

Further control of brine chemistry and optimisation of operational parameters will be carried out, both at bench-scale, and in a ‘live’ pilot study which will include controlling parameters such as pressure and brine chemistry.

In doing so, Vulcan will ensure that the needs of the geothermal plant (avoiding formation of scales) and the lithium plant (optimising lithium recovery) are properly balanced during the development scale-up.

Although Europe is the fastest growing centre for EV battery production in the world, there is no local supply of battery quality lithium chemicals with 80% of the current supply of high carbon footprint lithium hydroxide coming from China. 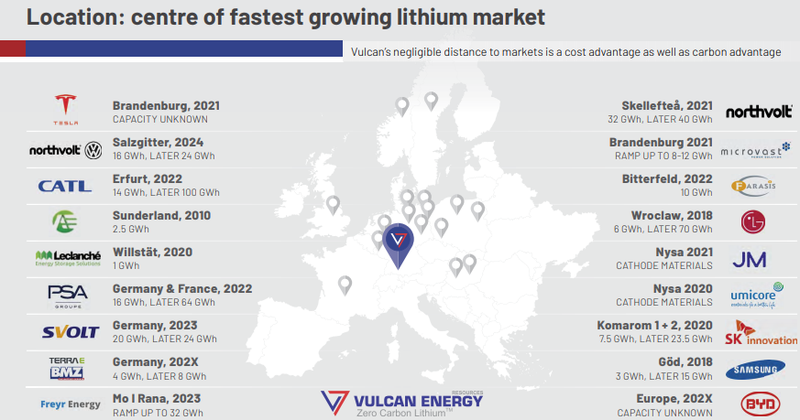 Such a heavy reliance on China at a time when the country’s government is placing increasing strains on established trading partners could be viewed by battery producers as carrying significant risk.

Consequently, they are likely to opt for a product that is better from an environmental perspective, as well as being less likely to carry supply interruptions due to political instability within the country.

Further, there are obvious logistical benefits in terms of proximity to markets with many major auto manufacturers situated in Germany and nearby manufacturing hubs.