The company’s PBX users are now growing by 500 per month and are expected to surge as its marketing goes into full swing around NBN rollout areas. This growth represents a 28% year-on-year gain in PBX users, from 18,700 users in July 2017. 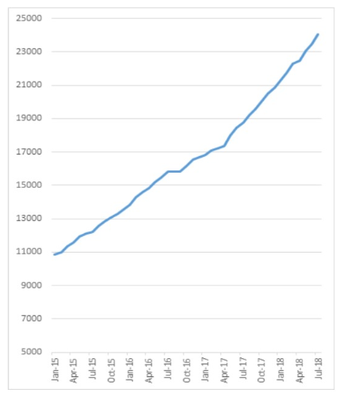 Building on its recent partnership with CounterPath, VN8 will shortly launch its own branded version of Bria (VoIP and video calling software) with its existing suite of VN8 VoIP and hosted PBX services.

This platform will be made available to existing VN8 business and channel customers.

As always, this is a speculative stock so investors should seek professional financial advice if considering this stock for their portfolio.

The company believes there are additional enterprise clients that will benefit from its service offering that it had not previously targeted.

PBX user growth is mainly derived from channel partner sales, a large network of qualified sales partners that VN8 collaborates with. VN8 has launched a trial marketing campaign in the Southeastern Queensland region to acquire data – ahead of major capital cities launch in October 2018.

An update on the marketing trial will be provided in the coming months.

Existing clients of VN8 wholesale will progressively transfer their PBX users over to the company’s hosted platform. This process will be accelerated over the next two months as several major VN8 wholesale clients finalise their switchover to VN8 architecture.

VN8 Managing Director Matthew Fahey commented on the PBX user milestone, “Management is extremely pleased with the growth in registered users over the past 12 months considering the resources allocated towards the Company’s successful IPO in June 2018.

“With the injection of funding, the new marketing campaign and the collaboration with CounterPath, the Company is well positioned to further ramp up its PBX user base which will translate to tangible revenue growth.”