Growth in the PBX user base is a strong indicator of VN8’s business development progress, as it deepens its reach in the multibillion-dollar Australian telco market for SMEs.

The following chart demonstrates the continued consistent growth in PBX registrations that the company has achieved over the past two years. 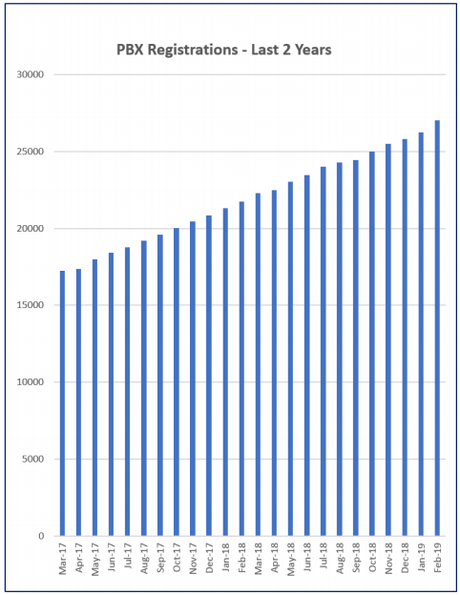 In addition to its strong PBX growth, VN8 has also delivered a record January for new customer orders, up 28% on the same period last year.

Factors initiating this growth include:

VN8 has now targeted, recruited, approved and onboarded 45 new Channel Partners in FY19 to date (with the majority being IT and communications managed service providers) and remains on track to add 100 for the year to on June 30, 2019.

These Channel Partners are accelerating growth in VN8’s business by selling its technology suite, including its cloud based PBX and VN8 branded traditional mobile, internet and business phone systems.

Considering the latest Communications Report from the Australian Communications and Media Authority (ACMA) forecast Australian telco industry revenue to grow from $44 million in FY128 to $47 billion by FY22, VN8 continues to see a positive outlook for sales growth moving forward.