Victory Mines (ASX:VIC) today announced that the results were in from its recently completed desktop reviews on its newly acquired Husky and Malamute cobalt and scandium projects in NSW.

The finalised desktop review focused on analysing and comparing the underlying geology in nearby peers’ tenure, namely that of Clean Teq (ASX:CLQ), Australian Mines (ASX:AUZ) and Platina Resources (ASX:PGM) that have already proven cobalt and scandium mineralisation.

The review was designed to verify if the deposits were prospective through analysing legacy drilling records, evaluating unconsolidated surface geology, studying magnetic imagery and reviewing assets owned by peers for comparable geology.

In summary, the comparative analysis found there to be significant exploration upside with significant cobalt and scandium mineralisation at both the Husky and Malamute projects.

This is notable as several nearby peers’ deposits have JORC compliant Resources including AUZ’s Flemington, CLQ’s Sunrise (previously Syerston) and PGM’s Owendale, while legacy drilling results at Riva Resources’ (ASX:RIR) Hylea project have returned from 0.27% up to 0.85% cobalt.

The below map outlines VIC’s and its peers’ NSW assets’ geophysical signatures: 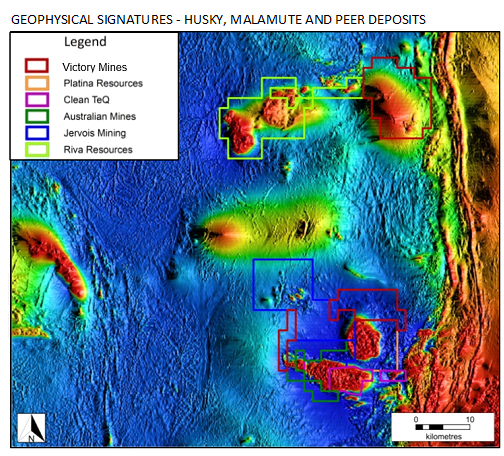 The Husky project overlies the same geophysical signature as CLQ’s Sunrise and AUZ’s Flemington deposits, which have proven cobalt laterite mineralisation. Recent exploration here doubled the cobalt and tripled the scandium mineralisation footprints within the boundary of the magnetic anomaly. The results also showed that the mineralisation was open in multiple directions — a positive upside indicator for the Husky West split tenure.

Backed by findings of the comparative analysis that suggest the projects have significant exploration upside, VIC’s Board is keen to fast-track the exploration plan and quantify the extent of geological mineralisation.

The geology team is now drawing up detailed low impact soil sampling programmes over Husky and Malamute to identify target zones in preparation for future inaugural drilling programmes at the projects.

“The Board is delighted with the findings from the comparative analysis in the desktop reviews for the Husky and Malamute projects. Implicitly, with similar geological sequences to key peers CLQ, AUZ and PGM that have already proven cobalt and scandium mineralisation, it delivers VIC significant exploration upside. Importantly, the region is rapidly becoming an emerging future supply chain hub for cobalt and scandium, against a backdrop of strong global demand for both speciality metals. Moving forward, the Board has undertaken a strategic review and decided the priority will be on the newly acquired cobalt and scandium assets. Plans to optimise VIC’s legacy assets will be announced in due course.”