The last two weeks has been a stellar period for financial technology company, StarGroup (ASX: STL). STL is the only ASX listed company deploying ATM machines in Australia and importantly, the only ATM group with a direct ownership interest in the manufacturer of its ATM technologies, namely NeeolCP, a South Korean private company.

While Tuesday morning’s news regarding the signing of a three-year ATM cash convenience agreement with Goldfields Money (ASX: GMY) is important in its own right, it is worth noting that this builds on significant developments in the last two weeks including an EFTPOS distribution agreement with West International (Sweden), an outstanding fiscal 2016 result featuring growth across all areas of its business, the achievement of record revenue for August and the listing of its ordinary shares on the Frankfurt Stock Exchange.

While the company’s shares bounced 10% during this period some of that gain has been lost during the broader market sell-off, suggesting that it may not be too late to take advantage of this positive news flow.

It should be noted that recent trading patterns are not an indication of potential share price performance and as such shouldn’t provide the basis for an investment decision.

With regard to the Goldfields Money agreement, the three-year/$15 million deal entails STL providing the group with its own state-of-the-art ATM machines to service customers in remote locations where major banks have withdrawn banking services.

As a backdrop, GMY is an Authorised Deposit Taking Institution (ADI) regulated by the Australian Prudential Regulation Authority (APRA). GMY is currently the only Western Australian based ASX listed ADI, and it is looking to become the digital bank of the future, focused on building the business around customers priorities through smart use of digital technologies.

STL’s chief executive, Todd Zani highlighted the importance of the deal saying, “This significantly reduces our cost of funds and is an excellent example of win/win business in that it represents a substantial cost saving over our present cash bailment arrangement and is also a diversification of income for Goldfields Money in relation to its present activities”.

The benefits of the relationship between the two groups is likely to extend further with management saying that it would be working closely with GMY on other financial products which will assist STL in becoming a key player in both the ‘cash out’ and ‘cash in’ cycle within Australia.

STL will install its ‘bank in a box’ Recycler ATM in GMY branches with the first installation scheduled for early October 2016.

These developments further strengthen the group in terms of being able to build on what was an impressive fiscal 2016 performance as highlighted below. 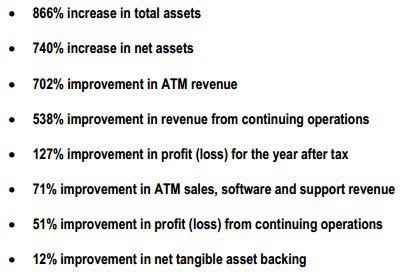