After announcing last Monday that it had achieved another record month of revenues from its ATM network, Stargroup (ASX: STL) informed the market today that it has listed its ordinary shares on the Frankfurt Stock Exchange (ticker code S33).

This will provide the financial technology company with significantly increased access to capital as well as generating broader retail investor interest in the stock.

In relation to the dual listing, STL’s chief executive officer and executive chairman, Todd Zani said, “Listing STL in Europe provides the company with access to larger and deeper pools of capital, continues to raise the profile of the company’s growing technology business and enables the formation of strategic relationships that will help further expand our target market globally, while also enabling European shareholders to purchase shares in their own time zone”.

Enabling trading in its shares in the Northern Hemisphere makes sense given the company’s geographic diversification which recently included a five-year EFTPOS distribution deal with West international AB, a public company listed on the Swedish stock exchange, which facilitated distribution of terminals in Australia and New Zealand.

It should be noted however that the Northern Hemisphere holds the same share price fluctuation risks as does the ASX and professional advice should be sought if considering this stock for your portfolio.

From an operational perspective STL has been going from strength to strength as evidenced by the substantial increase in revenues outlined below. 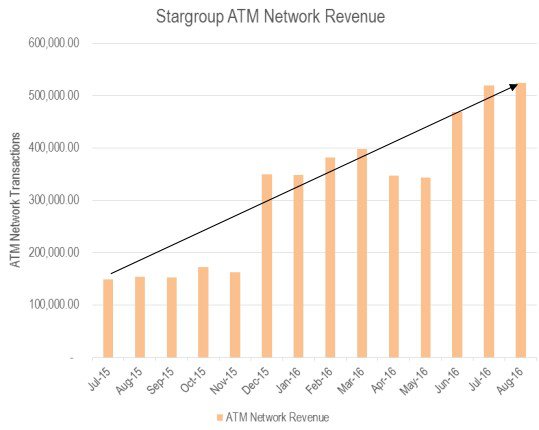 Management expects this to lay the foundations for another record quarter of revenues which would represent the eleventh consecutive quarter. 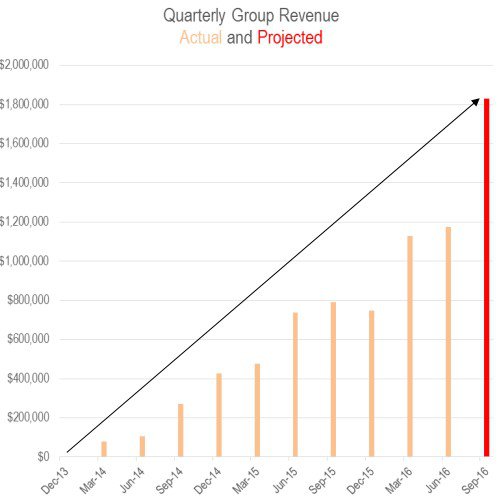 The number of active ATMs on STL’s network at the end of August was 356, a 2% increase on the prior month. July was a record sales month for the ATM division and with a number of installations scheduled for September, the company should continue to set new records.

On this note, management said that it has recently taken delivery of another container of ATMs from NeolCP Korea in order to keep up with its internal sales pipeline, as well as meeting the increasing demand for ATM hardware sales to other deployers which are also at an all-time high.

Zani said, “We continue to pay back our capital from each ATM 15 months from purchase and given our recent increase in scale we are in a strong position to review some of our key supply contracts in the business to further reduce cost of goods sold and improve our profitability”.

Providing further promise is the fact that the group is already experiencing a high level of enquiries from payment industry participants that are eager to gain access to the source code and EFTPOS technologies that STL’s subsidiary, StarApps has agreed to distribute in Australia and New Zealand.

This will allow STL to finalise its core development with Anthem Software for a 16,500 business network, enabling it to commence the major deployment of EFTPOS hardware to those customers.

On the score of gaining access to the source code and working with technology partners, Zani said, “The Board of STL is excited at the level of enquiries being made, as at present the major banks have traditionally kept this code to themselves or limited its access to others”.

He believes this will free the group up to engaging further talks with the likes of Apple, Samsung and any other payment technology company trying to break into the Australian market whilst avoiding the need to partner with the majors.

In terms of industry dynamics, a recent report released by the Australian Payments Clearing Association showed that the number of ATMs in Australia has increased by 2% in the last quarter, bringing the total number of ATMs to 32,156.

While the following chart demonstrates less rapid growth since the strong run between 1994 and 2004, there remains enough momentum to drive organic growth for STL which will serve to complement its rollout of new terminals in existing geographic regions, and in particular the new revenue streams that can be harnessed by expanding globally. 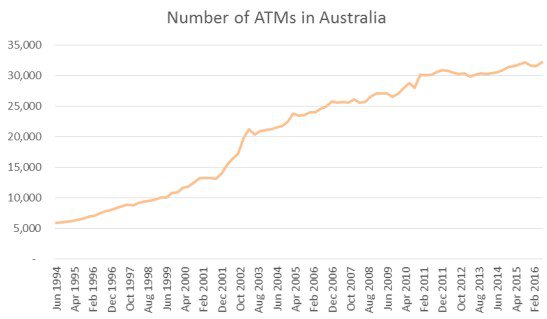 In terms of industry trends, Zani highlighted that ATM numbers are continuing to increase, underlining opportunities available to STL given that there were 351 branch closures by the major banks in the last 12 months, while at the same time the number of ATMs in circulation as well as transactions per ATM continued to grow.