ATM player Stargroup Limited (ASX:STL) has had a record month, and has taken aim at its nearest competitor in the space by claiming STL has market-leading average monthly transactions.

In terms of raw number of transactions though, it had an 11.49% bump as it added more machines to its network.

“The transactions on our ATM network were 11.49% up on the previous month which is a direct result of the ramp up of our ATM network as it begins to mature,” STL CEO Todd Zani said.

“It is also a reflection of our concentrated and disciplined efforts to only place our hardware in high quality space.” 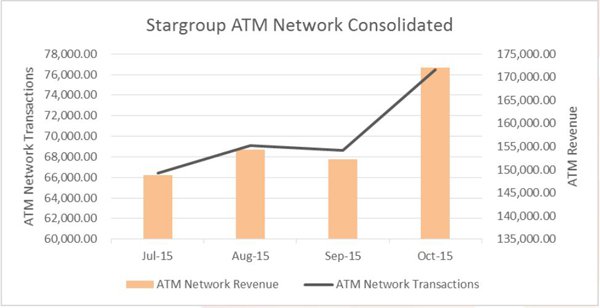 Transaction and revenue growth for STL

He also said taking into account the recently announced acquisition of Cash Plus Australia and its 109 ATM machines, that its annual gross revenue could reach upwards of $5 million.