While a Memorandum of Understanding (MoU) in relation to the acquisition was signed in September, final terms have only just been announced. These appear extremely favourable from a number of perspectives.

Firstly, the acquisition is being fully funded by debt which implies zero earnings per share dilution. Also, the acquisition multiple appears attractive at less than four relative to projected annualised EBITDA of $1.7 million.

However, potential investors should note that STL is still an early stage play and earnings projections may not be met and as such should not provide the basis for an investment decision. Those considering STL should seek independent financial advice.

Combined revenues from the Switch, Telco and Sales businesses will increase STL’s current annualised revenue from its ATM division from $8 million to $12.1 million with management expecting that figure to increase to $18 million by fiscal 2018 as a result of organic growth.

STL’s Managing Director, Todd Zani, highlighted the strategic benefits of the acquisition in saying that it strengthens the company’s vertically integrated model.

To a large extent, this is facilitated by its direct ownership interest in the manufacturer of its ATM technologies, namely NeolCP, a South Korean private company.

This development builds on what has been a transformational year for STL as highlighted below. 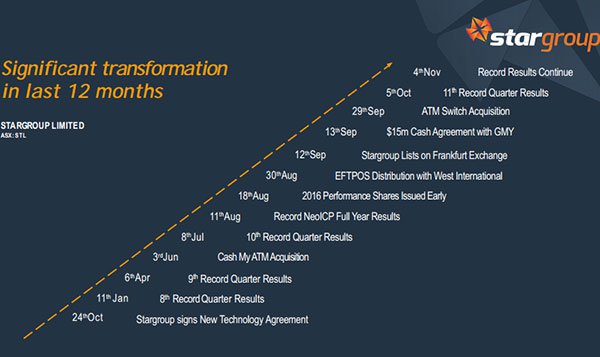 In August 2015 STL became the exclusive distributor of the cashPod ATM range, including the recycler ATM, back-office and payment technologies in Australia for the next five years.

Other affiliations include the group’s wholly-owned subsidiaries, StarPOS and StarApps, which embed STL’s position as a provider of EFTPOS and payWave technologies and developer of the source code in its terminals via its five-year distribution agreement with West International AB, a Swedish NASDAQ listed company. This enables STL to distribute next generation EFTPOS payment terminals and solutions in Australia and New Zealand.

Zani said STL was on the lookout for further merger and acquisition opportunities, noting the $15 million debt facility leaves considerable head room for such initiatives. 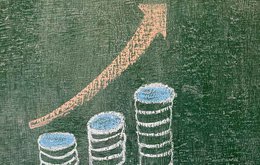 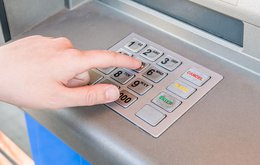 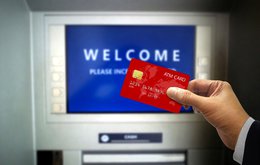 Stargroup MOU paves the way for sharp uptick in revenue