Following the successful completion of extended trials at Bondi Beach, with the support of the New South Wales Government, Clever Buoy is now ready to be rolled out beyond Bondi’s borders.

The pre-commercialisation trial was conducted from February to April and since completion of the trial Shark Mitigation Systems has been invited by several councils and municipalities to submit proposals for deployment of Clever Buoy Systems in Australian and international waters.

Clever Buoy was recently endorsed by the Australian Professional Ocean and Lifeguard Association (APOLA), as a viable shark detection and alert solution to be used throughout Australia’s beaches.

APOLA was instrumental in the Bondi trials and the application of information from the Clever Buoy system.

APOLA’s endorsement holds considerable weight. It stated that the Clever Buoy shark detection system is currently the only commercially available detection system capable of development in high surf zones to provide real time information for lifeguards that will be of direct benefit for users.

Clever Buoy is a non-invasive technology that eliminates the use of nets and protects beachgoers, the environment and sea life.

The technology uses state of the art sonar and identification systems which relay critical information. It is designed to be set up beyond surf zones and utilises multi-beam sonar transducers mounted on the ocean floor coupled with newly developed detection software to scan for marine life.

Once marine life is detected, the software then analyses swimming patterns to determine the probability of a shark occurrence. If there is evidence of a shark, the information is transmitted to lifeguards notifying them of the target and location. 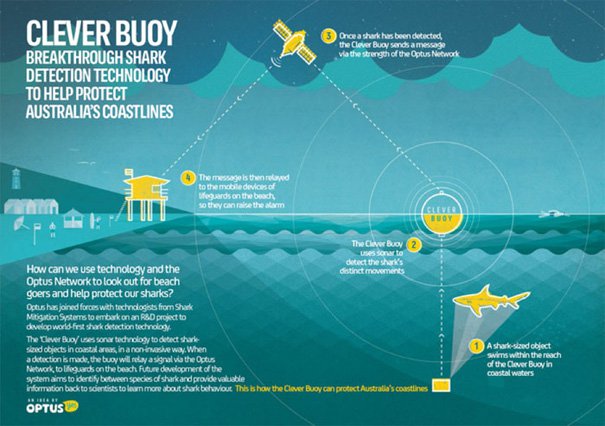 “The trial has validated the stability and robustness of our current Clever Buoy platform to sustainable operate in real-world Australian beach conditions 24 hours a day, 365 days a year, autonomously detecting and alerting the presence of large sharks that could be a threat to beach users.

“SM8 considers the Clever Buoy system to be commercially available. It has a cost structure that is conmo0etitive with alternative options on the market, and has received global expressions of interest for deployment.

“Following the successful trial, beachgoers in many parts of Australia and indeed in other countries can now look forward to safer beaches as we move to deploy this technology in response to growing demand.”

SAMS shark repellent technology lies in development of materials having a specific contrast, colour, size and shape according to the position of the wearer in the water column and the distance that a shark is likely to perceive the wearer.