In June 2016 comprehensive independent trials of the technology were commenced by the University of Western Australia Oceans Institute.

The trials were conducted within a known active population of white sharks, and with the benefit of observing several encounters the Institute was able to provide a statistically valid data set for robust scientific evaluation.

The independent analysis of the data was completed, and the results of the study scientifically validated the effectiveness of the technology as an effective deterrent in respect of mitigating the risk of shark attacks.

This is early stage technology and a young company, so investors should use this information in conjunction with all available company information and seek professional financial advice when considering this stock for their portfolio.

SM8 has developed a visual deterrent technology as well as a shark detection device, both of which are non-invasive and not harmful to sharks. It is the company’s intention to develop and commercialise these technologies, as well as establish a pipeline of further innovative marine technology. 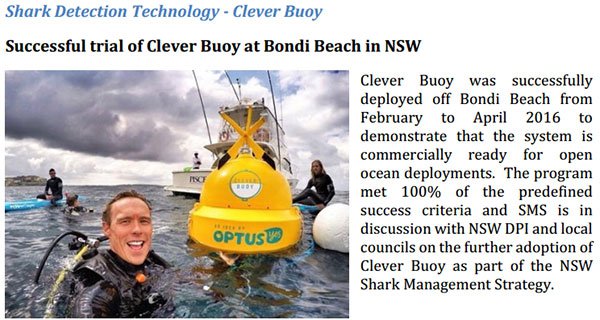 Commenting on the completion of recent testing, SM8’s co-founder and director Craig Anderson said, “The results from this field study represent an exciting outcome and critical milestone for the company, and given that it now has scientific validation from a statistically valid field test, it proves this aspect of our technology is effective in reducing the risk of shark attack”.

Anderson highlighted that having identified new aspects of large predatory sharks’ visual systems, the company has been able to develop the disruptive SAMS technology coloration pattern which has delayed the time taken for a shark to engage by up to 400% on average in comparison to black neoprene.

Results viewed as compelling with practical applications by University of W.A.

Professor Shaun Collin of the Oceans Institute at the University of Western Australia described the outcome as compelling, particularly given that it can potentially make an impact on practical outcomes.

One of the interesting prospects on the horizon is the adoption of SM8’s technology at a commercial level with the possibility that its use may become mandatory under Occupational Health & Safety standards.