As the multi-disciplined advertising group commences the second half of fiscal 2020 (EN1 reports on a calendar year basis), the generation of $10.3 million in income represents a very strong start.

As the following bar graph shows, not only has this been a substantial outperformance relative to the previous corresponding period in 2019, it is more than 50% up on the same period in fiscal 2018. 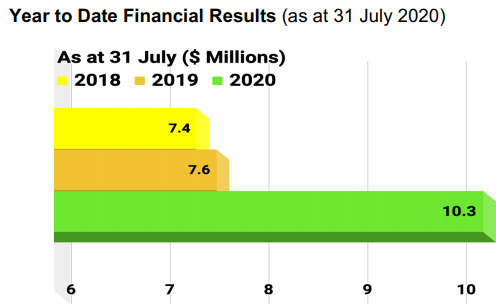 This comes hot on the heels of the company generating revenues of $9 million for the six months to June 30, 2020, up nearly 50% on the previous corresponding period.

This was an outstanding performance given that the company has had to deal with the impact of COVID-19, particularly in the June quarter.

With the company having branched out into new areas and management making decided changes in the last six months to right-size the business, there could be further good news ahead.

It is worth noting that the advertising industry traditionally generates up to 70% of its revenues in the December half, and this degree of seasonality has been indicative of EN1’s past performances.

This suggests that EN1 could substantially exceed first half revenues, particularly given that in July alone the group has already overtaken income received in the prior six months.