SECOS cashing in as shift to bioplastics ramps up

Sales for the quarter were up 39% on the prior year to $1.7 million, while cash flow improved by $0.5 million on the September 2017 quarter.

But the stand-out highlight came from the growth in the company’s bioplastic resin sales, which grew by 296% on year. And this is where the company is anticipating strong growth going forward. Further to this, positive feedback from prospective packaging customers in the US, Europe and Asia provides confidence in continued growth in SES’s global bioplastic resin sales.

The company commenced bioplastic resin production at its new Malaysian bioplastic plant in July this year. It has delivered initial orders to local customers and is now ramping up production to meet growing demand.

The new 30,000sq ft. facility is ideally located close to Malaysia’s largest port, and will provide the company with additional capacity and sales to meet the growing global demand for bioplastics.

Additionally, trials of SECOS’s bioplastic resin have been approved for commercial supply to major bag makers in Malaysia. This generated significant interest from other bag makers, who are keen to source locally made bioplastic resin to comply with the regulatory ban on all single use traditional plastic bags, coming into effect in Malaysia on 1 July 2019.

The company’s sales growth, particularly in bioplastic resins, is underpinned by the continuing global shift to bioplastics — an annual industry sales expected to grow by 15% and to double to $6 billion by 2023. 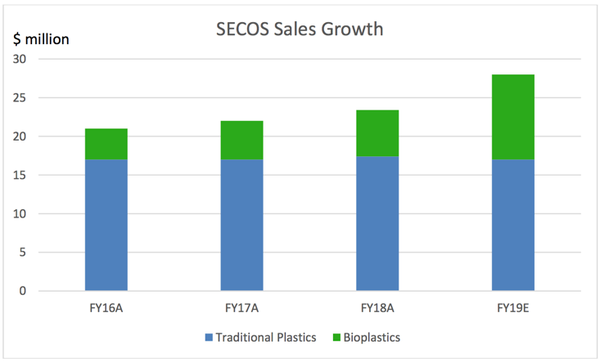 SES ended the quarter with $0.5 million in cash. This excludes a placement and rights issue announced on 23 October 2018 to raise up to $3.8 million before costs. A further $2 million cash will come in during November 2018 from settlement of its Malaysian land and building sale, following the repayment of $1.3 million in debt at settlement.

SES will consider further cost-saving initiatives during the year and believes further improvements are possible.

Net cash outflow from operations was $0.7 million — this is an improvement over the previous quarter while investing in the start-up of the new bioplastic resin plant in Malaysia. Operating cash outflow for the September quarter improved by $0.5 million year-on-year.

SECOS Managing Director, Stephen Walters, said: “The start of production from our new bioplastic resin plant in Malaysia was an exciting milestone for SECOS, which should enable us to meet growing demand for our resin products at improved margins. We will be ramping up production of both our Malaysia and China plants to keep pace with growing global demand.

“We are undertaking a review of our Australian subsidiary Stellar Films to identify how to best utilise the assets going forward, given our strategy to be a world leader in bioplastics.”